Those are just some of the things you can expect from Legend of Raven, an upgraded version of indie fighting smash Yatagarasu for PS Vita.

Created by a team of ex-King of Fighters developers, and featuring eight characters designed by KoF legend Kotani Tomoyuki, Legend of Raven boasts a solid backbone of fighting talent. 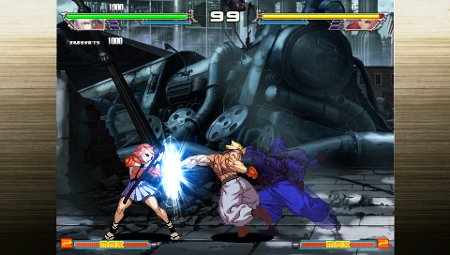 Set in Japan in 1926, the game is about powerful assassins beating seven shades of pixels out of one another via unique sets of special moves.

You'll need to learn defence as well as attack if you want to prove you're the best. You'll have to time parries just right to open up your foe to a devastating counter-attack.

The Vita version of the game features new "parallaxing" backgrounds, a new soundtrack, and ad hoc versus play, all of which sound pretty cool.

We don't have a release date or pricing information for Legend of Raven yet. Rest assured, though: as soon as we find out anything more about the game, we'll punch the details right into your face. Or something like that.

Until then, why not check out the Legend of Raven screens in the gallery at the top of this page.

Think you've got what it takes to narrate a fighting game? Prove it, and you can wind up in Legend of Raven