Nexon’s KonoSuba: Fantastic Days is finally launching today for iOS and Android devices and things are being kicked off with a live showcase event on KonoSuba’s official YouTube channel today at 11 am PDT/ 2 pm EDT, so be sure to tune in!

The event will be hosted by Jacki Jing and Malik Forte, but you will also see popular faces from the anime world, like CDawgVA, Gigguk and TheAnimeMan. Watch the live event and be treated to some awesome exclusive content, interview, game storylines and more! 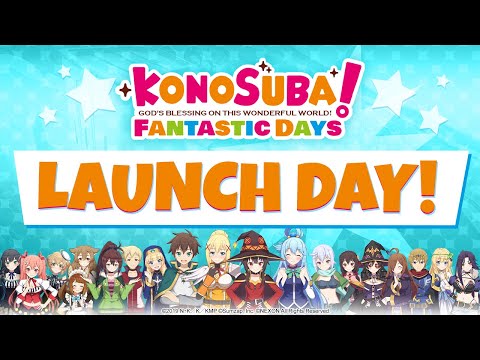 KonoSuba: Fantastic Days is a game based on the hit comedy anime series that can be streamed on Crunchyroll and HBO Max. KonoSuba has been in the pre-registration phase for a while and has already amassed over a million pre-orders.

Okay so let’s talk about the event. You can expect to see a sneak-peak of what’s in store when the game officially launches and interact with some of the voice actors like Jun Fukushima and Sora Amamiya who will discuss the whole voiceover process. The showcase will also feature some tutorials so that players can jump right in when the game launches. You’ll get an in-depth breakdown of the storylines and all the characters before learning about the equipment setup and how the Arena system works.

I think the coolest part about KonoSuba: Fantastic Days, and this is something fans of the show will love, is the fact that all the original Japanese actors will be voicing their original characters from the show! So, Jun Fukushima, Sora Amamiya, Rie Takahashi, and Ai Kayano will reprise their roles!

The game will follow the show's original storyline but will also diverge and create some amazing and original stories with brand new heroes and heroines as well.

What are you waiting for? Enter the world of KonoSuba by downloading it on the iOS App Store and Google Play Store.

Check out the top 25 RPGs you can play on iOS devices!
Next Up :
Ninja Must Die is an upcoming combat-focused action runner with stylish ink-based visuals, now open for pre-registration