Knightin'+ is an upcoming puzzle-adventure game that's heading for iOS and Android tomorrow after it initially launched on Steam all the way back July 2019. The game has been developed by Muzt Die Studios whilst publishing duties will be handled by the prolific Crescent Moon Games.

Knightin'+ has been described by the developer as a Zelda-lite adventure where you'll play as Sir Lootalot as he battles his way through numerous dungeons, which will be littered with traps, puzzles and magical artifacts.

As you might have already gathered by the protagonists frankly excellent name, Knightin'+ has a tongue-in-cheek story that isn't supposed to be taken too seriously. Instead, it looks to pay homage to the games from the 90s it draws its inspiration from. That means you can expect pixel art graphics and a catchy soundtrack, which you get get a sample of from the tweet above. 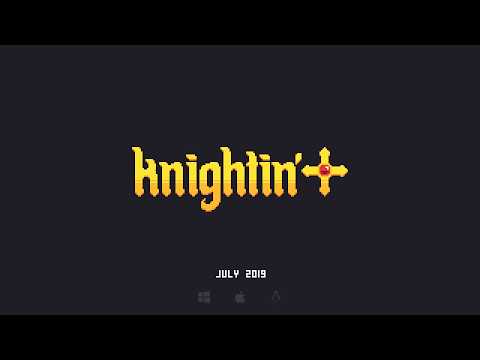 In terms of gameplay, you can expect to be exploring dungeons to collect loot and unlock new abilities. This will be made more difficult by a bunch of monsters that you'll need to fight and puzzles that will need solving to progress. You can also expect to battle against a tough boss too before heading to the next dungeon. You can check out some gameplay from Knightin'+ in the embedded trailer above.

Knightin'+ is will release on the App Store and Google Play tomorrow, with pre-orders available on the former right now. It will be a premium title is available for 25% off during the pre-order period.

Looking for more action games to play on your phone? Here are 25 of the best available for iPhone and iPad
Next Up :
Global Exclusive - Text Express: Word Adventure is a crossword game with a narrative twist, coming to mobile on September 1st