Knight Fright is a cube hopping roguelike where players must rid the kingdom of a nasty curse, available now for iOS

There are few clear influences from older games on display

Knight Fright is a roguelike game from independent developer Atooi that's available now for iOS devices as a free-to-play title. It sports a familiar voxel aesthetic that the developers have used in their previous games Totes the Goat and Mudd Masher.

Get your spook on with Knight Fright, an addictive rogue-like monster stomper that is free on the Appstore!https://t.co/KHCrHaNyOk pic.twitter.com/wzamlnHODy — Atooi (@AtooiLLC) October 12, 2020

The game takes place in a kingdom that has recently been invaded by a plethora of ghosts, ghouls and goblins who want nothing more than to bring misery to the land. It'll be up to you to wade bravely into battle against them and vanquish the threat they pose.

Not only will you be looking to leap on the heads of your foes, but you'll also be aiming to restore life to the world by jumping on each square to make it return to its former glory. You can check out some gameplay for Knight Fright in the embedded video below. It reminds me a lot of an old game called Cube Hopper that I used to play a lot of many years ago. 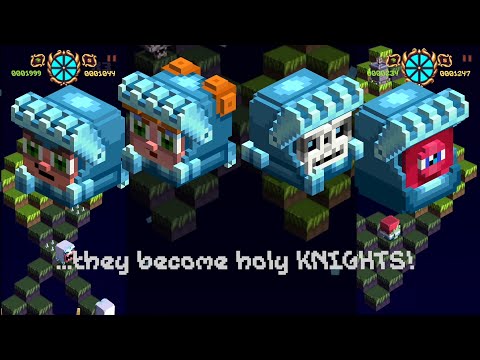 Each run of the game will consist of trying to cleanse eight of these blocky stages from the curse that has afflicted them. However, you'll need to carefully watch your step as one wrong move will strip your knight down to their undergarments – Ghosts N' Goblins style – and another will see them perish meaning you'll have to start over again.

Knight Fright is available now over on the App Store. It's a free-to-play game with various in-app purchases, one of which will remove ads for $1.99.

On the hunt for more action-packed games to play on your phone? Here are 25 of the best you'll find on iPhone and iPad
Next Up :
Critical Ops is celebrating its 3rd anniversary and hitting 100 million downloads