There's always room for the experimental here at Pocketgamer.com. Playables' KIDS is a fine example of this. It's a black and white experience based around group-think, IE the compulsion that we all get to follow what others are doing, swarming like bees or acting like a herd.

It's from the duo (director and animator Michael Frei and game designer Mario von Rickenbach) behind Plug n Play and Finger Simulator. Similar to the former it's also a puzzle game dressed up as small artistic moments, and the peculiar commentary on the human form and human ways also manages to permeate most moments. That said, KIDS certainly seems to be much more about birth and death vs Plug n Play's sexual innuendo. 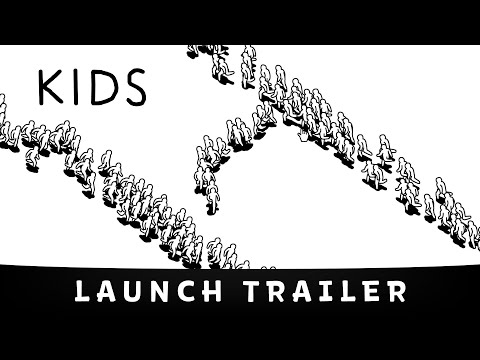 As much as it is about crowd psychology, or how dangerous and strange it is, sometimes it is just a wonderful little interactive piece which is fun to click around within. I played through the entire experience while at EGX Rezzed earlier on in the year, passing through most of the levels in a thirty minute session. While it certainly feels like it's building to a finite end, KIDS is very much closer to an art installation, if it was left alone on an otherwise empty coffee table then it wouldn't feel out of place and people would wander over to it to ponder and play it.

Publishing duties for KIDS were handled by Double Fine, marking the second time that they have stepped into the experimental game publishing space. The first was with the exceptional shape-shifting experience Everything, which launched two years ago for PC, and earlier this year for the Nintendo Switch.

KIDS is available now on the App Store, Google Play Store, and also on PC.

If you're looking to be kept up to date with the latest news then check out our news section.
Next Up :
Urban Trail Pocket, a fast-paced stunt performing game launches tomorrow on Android and iOS