Marmalade Game Studios has just announced JUMANJI: The Curse Returns, launching soon for both iOS and Android devices with pre-orders now available. The iconic board game comes to life in today's digital world in a casual co-op adventure, letting up to four players dive into the popular franchise to save the town of Brantford.

JUMANJI: The Curse Returns is based on the 1995 film that brought lots of thrills and excitement to audiences the world over. Now, 26 years later, the classic comes back with a vengeance featuring co-op card matching and easy time-attack mechanics. Players will have to roll the dice, read the riddle that appears, and brave the challenge, whether it's an angry elephant charging towards you or a stampede of zebras escaping from hunter Van Pelt. All four players must reach the center of the board game to win. 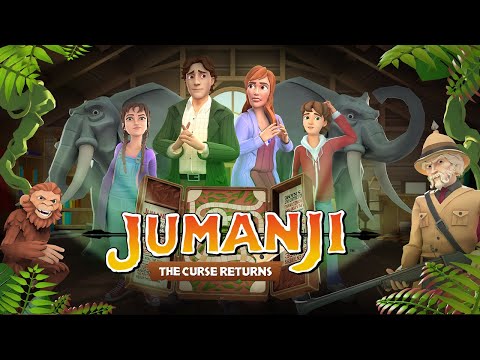 "Jumanji is a board game with a difference. It reaches beyond the board, right into our imaginations, and we’re delighted to be bringing it to life on mobile," says Mike Willis, CEO at Marmalade Game Studio. "With every one of our digital games we strive to recreate the feel of the original. For Jumanji, that meant basing the experience on the 1995 film. We can’t wait to release JUMANJI: The Curse Returns on iOS and Android. It’s a real hybrid of gameplay styles and there’s nothing like it in the App Stores at the moment. We know you’ll have fun playing it with your friends and family, wherever you happen to be."

JUMANJI: The Curse Returns will officially launch on November 17th on the iOS App Store and on the Google Play Store at £2.49, with pre-orders now available.

Eager for more co-op fun with online buddies? Why not take a gander at our list of the top 28 best multiplayer games for Android phones and tablets?

JUMANJI: The Curse Returns adds a new card mechanic to the digital board game, with a limited 75% off discount on the app stores

JUMANJI: The Curse Returns tasks you with saving the town of Brantford, out now on iOS and Android