Infinity Conquer lets you play as legendary rulers and build your army, currently in its beta phase with pre-orders now open

By Catherine Ng Dellosa
| May 24

Infinity Conquer is an upcoming strategy war game on mobile that's currently in its beta phase across certain regions. Now available for pre-registration as well for both iOS and Android devices, the game features hundreds of heroes players can collect as they build their armies and conquer lands across different civilisations.

In Infinity Conquer, players can expect to experience a clash of epic proportions as they fight alongside legends and change the course of history. Players can team up with their online buds and forge strong alliances to take down enemy teams in glorious warfare. They can also set out on various expeditions to explore the farthest reaches of Ethossus.

Legendary rulers include Catherine the Great, Attila the Hun, King Arthur of Britain and so much more. Players can then amass their army under these rulers, join Guilds, unite with other like-minded individuals and engage in real-time GvG battles. 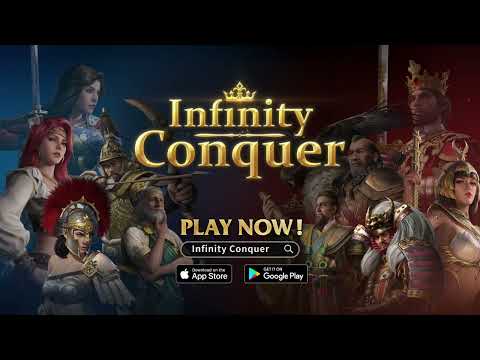 The game has recently launched its very first closed beta test on May 6th, and if you're keen on learning more about the game, you can join the community of followers over on the official Discord channel to score exclusive goodies as well.

For now, you can check out Infinity Conquer on the iOS App Store and on the Google Play Store for Android devices. It's a free-to-play game with in-app purchases. You can take a little sneak peek at the embedded clip above to know more about the game's visuals, mechanics, gameplay and aesthetics. The official TapTap page also has updated dev blogs to help you stay in the know.

Next Up :
Gunship Battle: Crypto Conflict launches Beta phase of TITANIUM Trade Shop to give players more control over the economy