Android
| In The Rural Village of Nagoro

While we're often well aware that less is more, it's never easy to achieve such minimalism especially when it comes to video games. Thankfully, there's indeed beauty in simplicity with the way The Rural Village of Nagoro is designed - more an experience rather than a game per se, the narrative journey is a short-but-sweet walk down the stone pathways of memory, nostalgia, and what it means to leave a legacy that lasts long after we're all gone.

IN THE RURAL VILLAGE OF NAGORO VISUALS

The side-scrolling visual novel of sorts features adorable hand-drawn visuals that highlight the lighthearted and carefree life in the titular village. Typical of Japanese anime, the characters have an adorable "kawaii" and "chibi" appeal to them, as players step into the shoes of a young girl leaving her humble home and walking down the street while greeting the neighbours she passes by along the way.

The walk to your school is short, but not one without smiling faces and interesting NPCs. The backdrop itself as you walk from scene to scene offers a relaxing and lovely vibe given its painterly landscapes. When you add the elderly townsfolk greeting the morning with some idle chitchat, the farmers taking a break with a quick drink, and the little ones buzzing to life as they chase each other down the road to school, you'll have no problems settling into the rural town like a snug pair of warm and fluffy slippers.

THE GAMEPLAY OF IN THE RURAL VILLAGE OF NAGORO

There's nothing much to do throughout the game except move in one direction and press the "F" button to interact with the NPCs after some prompts. There's no menu here - no timers, no inventories, no items - as all you'll have to do is walk slowly from one end of the screen to another while saying "hi" to the neighbours you pass by.

The walk is slow and deliberate, likely because the game wants you to enjoy the trip and to really focus on the neighbours greeting you with such a zest for life. The background music also lulls you to a false sense of security, because even as I was going through the game per scene, there was a sense of impending doom in the air. I couldn't help but feel like I was in for an emotional blow pretty soon - it was only a matter of time.

True enough, when you reach the end of the morning as your first class of the day starts, everything fades to white, and these words fade into view: "This place used to be full of young children."

Now, I normally don't like writing spoiler-y reviews, but to not talk about the second half of this game would be to do it an injustice. If you'd like to experience the quick 15-minute narrative yourself, avert your eyes now. 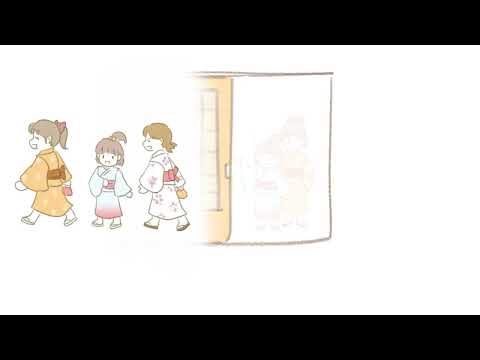 If you're still here, then you should know that the ending of this game is a doozy - especially because it's based on a true story.

As the second half of the game begins, things suddenly change - you're met with this twist of a woman suddenly crafting a doll of a little girl and placing her on the chair in a classroom that, just seconds ago, was filled with bubbling children. Now, you'll be forced to walk through every excruciating scene from where you ended back to where you began. The game forces you to walk by every single place you passed by just moments ago - only this time, there are no old grandmas wrinkling their happy eyes at you, no businessmen in suits waiting for the bus at the shed, and no mother waiting for you at home to hand you your bento box.

All that's left are lifeless dolls scattered throughout every house, desperately trying to simulate the life the village once had.

While it all may sound like a scene from a horror movie, the game doesn't want to focus on that - what it does lean on is the tragedy of what befell this little village, and the emotional tale of one Ayano Tsukimi.

Known as the "Valley of Scarecrows", the village of Nagoro was once a bustling town, but as people moved on to the big city and as the elderly residents passed away one by one, Ayano Tsukimi dealt with her sadness and nostalgia by crafting scarecrows that would commemorate the lives of her lovely neighbours. What began as an initial attempt to ward off crows grew into a tourist attraction in Japan.

The game is, to be honest, too short to be critiqued too much. But as it ends, it offers tidbits and trivia about the village and the real life of Ayano Tsukimi, urging players to visit the town with the idea that they might just chance upon her in their travels. I found this tourism effort by a volunteer indie developer extremely impressive - to promote such a lovely thing with an unconventional method via a video game.

It's incredibly effective - I even found myself tapping madly at the "F" button as I went back through town in front of all these dolls, hoping against hope that I could somehow interact with them and see those smiling faces again.

To be honest, while I played through the end of the game with a heavy heart (with the ethereal vocals of Japanese artist Asami singing melodiously in the background), it ended on a positive note, and it honestly made me want to visit the village myself if only to meet the dollmaker and thank her for her efforts.

At the end of the day, we all want to keep the memory of our loved ones alive in our hearts, but The Rural Village of Nagoro does all that and more. It teaches us the importance of appreciating what we have as well before they're gone - and reminds us to say "hi" to our neighbours and to offer strangers a friendly smile whenever we can.

The Rural Village of Nagoro is a short 15-minute narrative journey featuring lovely hand-drawn visuals and an emotional ending. It's free and doesn't have any ads whatsoever, so there's really no reason for you not to give it a go - you might just learn a thing or two about a particular place you should visit the next time you're in Japan.
Next Up :
Netflix Spiritfarer review - "Ferrying spirits with fun and charm"