We've tried ten of 'em, as well as checking out the overall service 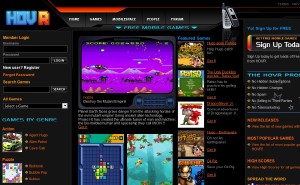 We covered the launch of Hovr yesterday – it's an advertising-supported mobile games service where the games are free, and funded by ads that you see during dead time before, during and after the games.

Hovr says it has more than 100 games available already, and thinks the ad-funded games will persuade more people to download mobile games, especially if they've been put off by the price of buying games in the past.

We've spent a bit of time in the last day playing with the service, exploring the Hovr website, downloading games, and trying them to see how they compare to the games you can buy on your operator's portal.

So how does it shape up?

The portal is very slick. You sign up with a username and password, and can then get straight into exploring what games are available. There are different ways to search too – by genre (action, puzzle, casino/card, and sport), or by browsing featured titles, the Top Five Games, and the Most Popular Games.

We think the difference between the last two categories is that Top Five relates to the user ratings (a five-star system like Amazon), while Most Popular presumably means 'most downloaded'. There's also a drop-down menu enabling you to scroll through the entire list of available games.

Actually getting the games is a marvellously flexible process, too. Click on the 'Get It!' link on a game's page, and you can choose three methods of getting it onto your phone. Enter your mobile number to get sent a text-message with a link; go to Hovr's WAP site using your phone's browser; or just download the game file and transfer it to your phone via Bluetooth or cable. (If you pay data charges, the latter option is extremely welcome.)

There's also a neat feature to recommend a game to a friend via email. 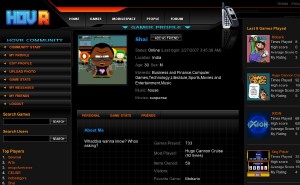 Before getting onto the games, it's worth saying Hovr's social networking features are impressive too. You have a profile page which lets you enter MySpace-style info on yourself, but also keeps track of your game stats – what you've downloaded, how often you've played, your best scores and so on. You can sign up friends too, in an effort to prove how connected you are.

The service is good, then. Do the games match up? Weeeeell...

We downloaded ten games, and gave them all a quick play to get first impressions. Loading each game works the same way – the first time, you're prompted for your Hovr username and password, but it remembers thereafter.

There don't seem to be any actual adverts at the moment, apart from for other Hovr games – but you can see the screens where they would appear, and they're not intrusive. Hovr says it'll be announcing the first block of advertisers soon.

So, let's run through the games we tried (on a Nokia N70), which were taken from the Top 5, Most Popular and Featured Games categories, as well as a quick browse by genre.

Kiloo's Jodie Marsh Photo Shoot is a simple action game that has you blasting rolls of film in front of a changing background of photos of Jodie in varying degrees of undress. It's quite fun, but the novelty quickly wears off when the photos start repeating. Strangely, my high score of 33,294 (*applause*) hasn't yet been updated on my Hovr profile.

Ixion, which appears to have been developed by Hovr itself, is much more fun. It's a horizontally-scrolling shoot-'em-up, complete with power-ups that give your ship missiles, lasers and a little drone that buzzes around you helping out. It feels pretty retro, but is well done, and perfect for a few minutes blasting on the bus.

AquaJava's Mobario is gob-smacking. Not, sadly, for its quality, but for its blatant lifting from Nintendo's Super Mario games. They haven't bothered to change Mario, the level designs, the coins, mushrooms or turtles. The game itself is perfectly playable, but you can't help thinking as soon as Nintendo gets wind that someone's making money out of this, Hovr will have to take Mobario off its service. Get it while you can, we guess.

Underground Racer, by Ozura, is a fairly-standard urban racer, which lets you earn dosh to tune your car. Apparently 'the need for speed is a must', which tells you all you need to know about the game's inspiration. It's okay, but the sprite used for your car only appears to have three animation frames – straight ahead, turning left and turning right – which looks ridiculous. It's like the mobile racers you'd play three years ago.

Hugo – Evil Mirror Part III is another Kiloo game, one of the firm's many titles based on the popular cartoon character. It's one of the more polished Hovr games we played, being a platformer that has you turning enemies into blocks of ice, then pushing them off ledges. It's a bit baffling at first, but rewards perseverence, and has bold colourful graphics.

BubblePop is another game by Ozura, but this time sees you matching up coloured balls, which rise in lines of three from the bottom to the top of the screen. It's a bit like an anti-gravity Tetris, crossed with the sort of ball-matching dynamics found in lots of RealArcade mobile games. The presentation is basic, to say the least, but it's pretty addictive.

Kiloo's FC Nerds is dreadful. It's three football-based minigames that start with a decent premise – a team made up of dumpy geeks takes on the world – but the game itself is rubbish. Penalties is frustrating, Handling sees you juggling a football while a Mr T lookalike flings bottles at you, while Tackling sees you lurching horizontally trying to tackle Amazonian women. It's worse than Infospace's Sexy Soccer, which is saying something.

Ozura's Kung Fu Fighters is also a bit pish, being an unimpressive take-off of Street Fighter II, except with more basic moves making it an unengaging button masher.

Meanwhile, PowerBabe – Flirt Club (another Kiloo title) is a quirky dating sim where you play a man-eating gal who has to pull in a bar, without annoying your mates by ignoring them. It's no New York Nights, but figuring out how to chat up men is a challenge, not least when they come out with lines like, "I totally dig girls who do fun and crazy things like ass smacking!". An eye-opener, but worth downloading. Possibly more so if you're actually a girl...

Finally, Bloktonik, from Robotube is a deceptively simple puzzle game that sees coloured blocks falling onto the screen from four sides, with you matching up clumps of four or five to make them disappear. It's not that visually complex, but the core twist is original enough to keep you playing.

Bloktonik and Ixion are the best examples of what we were hoping for from Hovr – the chance to discover new, fun games that wouldn't have made it onto an operator portal.

However, from this admittedly random sample, it has to be said that many of the games on Hovr are either average, extremely derivative, or both.

You could argue that ad-funded games should be as good as the ones you can buy, just as on TV, programmes on ITV (funded by ads) should be as high-quality as those on the BBC (funded by the licence fee). But many of the current games on Hovr fall short of that comparison, and far short of the best mobile games.

Then again, this is fixable as Hovr hopefully signs up more developers and publishers, while the ability for users to rate games on the service should ensure the cream rises. We'll be following the progress of Hovr (and rivals like GameJump) over the coming months, to see how the game quality improves, which other publishers sign up, and who advertises.