iPhone
| Hot Mess
Updated on November 7th, at 14:09: Those trousers won't be necessary, after all. Apple has, mysteriously, let Hot Mess onto the App Store in its current state.

The change of heart even caught designer Nick Ralabate unawares, who told me: "Wh-wh-wh-what???"

In the game, you play as a malfunctioning firefighting robot who unfortunately mistakes the fires of passion for real blazes that he needs to extinguish. So, you go around spraying suds on naked people.

That did not go down well with Apple. At all.

The Big A rejected the game citing App Store rule 16.1, i.e. apps must not feature "highly objectional" or "crude" content. Apple's official line on this kind of material is: "If you want to describe sex, write a book or a song."

But that didn't work, and the game was rejected a second time. In a tweet, Secret Library passed along this note from Apple: "We noticed your app displays a barely dressed couple kissing." 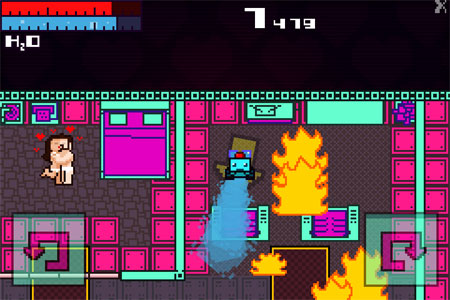 Like a game of reverse strip poker, Secret Library plans to keep adding garments to its pixel-art characters until its game gets through the submission process.

"Our plan is to slowly and awkwardly clothe our 8-bit lovers in some bizarre digital re-enactment of the 'walk of shame'," Ralabate says.