How we learned to stop worrying and love iPhone virtual items

Apple's introduction of in-app payments for iPhone apps earlier this year - and its recent tweak of the rules to allow free apps to make use of them - has got games firms excited.

They're walking in a freemium wonderland, hoping to make their fortunes from virtual items and downloadable content as millions of users snap up their free titles and get bitten by the micropayments bug.

The only trouble? A lot of gamers don't trust in-app payments. They mutter phrases like, 'it's just an excuse for nickel'n'diming', and, 'it shoulda been in the original game', and even, 'virtual items are rubbish, why would I pay real cash for a tiny virtual hat for a game character who in all probability I'll have forgotten in a couple of months?'

Things like that. I confess to having a few of these thoughts myself. There was no denying the success of micro-transactions in popular Facebook games and virtual worlds. But me? Pay for content in a game? Nah...

HomeRun Battle 3D was the game that toppled those preconceptions. I picked up Com2uS's excellent casual baseball slugfest, played it for a while, and loved it. The only problem was, it didn't love me back.

I swung and swung, with a succession of strikes my only reward. When I did manage to connect bat with ball, it either squirted sideways for a foul, or dipped gently into midfield as if I'd played a forward defensive stroke.

Maybe that was the problem: I was a Brit, and this just wasn't cricket. The only way we ever learned to play baseball in the real world was by utterly neutering it and calling it 'rounders.'

It was all a bit dispiriting. Not least because the key to success seemed to be earning bigger and better equipment by winning golden balls by hitting lots of home runs. The only upgrade I could afford was a dodgy leopardskin top. It wasn't looking good: 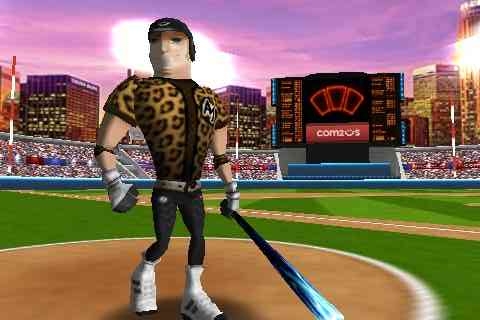 Then I discovered the in-app payments.

The game lets you catch up on yourself by buying equipment and outfits with real-world money. £1.19 later, and my player was dancing around in a Dark Ninja outfit, with newly-engorged Power and Contact attributes. He looked spiffing. I felt spiffing. And I started hitting home runs by the dozen.

I even went online and beat some American and Japanese players, who'd all presumably forgotten more baseball lore than I'd ever known. The golden balls started racking up, too, allowing me to upgrade my bat, and add a knight's visor to my outfit. Admittedly, the result was now more gimp than ninja: 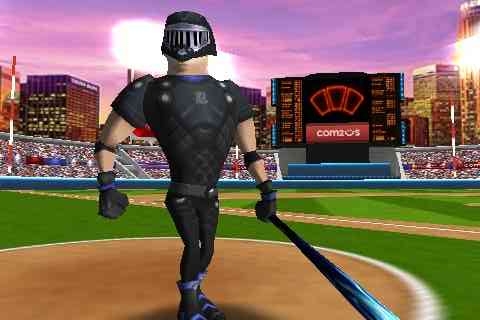 The point is, I started having fun again, and the nagging thought at the back of my mind that this success was bought, not earned, was surprisingly easy to suppress. Well, it was once I was the 161st best UK player in the Classic mode rankings, anyway.

It's not that the game was too hard to begin with - there are doubtless thousands of players happily racking up the balls with no need for a helping hand from their credit cards. They'll probably still hand my limey arse to me on a plate in the online mode, too - there's no unfair advantage here.

But for me, that £1.19 investment unlocked my enjoyment of the game. Who'd have thought a virtual gimp ninja suit could dispel my wariness of in-app payments at a stroke? Rubber hats off to Com2uS for showing how in-app payments aren't about ripping players off.

Now, excuse me, I've got 160 fellow Brits to overhaul. Maybe that £11.99 DeMarini CF4 outfit is worth the investment after all...