With an asynchronous multiplayer option

Hexicon is an upcoming word battling game where players will use their vocabulary to fight for control of a board. It's currently available in Early Access for both iOS and Android. Hexicon combines word searching with a bit of territory control to create a competitive word-centric game.

The game is played on a hexagonal grid that's full of mini-hexagons that each has a letter on them. Players will take it in turns to find words in this grid so that they can claim those tiles as their own territory. To do this you simply tap on the tile with the starting letter and then drag the cursor across the rest of the letters until you reach the end of that word. 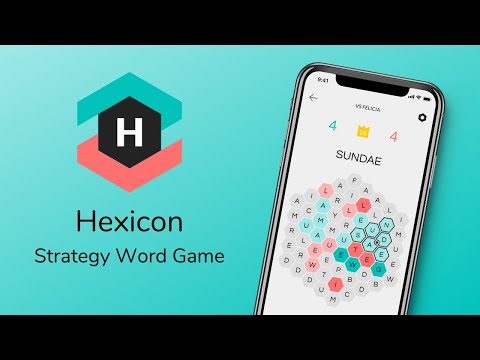 The aim of the game is to capture the tiles in the centre of the titular hexicon. This is a shape made up of six hexagons surrounding one of them. The player that has the most of their colour around this shape will be able to claim the middle tile permanently and that player will gain a point. The letters surrounding that tile are then returned to a neutral colour and the first to 16 points will win.

There are also various other strategies to consider such as swapping adjacent tiles so that you can create new words. Additionally, when a hexicon shape of permanently captured tiles has been created those tiles revert back to a neutral colour, though both players keep the points they've earned.

It certainly seems very interesting, particularly if you're into word games. Best of all, it has asynchronous multiplayer so you don't have to sit around waiting for someone to finish their turn, you can get back to it when you have the time instead.

Hexicon is available now in Early Access on Google Play and through Apple's Testflight game. You'll be able to play the game for free as the game is entirely supported by adverts.

Check out our news section to discover the latest, and greatest, games.
Next Up :
Heroes Arise is a new 5v5 MOBA that's now open for testing on Android