Zynga has added a new in-game event series for their magical match-3 game, Harry Potter: Puzzles & Spells. This will be the game’s first-ever Club Challenge. The event is already globally active and challenges player's clubs to enter the Forbidden Forest, a new interactive map that is filled with obstacles and enticing encounters but will provide amazing rewards for those who manage to complete it.

Considering that event is supposed to be challenging, you also need to prove your worth to gain access to it in the first place. The Club Challenge is only open to players after they reach level 55 and while it is a club challenge, the event does open up an entirely new and interactive path that can be completed solo by providing independent points, rewards and a “lives” system in each event. 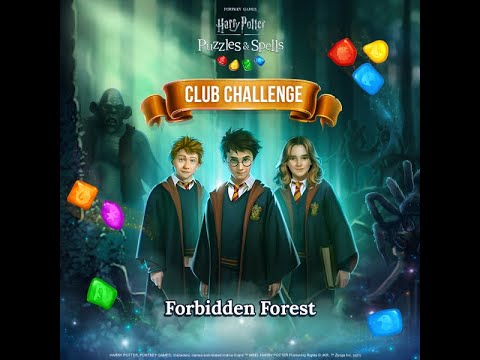 Yaron Levyand, Executive Vice President, Games at Zynga said, “The Club Challenge event introduces a blend of excitement, mystery and friendship that is core to the Harry Potter series and allows players to connect and collaborate with Clubmates in more meaningful ways.”

These Club Challenges last for a period of three weeks before being replaced by a new one, and each new challenge will bring with it a new map filled with puzzles and quests to continue the player's journeys.

The lives system I spoke of above is basically a feature where you get three lives for a specific Club Challenge, and these can be earned by earning points for completing puzzles.

As for the more cooperative features, since these are Club events, members of the same club can collaborate to traverse through the map, working together and completing puzzles to further their league rankings.

For the first Club Challenge, players will leave the comfort of Hogwarts and enter the uncharted and mythical Forbidden Forest, unearthing rare artefacts like the coveted House Cup or the Sword of Gryffindor. These will grant you access to the final puzzle, where you’ll have to defeat the most horrifying monsters in the forest. They are the Mountain Troll, the Hungarian Horntail and Ron’s most despicable foe, Aragog.

Enjoy match-3s? Check out some of the best match-3 games for mobiles right now!
Next Up :
Apple Arcade weekly update: Fantasian, Zen Pinball Party, Zookeeper World and much more