Technology is always advancing and while we may not always be able to predict what the next big technological advancement, or refinement, is, there is always a rather simple pattern. The new technology appears at a premium, accessible to the wealthiest or the military; it becomes more accessible and third parties adapt, bundle, or attempt to replicate it; then somebody comes along and makes it all smaller.

However, we've never previously had crowdfunding to the scale that we've had it now, and it's allowed creators like ONE-NETBOOK to get to the finish line without going in front of a board of investors. Instead, they took it to the public, who lapped it up. The ONEXPLAYER was funded in about 15minutes when it reached Indiegogo earlier in the year, with the campaign closing out at just under £1.5m. 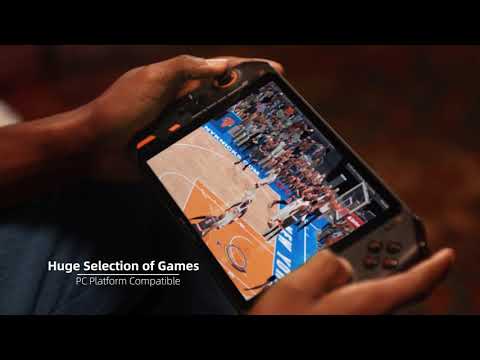 A PC in your hands

We've received a prototype version of the device, specifically the 11th Gen Intel Core i7-1165G7 variant, which comes with 16G of RAM. For those who don't live inside the somewhat confusing world of PC components, the 11th Gen is the current generation, the 7 is the third-highest, of four, sub-brands, and the G at the end means that it includes a discrete graphics solution. That G is frequently swapped out for H, HK, HQ, U, Y or other variants when it comes to mobile - but this is not a chip designed with mobile in mind.

That does show, of course. While portable, the ONEXPLAYER is 11" wide at its widest point, just over 5" tall, and roughly four centimetres deep on the shoulders. Compare that to 9.5", 4" and 3cm on the Nintendo Switch - the device this will most certainly be held up against - and it's quite a hefty beast.

The ONEXPLAYER as a console

All of that said, the ONEXPLAYER is marketed as a console, rather than anything else, and that makes a lot of sense. It answers a call that is being asked increasingly by those who game on their regarding controls by coming complete with its own controller, literally built around the 8.4" screen.

Despite its visual appearance being closer to Nintendo's offerings, the controller layout is closest to the Xbox Wireless Controller, with the face buttons, joined d-pad and shoulders being closer to that than other contemporaries. Notably, where the Xbox has the right analogue stick and d-pad tucked in, more central to the controller, the ONEXPLAYER's inputs are close to parallel to those above them on the face.

Perhaps most notable for me though is that the entire monitor is a touchscreen. This is great. Touchscreens are brilliant, and this means that I can play grand strategy games and real-time strategy games with immediate input. There's something more dynamic feeling about a touchscreen input than a mouse & keyboard input when it comes to those games; especially the kind I really like, the ones stacked with menus and filters. Of course, being that the device comes equipped with USB ports, there's no reason why you can't plug extra peripherals in.

It's also equipped with a kickstand, so you can sit further back from it when watching movies, or if using a Bluetooth controller to play. It's also useful if you opt-in for the extra keyboard for the device, which mounts onto the bottom of the unit and can fold up over the screen to cover it for when it's not in use.

That's not all though, at times it feels like the One-Netbook team have crossed the line between efficiently addressing concerns and feature-stuffing. It comes complete with a fingerprint scanner, a micro-SD port and a whole array of shortcuts tied to extra buttons around the fascia.

These include a turbo button, which pushes the device to perform a bit better. When running games like The Witcher 3, Forza Horizon or Grid (2019) this is clearly felt, although you do start seeing the battery drain down a bit quicker as a result.

Cleverly, though, there's also a keyboard button. This will instantly pull up the Windows on-screen keyboard and also put it away. However, something I didn't know (as I didn't run through full set-up, and the prototype version we received didn't have instructions) was that you could hold the button to switch the left analogue stick into a mouse replacement. That's incredibly clever and incredibly welcome.

But then, there's also rumble.

As somebody who mostly plays games on mobile and PC, I was caught off-guard by the old-fashioned rumble that's built into the ONEXPLAYER. It was reminiscent of the early Xbox rumble, not quite as crude as with the Nintendo 64 or Playstation 2, but definitely a little bit jarring and... frankly... a bit louder than needed. Combine that with the fans, which do a great job of keeping the console cool, but can get quite loud, and you'll find yourself leaning toward using earphones while gaming.

As a gaming machine

While you could, due to the Windows 10 OS and USB inputs, quite easily use this device to sit there and do exciting things like tax returns or reading about celebrity mishaps, it is arguably created with gaming in mind. It performed admirably.

I ran, natively on the device, The Witcher 3, GTA5, GRID (2019) and Rainbow Six Siege with little-to-no problems on average settings. Ramp it up and there was some slowdown, however, when you're dealing with an 8.4, 2.5k resolution screen that you're holding at arm's length, there's - in my opinion - very little need to push settings up to maximum. Maybe that's my background in indie and mobile games speaking, though.

There's something to be said about devices where the screen is held directly in your hands, especially so when the controls are right there with it. It's almost hypnotic and feels much more absorbing than cramming a controller into a PC.

The ONEXPLAYER gave me an opportunity to boot up a few old favourites, and dive back into my Steam library for a few hours. I played games like Switch Cars, Spelunky 2, Rogue Legacy and Dead Cells, each require quick reactions and responsive inputs. The device really delivered here. I vastly preferred playing Dead Cells here rather than its Nintendo Switch counterpart, where I really struggled with the inputs.

A future of portable PC gaming?

It's been a great experience playing around with the ONEXPLAYER, and for somebody who has thousands of games in their Steam library I'm excited at the potential of playing through them on the go with something less unwieldy, and space-consuming than a controller plugged into my laptop. However, it feels like the device hasn't fully reached its potential in the spaces that it's exploring.

It's a powerful console, and definitely the most powerful handheld console out there, but it could lean into a few more learnings that we've seen in the mobile space, notably, if there was an option to put a Sim Card into it so that you could get a 5G connection, then it would really complete the hybrid nature of the device.

With the Windows 10 OS comes a stack of pros and cons. When I received the prototype it had been used elsewhere, it was full of relics of the previous user, install directories, uninstalled drivers, and a lot of relic software. New owners wouldn't experience this as their first impression, but it did make it incredibly obvious that despite its outward appearance, Windows 10 is still an OS that is trying to cater to too many audiences at once which means that there are lots of cracks where things can go wrong.

A bespoke OS isn't the solution here, but a tight, custom-set-up and an optional resource/cleaner software (like Huawei's early Honor management suite) could keep the Aging/Updating OS Management closer to the simple, almost background update loops of most consoles and phones.

The elephant in the room though is the price point. If you don't dabble in computer construction - and we're in an age there where few need to - then dropping £1000 on a device that's as powerful, compact and utilitarian as this isn't actually outlandish, if you have the finances. I know people who have spent more on gaming laptops with lower specs, If you do find yourself with that kind of money laying around and you're looking for a high spec gaming PC dressed as a handheld console, with solid features and a lot of modern functionality then you don't need to look any further.

Find out more about the next wave of ONEXPLAYER consoles on the official Indiegogo page.

Great, informed design and clever composition made a powerful PC into a formidable handheld console. There's still some refinement needed to make this accessible to existing console audiences, but existing tech-fans and those who have played games for a long time will find this a delight, assuming they can get past the price point.
Next Up :
Bound By Blades review: "Animal kids against evil!"