GUNS UP! Mobile is a strategic PvP online game published by NHN Corp. The game is all about building your army, raiding anonymous bases, and building your bases strategically so that it can defend itself from the attackers. Since it's a multiplayer game, you can play with your friends, form alliances, and many other things. The game seems very interesting, and there are many reasons why you should download it. GUNS UP! Mobile is available on both Android and iOS.

Since it's a strategic online game, there are many things we have to look after. Firstly when you open the game, it begins with a tutorial about how to attack, defend, use the resources, and build the required buildings. If you have pre-registered from the official site, Google Play, or pre-ordered from the App Store, you will also get pre-registration rewards. The pre-registration/pre-ordered rewards are Sergent (a rare unit member), full ammo, full gold, and bags of gems. The game has many other components such as tasks, challenges, events and collecting different kinds of rewards.

The game starts with a tutorial on how to attack or 'Raid' other players' bases. This helps a lot as it teaches you a lot about the secret tricks and how to strategically deploy your units for better results. There are different 'Unit' who mainly fight, and some 'Commander Abilities' which deal great damage to your opponents. Every time you deploy units, it consumes a certain amount of energy but this refills with time and there's a limit to how many units you can deploy too. These limitations present themselves as a challenge as the game levels up. So, you need to focus on the ratio of units you deploy and which Commander Abilities you need.

The outpost area, the main line of defense, is another part of the game. It sees you building bunkers, tents, sandbags, walls so that they can defend against enemy' attacks on your base. How you build your defense base is very important as when you are away, other unknown online players might attack your base. You can also upgrade these to make your defense much stronger. You can also play 'Defend,' where you have to protect your base from enemies. It helps you to improve the quality of your defense.

The headquarters, which can be considered the powerhouse of the game, is an important part that requires a lot of attention. To keep up with the game, you have to constantly upgrade your buildings, units, capacity and so forth with gold, ammo, fuel, and other things. Since you get only one builder, it's important to plan and prioritize what should be upgraded first. To upgrade the headquarters, the game demands you upgrade your buildings and defense to a certain level, which is a very good thing to prevent rushing the bases. The resources replenish again. The gems earned by completing events, challenges, and achievements can be used to purchase crates, buy new units, and many more things. 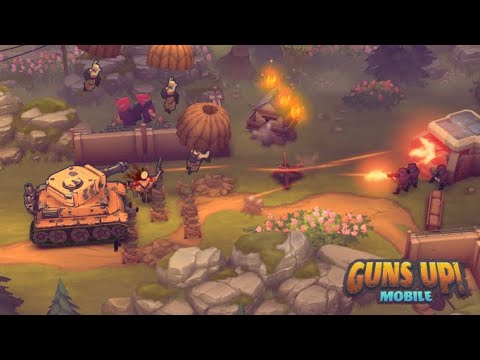 GUNS UP! Mobile also has many tasks, events, and challenges that can be unlocked at certain levels. Raiding other players' bases is the fastest way to earn ammo, gold, and other rewards. After raiding, you mostly get crates that contain rewards. These crates need to be activated, and after some time (which depends on the type of crate you got), you can open them. Better crates mean Better rewards. Note: You can activate only one crate at a time.

Overall, the game is very simple, but it's not so simple the game becomes boring. The game's concept is very similar to 'Clash of Clans'. It's an online game, so you need a proper internet connection. This also means you can play with your friends and fight alongside them. If you have a problem with something, you can always use the game's guides for help. The game is generous with rewards and also gives you the option to purchase items from the 'Store.' Since it requires you to link with your Google ID or Apple ID or Twitter it helps you preserve the game. Hence you can play it on any other mobile. GUNS UP! Mobile is a strategic online game that is very addictive, fun, and exciting. It is highly recommended!

GUNS UP! Mobile is currently in soft-launch in India and the Philippines, with a global release scheduled for later this month. Interested players can pre-register for the title on Google Play or the App Store.

Next Up :
App Army Assemble: Opus: Echo of Starsong - "Does this narrative-driven adventure keep you gripped from start to finish?""

Guns Up!, the military strategy game, launches globally for iOS and Android

App Army Assemble: Opus: Echo of Starsong - "Does this narrative-driven adventure keep you gripped from start to finish?""