It looks like Rovio's game designers weren't the only ones with gravitational fields on the brain over the past year.

In an unfortunate case of conceptual coincidence, physics-based puzzler Get Cow? - from one-man indie startup Lifeboat Studios - bears more than a striking resemblance to a certain bird-related sequel that's doing the rounds at the moment.

In the teaser video below - which was uploaded before any Angry Birds Space footage surfaced in the wild, incidentally - the pilot of a rocket ship is shown launching projectiles at UFOs in an effort to prevent the kleptomaniac extraterrestrials from abducting earth cows.

Things start getting familiar when the rockets become caught in the gravity of nearby moons, with the mini-moons' orbital fields affecting rocket trajectories in a similar fashion to the planetary bodies influencing the birds' trajectories in Angry Birds Space.

Dave Miller, Relentless Software employee and Got Cow? mastermind, says that he's been working on the game for the past 18 months, completely unaware that Rovio was putting similar gravitational mechanics into its 10-million-selling interstellar hit.

Set to launch on iOS "soon", Got Cow? features 60 levels, Retina display-optimised visuals, and a price tag of 69p / 99c. 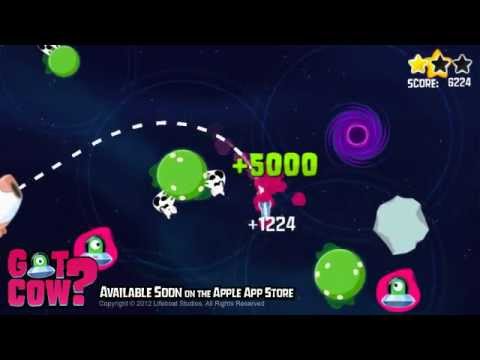