Indie developer Rose Tinted Games has officially revealed its first project, a cheeky satirical game called Genfanad: A Generic Fantasy Adventure. The entire premise of this title is to be a completely, well, generic and cliche high-fantasy adventure game that will offer up plenty of tongue-in-cheek humour for any old school RPG fans.

With one look at the previews for Genfanad, a certain other adventure fantasy simulator might come to mind right away; Runescape. The visuals take clear and intentional inspiration from the classic RPG, and in all honesty, the gameplay also sounds like it might be taking a good bit from Runescape as well.

Genfanad aims to be a life simulator in the high-fantasy era that will allow you to do whatever you wish to do within the setting, be it farming, dungeon-crawling, fishing, or anything else you can think of that would be included in that time period. You could even go through the entire game without fighting a single monster, and simply take up trade skills instead to make money and enjoy your own life. 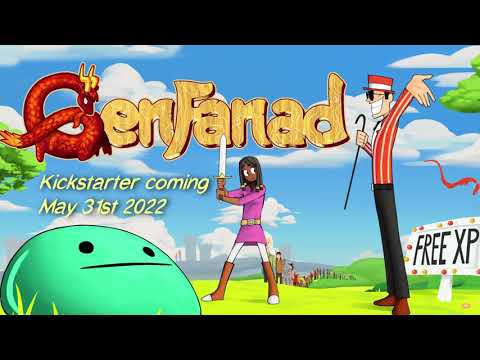 It almost feels dismissive to call Genfanad “generic”, despite the fact that it is literally in the title, as Genfanad is meant to stand for Generic Fantasy Adventure. But if you truly take a look at what it aspires to do with all of the content that you can tackle in whatever way you please, it has a lot more to offer than just satirical takes on modern and classic RPGs alike.

Keep in mind this is supposed to be a low-stakes title, not one to sink your life into like the previously mentioned Runescape. It is, however, also a multiplayer title that will allow you to go on these adventures, be them grand or dull, with friends as well.

If all of this sounds like something you’d enjoy, you can head over to Genfanad’s website, which is currently promoting their upcoming Kickstarter later this month. Mobile releases for both platforms are planned, as well as a Steam port too, which you can check out right now for screenshots and trailers.