By Catherine Ng Dellosa
| May 17

Solo developer 1f1n1ty and publisher RedTigerPro have announced the upcoming launch of gem setter on mobile, letting players engage in a little bit of brain training when it lands on Steam on May 19th (with a mobile release to follow). The minimalist game features elegantly designed stages where players can slide blocks to solve puzzles across 70 levels.

In gem setter, players can expect to move ice blocks by sliding around to adjust their shape. You can connect blocks and disconnect them from wall to wall, all while trying to avoid deadly traps and challenging obstacles along the way. You'll also have to find your way through quirky spaces and open pathways in unconventional places. 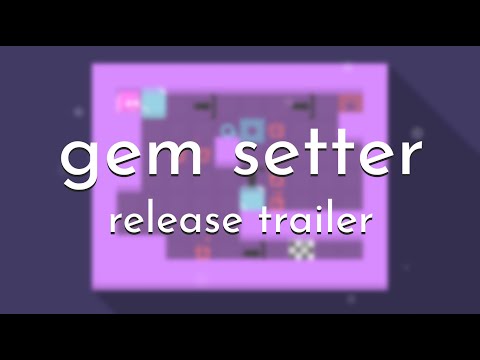 Developed by a student at UT Austin, the game boasts a lovely soundtrack that complements the chill vibe of the game. Players can also put their own creativity to the test with the game's level editor to see if they can pose a challenge to their family and friends. The level editor has a database that lets like-minded individuals upload their masterpieces and share levels with others as well.

If you're curious about the minimalist title, you can add the game to your wishlist on Steam at the moment. You can also visit the official website to know more about gem setter, or join the community of followers over on the official Twitter page to stay updated on all the latest developments. You can also have a look at the embedded trailer above to get a feel of the game's visuals, gameplay mechanics and totally funky soundtrack.

Are you on the hunt for more similar titles that will put your skills to the test on your mobile device? Why not take a gander at our list of the top 25 best puzzle games for Android phones and tablets?

Next Up :
Final Fantasy VII Ever Crisis is nearing launch as new information points to a late September launch