Gboard versus Apple Keyboard - Which is better?

Google recently released a reworked version of its stock Android keyboard on the App Store (only in the US though, mind). Dubbed Gboard, it includes a bunch of cool features that Apple Keyboard doesn't have.

Naturally, this gave iOS users pause for thought, and panic ensued as they switched between them while weighing up the pros and cons of each.

Or maybe that was just me.

Anyway, Pocket Gamer strives to make these difficult life choices a little easier. So we've spent time with both to bring you a definitive winner in the great battle between Gboard and Apple Keyboard.

Gboard - What does it do better?

Google is, first and foremost, a search engine. And an excellent one at that. So naturally a major draw of Gboard is in its Google Search integration. And it's executed to perfection.

Say you're chatting to your partner who suggests you eat at that new restaurant. You might not be sure where it is or want to reserve a table. Well, you can get all that information from within the keyboard with a quick Google Search. 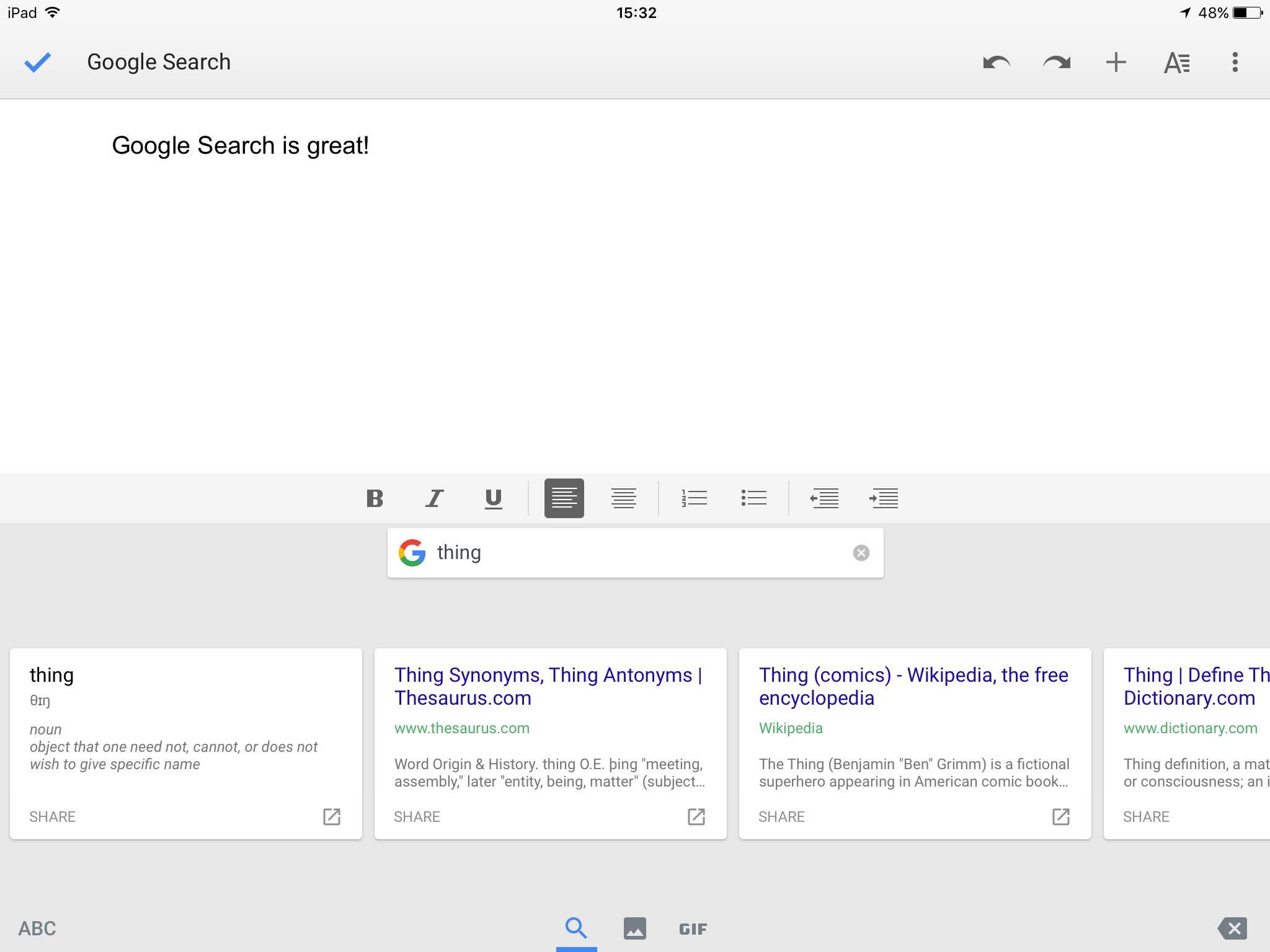 It'll create a tile with all of the necessary information on it, including handy buttons that let you pull the restaurant up on Google Maps or give them a call to reserve a table. The attention to details is rather impressive.

Sure, it's easy enough to drop out to Chrome or Safari and perform the same function, but in the age of smartphones we expect to get information as efficiently as possible. Gboard helps you do that.

This may come down to personal preference but it's a simple fact that 'Glide Typing' is faster than tapping out words.

This is another point in Gboard's favour, as the Glide Typing functionality (which is unavailable in Apple Keyboard) performs expertly.

It's nippy, accurate, and provides handy predictive text options - which includes emojis for crying out loud - to speed things up further. 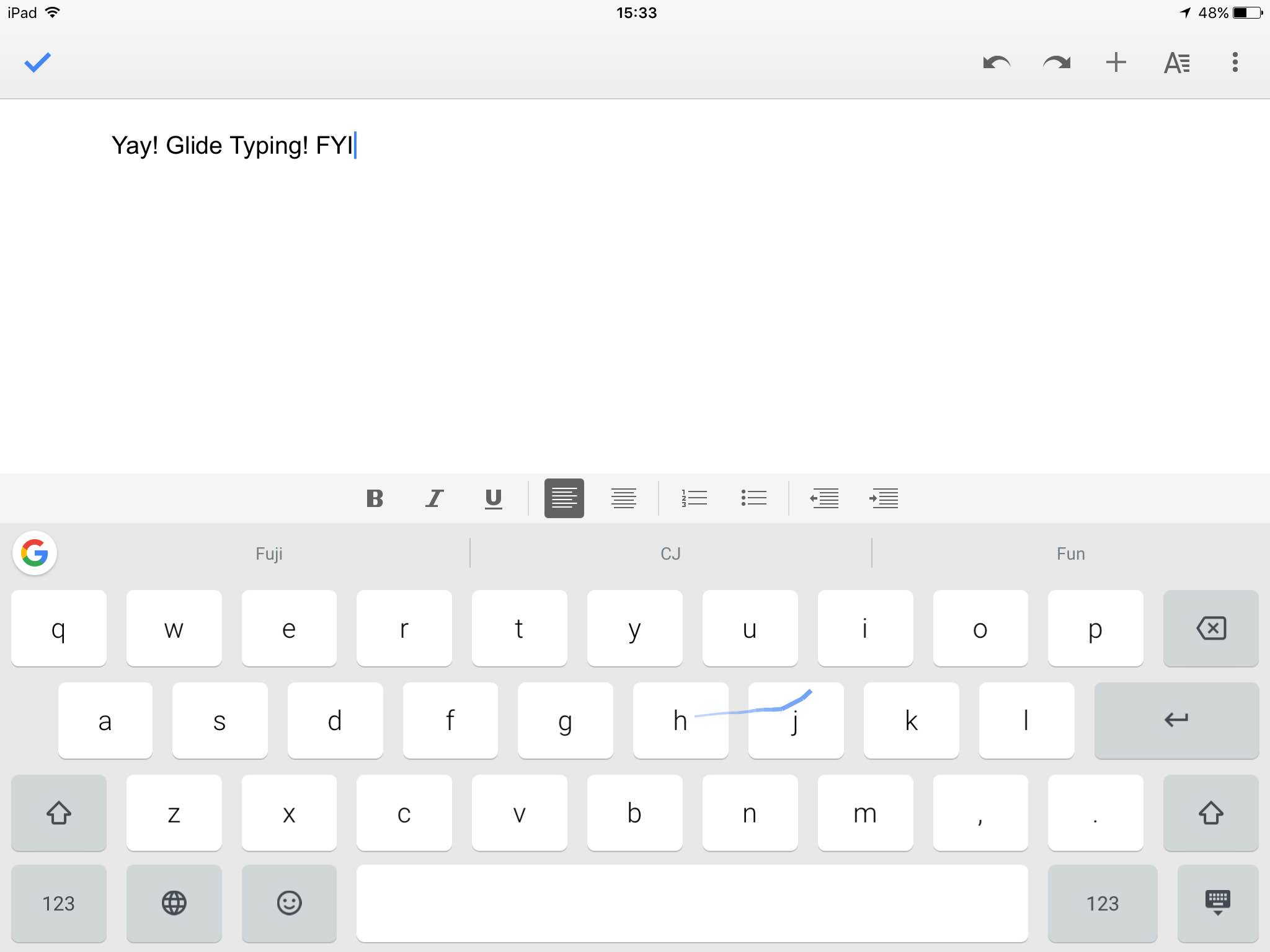 Much like Apple Keyboard, it also remembers words you regularly use. That means you can now glide type out that embarrassing nickname, or tap on it using predictive text to save time.

There are some of you who won't care about this in the slightest. But, in the age of efficiency, some of us rely on .gifs as a means of communication.

Yes, it's a sorry state of affairs but if you're "one of those" you'll love the easy access to .gifs, which are nestled snugly in the emoji section. 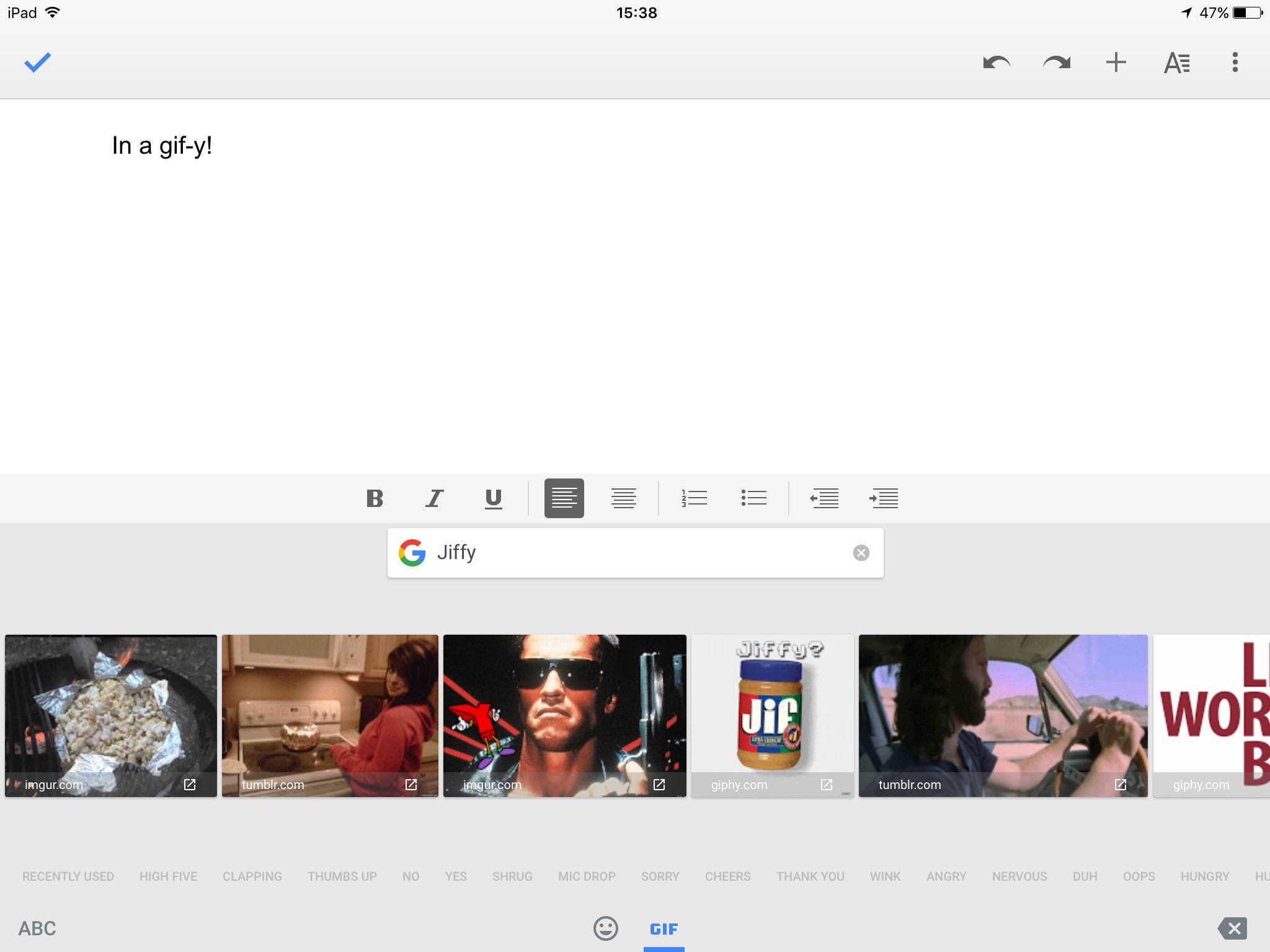 It pulls .gifs from a bunch of different sources, and the best ones usually rise to the top. This alone is a game-changer for .gif hunters, as finding the best one can be a little time-consuming.

Apple Keyboard - What does it do better?

Why do we buy Apple products? Well, because they're works of art, provide an unparalleled user experience, and have a nice shiny logo on the back. Pretty compelling reasons right there.

Apple's stock apps run buttery smooth (aside from the well-documented Game Center issues) - and the same applies to Apple Keyboard. You tap somewhere to type and it appears instantly. And there's no lag or slowdown whatsoever when typing. 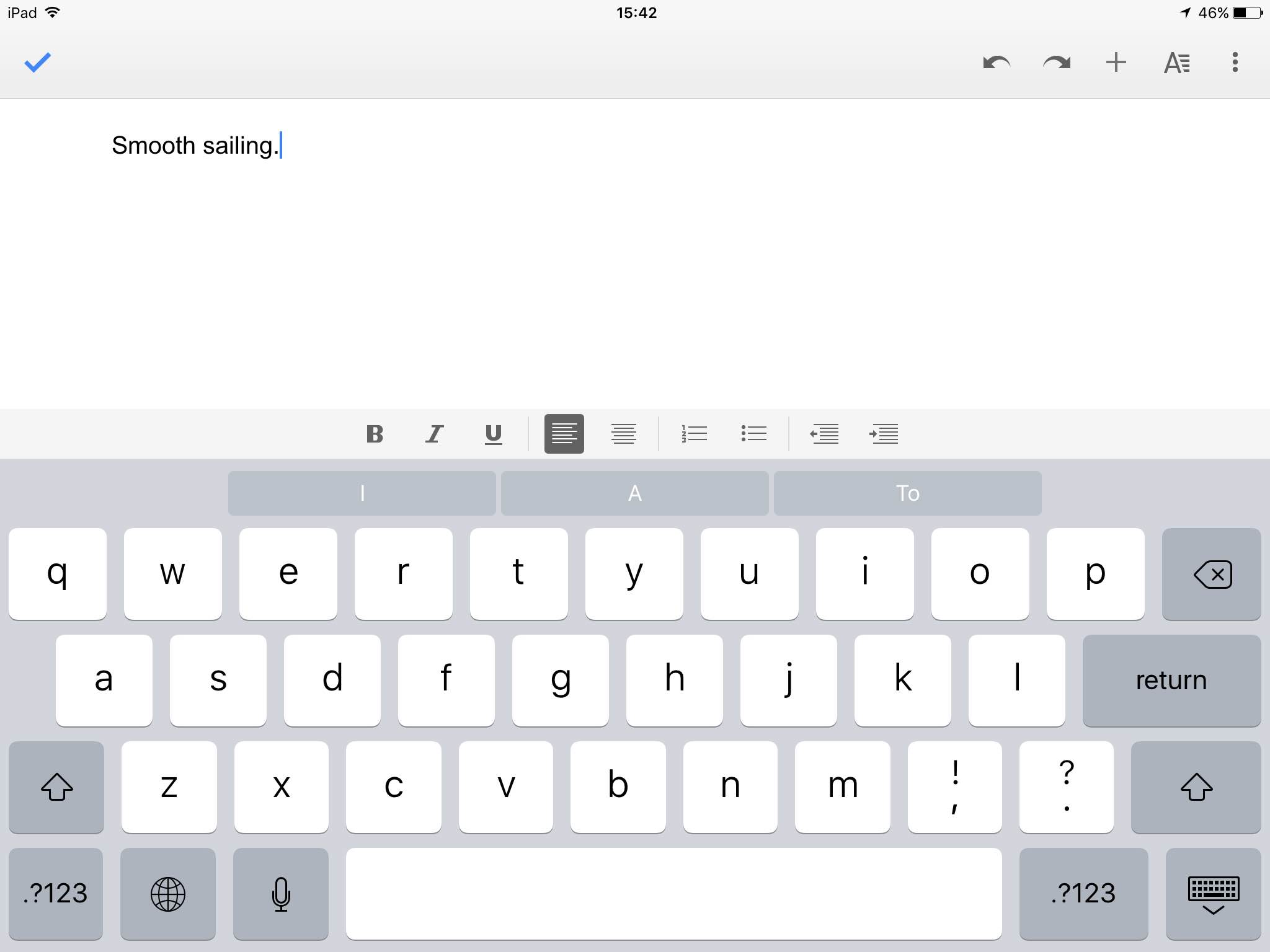 However, this isn't always the case with third party keyboards. I haven't experienced any lag issues when typing on Gboard, but it does take a second or so to appear sometimes when you tap to type.

This doesn't massively bother me, but those looking for absolute perfection - which is a reasonable request when using an Apple device - might be slightly put off.

If you rely heavily on your iPad for work, then Apple Keyboard is an absolute no-brainer.

It includes extra functionality not present in the iPhone version, and all of it is designed to improve your - you guessed it - efficiency.

For a start, if you press two fingers on the keyboard, it turns into a trackpad. This lets you highlight text with far greater ease than before, as doing so manually is fairly finickity. 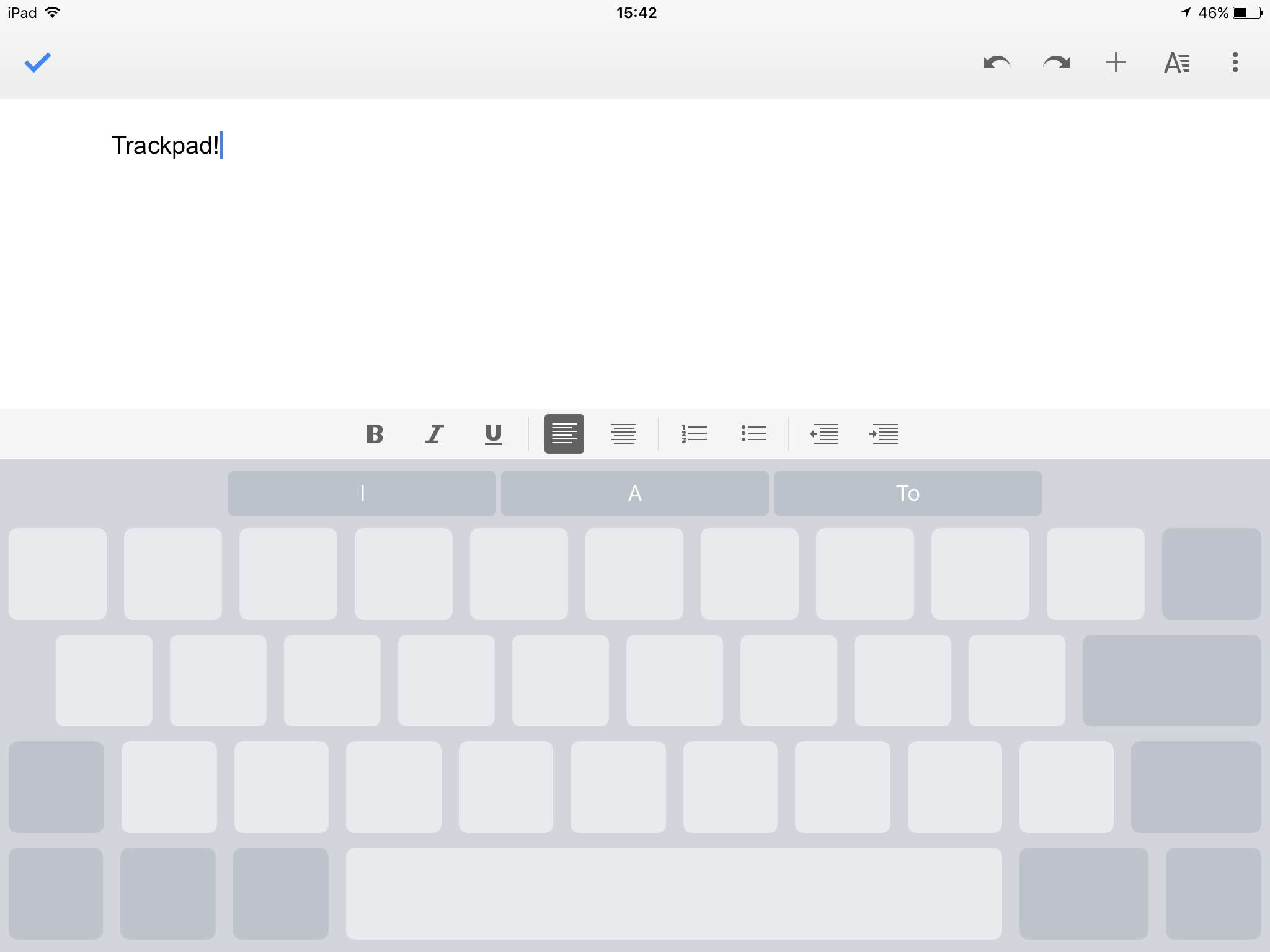 Aside from that, there are shortcut commands that let you perform actions like copying, pasting, undoing an action, and text formatting on the keyboard itself.

This is an incredibly handy function that will drastically increase your productivity.

Which is better then?

So, it seems like Gboard has this clinched, as it has three benefits over Apple Keyboard's two. However, this doesn't tell the entire story.

The reality is, the two keyboards are better equipped for different tasks. Yes, that does feel like a bit of a cop-out, but understanding this will help you get the most out of each of them.

I'd argue that Gboard is the better option for your iPhone, which you regularly use to send messages filled with emojis and gifs, get quick information about local restaurants, and type while on the move.

However, the extra functionality Apple Keyboard contains on the iPad - combined with the larger screen space resulting in a less-than-optimal Glide Typing experience - means that iOS's stock keyboard is the clear winner here.

The other features come down to personal preference. If you're heavily into your search and not overly bothered by functionality on your iPad, then you'll gravitate towards Gboard.

Care more about the smoothest user experience? Apple Keyboard it is then.

You can now get Android's Google Keyboard on your iPhone