Just because something is simple, that doesn't mean it's elegant. It sometimes feels like mobile developers forget that - there are so many games on the App Store that offer one-touch controls and nothing else. Galaxy Stack just about manages to stay on the right side of that line, but it's touch and go at some points.

It's a shooter that scores you on the pile of shattered spaceships that you've managed to create below you. That in itself is a pretty interesting idea, but the game doesn't quite do enough to build on it, if you'll forgive the pun.

You control a little ship across a strip of the screen. If you're moving left or right, then you're shooting. Lift your finger off the screen and time slows down before you push it down again. Enemies take a few hits to down, and then they plummet to the ground.

You can still die if one of the broken ships hit you, but the aim of the game is to land them in a neat, tidy, and as-tall-as-you-can-make-it pile. The higher the pile, the more points you'll earn when you eventually die.

And that's about all there is to it. You'll come up against big bosses from time to time, and when you've killed them you'll unlock a new ship with a different, better way of firing. Then you'll repeat the process again, building the tower and trying not to die. 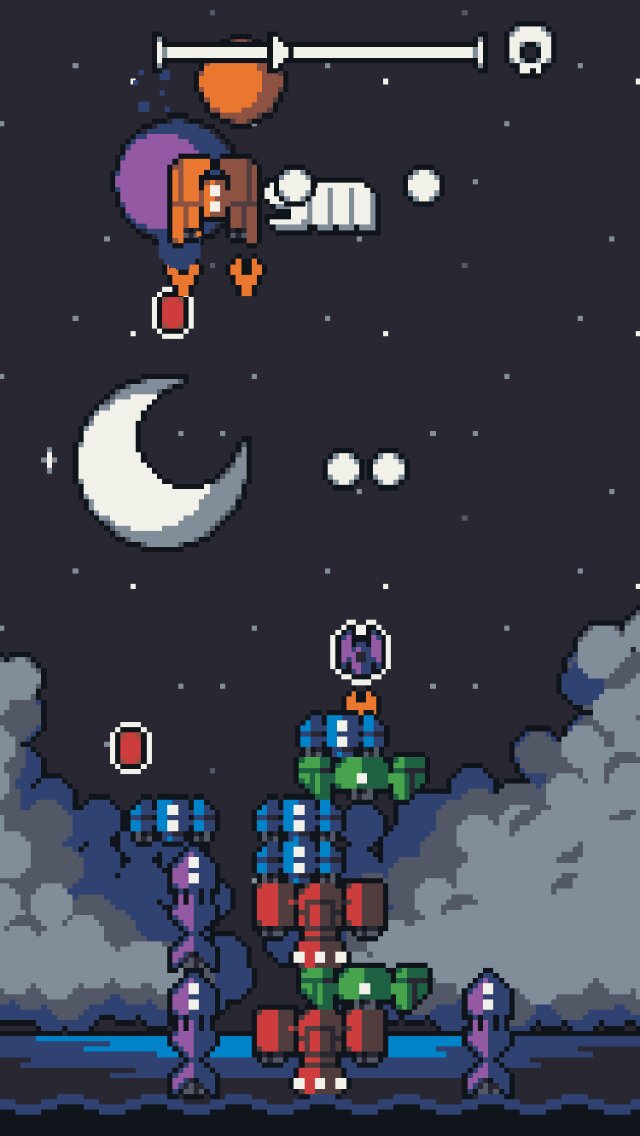 The pile doesn't get rickety - there's no physics engine here to force you to consider when and where to try and kill the bad guys. Sure there's some thinking, since your pile inevitably ends up pretty thin, but for the most part you'll be concentrating on the shooting.

And that's the game's main problem, because the shooting, while solid, just isn't that interesting. It's rare that a scoring system is more interesting than the action in a game, but unfortunately that's the case here.

There's fun to be had, but it never feels like the game hits its stride - you'll be enjoying yourself, but nothing grows out of that excitement, and when you realise that, you're going to put the game down pretty sharpish.

It's worth giving Galaxy Stack a go just to check out what it has to offer - in that respect it's a bit of a shame it's £1.99 / $1.99, if it was free it'd probably be easier to recommend. Right now though there just isn't enough here to really sink your teeth into.

You'll play it for a bit, make a satisfied 'ooh' sort of sound, play for a bit more and realise that that first 'ooh' is probably going to be the last one you make while your fingers are engaged with Galaxy Stack.

Galaxy Stack has a nice idea, but it doesn't back it up with enough fun
Next Up :
DC Worlds Collide review - "DC fan service in an enjoyable gacha package"