Fur Squadron is a new on-rails shooter that certainly takes a few cues from past games. Our reviewer, Will, enjoyed his time with the game, but we're always happy to throw a few more opinions into the ring. So, we put our App Army in charge of the titular Fur Squadron to see what they thought.

This game is literally Star fox. It Plays well, controls well, graphics are nice though I’m not a fan of the neon art style. Seems like it went with a polygonal look like the original, but with a twist, and it doesn’t entirely work. As much as it plays like star fox, I couldn’t find a way to do flips and stuff. At least there is a barrel roll button!

Oddly, the app has an exit game option on the main screen. Not something you usually see in a mobile game. When I clicked it, the game crashed and I had to force quit. I’m guessing this was a steam game and they didn’t remove it? Overall it’s a fun game, though it’s nothing amazing.

It has arcade vector-style graphics and characters similar to Starwing (or Star Fox in the USA). The game plays and feels like Star Wing, only in vector style. The levels were very challenging and the game seems to be of a shorter duration The aiming system needs a lot of reworking as it does not lock onto the enemies that I want to shoot at. And the controls as well, they could be very frustrating and they need a lot of work. However, for a small price, this game is worth it. But for it to live up to its potential, controls and aiming must be fixed, as well as a more improved storyline.

Fur Squadron is basically an on-rails shooter in the style of Starfox but done in vectors. It looks very cool (vector games always look cool) and I had no problem with the touch controls although aiming can be problematic at times. The problem is the bugs. Every time I died in the game, it would crash back to the Home Screen when I tried to start another game. This behaviour also occurred when playing the game on my iPad. Rebooting both devices did not solve the problem. This quickly became frustrating and killed my interest in playing further. A shame really and I hope it gets fixed in a future update so the game is not so frustrating to play.

Clearly heavily influenced by Star Fox for character design and levels mixed with a Star Wars arcade vector style. Controls were fine for me and can be tweaked and the difficulty spikes around level 5. I'm not sure of the longevity as there only seem to be six levels but there may be more unlocked as progression hints at glitches and the main home screen is effectively empty. I'm not sure if there are plans to add more but what there it controls smoothly and is fun.

I confess I never played Star Fox 64, to which FUR squadron is a clear homage, though I know it by reputation. I am also not a big fan of on-the-rails combat or racing games. I had fun playing Fur squadron despite my disposition. There are times the game really works, there are set pieces where you are forced to change your tactics, and I realised I have neglected my barrel roll (evasion dash) for most of the game since zipping around and leaning on the blaster controls worked well enough in a gleeful whack-a-mole style bullet frenzy. Then on the final level, a sequence where I can not shoot and only barrel roll reminded me it was there.

The whole game is essentially six training levels that begin really easy, by level three I was wondering if a campaign would emerge once I was done with the training scenarios because I breezed through them in minutes. The final training level gets really difficult, it is also long, and there are no checkpoints. I spent as much time on three attempts of it as I did playing all the levels leading up to it. 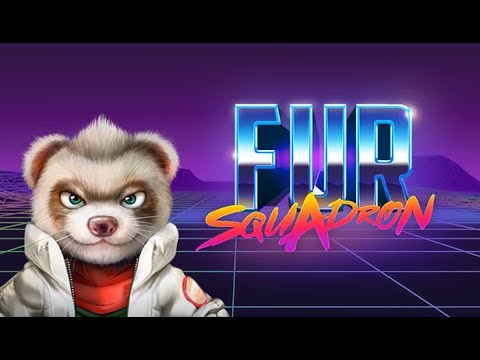 It’s a technique for creating a challenge that has aged poorly since Dangerous Dave, even as I got really good at the first two sections of the final boss fight. There is also a boss fight where the screen flips upside down and some of your controls become inverted so that even if you flip your phone over, you still end up spazzing out and dodging the wrong way.

It makes the game more difficult, but not in the way that I like my games to be difficult: intelligent enemy design that forces you to learn patterns and use your abilities in creative ways. It feels a little bit underdeveloped in that category, I would recommend it to those who feel Nostalgic for a slice of Star-Fox-Like action and patience for retro game mechanics.

Wow, what a wonderful game, it's a lot like the Nintendo 64 Star Fox 64 game. I thought the graphics, sound and controls were magnificent. Super fun game, I suggest adding an option to configure the controls to suit personal preferences so it can help even more in your gameplay part. I thought this version was amazing!

I started out this game with the touch controls and I found the levels were more on the challenging side of things. The thing that made it difficult was the touch controls, it was harder to guide your shots at the enemy (especially during the boss fight). After it took 4 times to defeat a boss it gave me an in-game tip that I could use a guided shot by holding down the shoot button (face palm - where was that during the "tutorial mission") The graphics look good, the sound fx and music are just alright but they do need to make the touch screen controls better, using a controller helps though. Being that this is Raptor Claws' first game, I think they did a pretty good job.

This is definitely a good-looking on-rails arcade shooter… the arcade vibes are very strong and the obvious call-back to Star Fox is nice. The sound and especially the music were very good but I found them distracting so turned the sound off. Controls were not that easy… for one thing, I found the sensitivity way too high and had to turn it all the way down in order to stand a chance. That made a difference, making it easier for me to target enemies. And I found the spin button so close to the fire button that I often found myself spinning when I meant to fire.

Fortunately, the game has controller support so that problem was easily dealt with. If you’re on a touchscreen you might have trouble with that. I did experience more crashes than I should have, and I was ready to stop trying but kept at it. Hopefully, an update will solve that problem.

The campaign screen only shows 6 levels that I haven’t made it through yet, but there are three characters and three levels of difficulty that you can unlock. So it looks like there’s a decent amount of play for your 3.99. Worth giving a chance if you enjoy these. I do. Overall the game is a very good-looking, challenging on-rails arcade shooter, but can stand out with a bit of improvement. Thumbs up.