Also: Nintendo never threatened him with a lawsuit

Flappy Bird creator Dong Nguyen has revealed new details about his next game.

Dong Nguyen gave a talk today at the Gamelab conference in Barcelona today about Flappy Bird, its phenomenal success, and what he's doing next.

PocketGamer.biz was down there to scoop up all the details, so head on over there to get the full story. We'll stick with the highlights over here.

Firstly, Nguyen spoke about the game he's currently working on.

"I am making a big game now, and I see it as many small games put together. My job is to synchronise those components in order to create one unique experience."

"My new game will focus on competitions between players who can see each other in the game. I will also introduce new obstacles while maintaining the simplicity of the gameplay that Flappy Bird has." 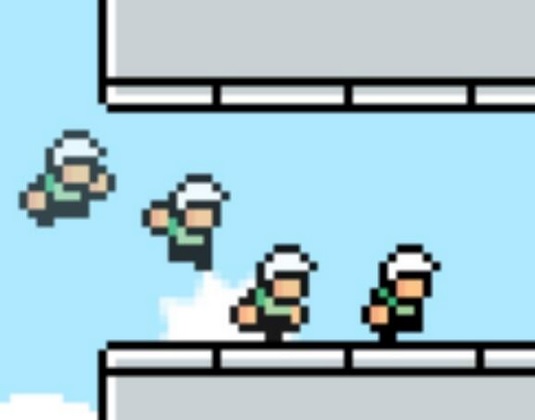 It seems that this is a separate game from Flappy Bird. Specifically, the one Nguyen posted a picture of on Twitter back in May.

Presumably, though, Nguyen is also working on Flappy Bird as well.

As you probably know, Nguyen took Flappy Bird down from all digital stores earlier this year. But he did reveal plans to bring it back in August with some changes.

In an interview with David Kushner, Nguyen revealed that these changes would include a cool down system. This means you'll have to wait a few minutes to play after every few rounds. This is to make it less addictive.

There will also be new characters, a new art style that isn't pixel art, multiplayer, and new obstacles and environments.

There is another noteworthy snippet to have come out of Nguyen's talk in Barcelona.

Nguyen cleared up some rumours by stating that Nintendo had never contacted him about a lawsuit.

"I can confirm that Nintendo haven't been in contact with me about any lawsuit. They have never complained about my games."

These rumours emerged due to the green pipes in Flappy Bird. They have been previously compared to the iconic green pipes in Nintendo's Mario games that they resemble.

The rumour was that Nintendo had threatened Nguyen with a lawsuit unless he removed the pipes. As we now know, this isn't true at all.

So there we go. If you want to read up on Nguyen's influence for Flappy Bird, and other insights, head over to PocketGamer.biz.