F2P Inspector - How much will you spend on Fire Emblem: Heroes?

Welcome to F2P Inspector, a new feature that focusses on the the free to play systems of notable new mobile games.

Of course, we already cover the impact of F2P in our game reviews - but only in passing. There are usually other, more interesting things to talk about in the limited space we have, like gameplay and graphics. Right here is where we hope to deal with the nitty gritty.

Let's boil this down to the essential things you want to know about Fire Emblem: Heroes and its F2P system.

What do I need to pay for?

Nothing, technically - at least not in the early stages. It seems possible to play through Fire Emblem: Heroes's campaign mode, training mode, arena mode, and its special maps without paying a penny.

The game's main currency is Orbs, which are used primarily to summon new heroes (there are upwards of 160 of the suckers, by our count). However, these Orbs are earned at a rate of one per map completion.

With fresh summons costing five Orbs each, and subsequent summons cut to four Orbs if done in quick succession (up to four times), it's not too much of a grind unless you're trying to 'catch-'em-all'. I know, wrong Nintendo series.

How much do Orbs cost?

If you do indeed want to splurge on masses of summons - which I have to restate is completely unnecessary - then you'll have to purchase a whole heap of Orbs with real money.

The Orb costs are as follows: 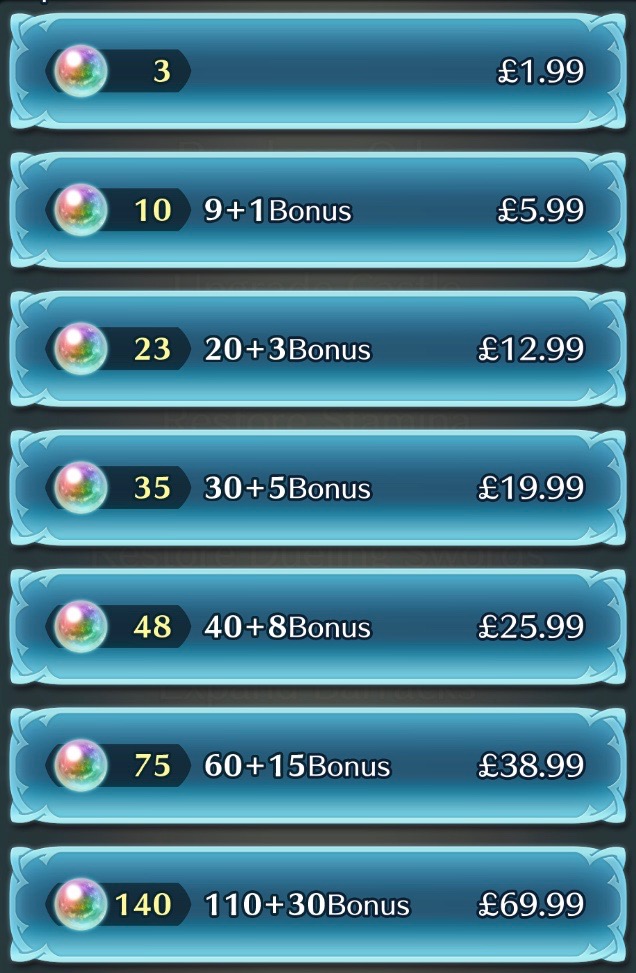 Are there any hidden costs?

Where you may eventually run aground is with Fire Emblem: Heroes's Stamina system - but even then it's pretty forgiving. Each battle you enter eats up a certain amount of your stamina points. You have 50 to start with, and these automatically regenerate at a rate of one every five minutes.

Battles themselves cost varying amounts according to how difficult there are. For example, the first chapter of the Story Maps ask for two stamina points to enter a fight, while chapter six - which sees you fighting against level 12 enemies - costs six stamina points.

Manually recharging your stamina points costs just a single orb, so the only time you'll find this stamina system really grating is if you completely run out of both Orbs and stamina at the same time. The easiest way around such an eventuality would be to wait ten minutes for two stamina points to recharge, then re-enter the first story battle to win an orb and use it to replenish your stamina. 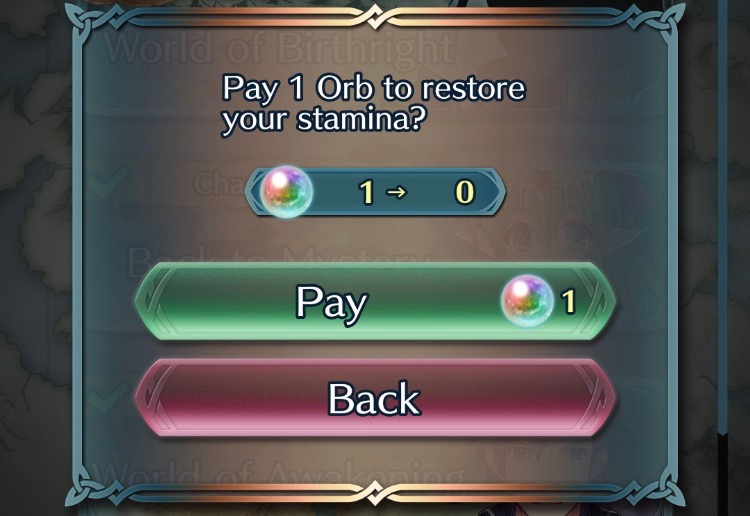 How high this stamina increase will go I'm not sure at present, but it's manageable right now. I'll report back if anything changes drastically.

Another possible cost is the game's Arena battles, which pitch you against another player's team. You need to spend a unique sword currency to engage in such fights, and you only get three swords at a time (though they replenish over time). Again, it only takes a single orb to instantly recharge your sword allotment.

You can also pay Orbs to improve your castle (to boost EXP gain) or barracks (to increase the number of heroes you can have). Again, though, I don't feel that either of these is essential to play - nor is the asking price expensive in these early stages.

At the time of writing, I had spent several hours playing Fire Emblem: Heroes - and I didn't even come close to feeling like I needed to spend money on it. I did run out of stamina once on this first day, but a freely gifted item replenished the bar instantly.

I can't envisage anyone feeling so impatient as to pay to replenish this stamina bar. Where the F2P money will come in, I suspect, is from those wishing to unlock the vast number of summonable heroes.

This could prove irresistible for some, but it should be emphasised that you don't need lots of heroes to succeed in the game proper. After my first day of play I had assembled a formidable team of five-star heroes, with 12 heroes of varying abilities in reserve.

With no perma-death system (a feature of the main Fire Emblem games), I can't see the need for spending on more - though I'm not a completionist by any means.

Of course, often a game's F2P systems don't really kick in until some hours in, once the game has its hooks in you. I'll be spending a lot more time into Fire Emblem: Heroes, so I'll update this piece if my findings warrant it.