Fans of Final Fantasy Brave Exvius can now enjoy a host of Tomb Raider-themed events in the tactical RPG. From now until October 20th, the Tomb Raider Collaboration Event rewards players with “Ancient Gold Pieces” Raid Coins, which can be used to perform box summons after the collab event is cleared. Relics are also up for grabs to be crafted into Esper Ores.

Of course, a Tomb Raider collab should highlight the main heroine herself, and for a limited time, players can summon a Lara Croft Unit and Vision Card, along with the A Dino-Mite Battle vision card. Legendary Lara Croft Neo Vision can also be used by players in the Lara Croft Intro Quest to give those who haven't summoned her an exciting trial run of the unit's abilities. 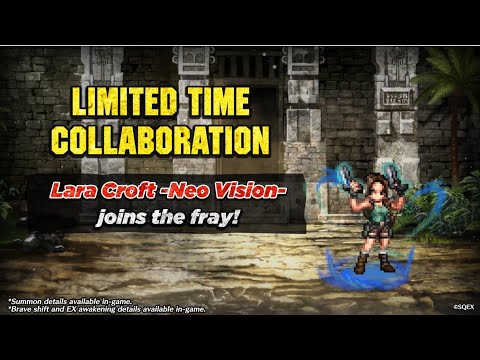 Throughout the crossover event, players will be able to earn awesome bonuses simply by logging into the game. The daily login bonus rewards include Lara’s Fragment, lapis, a summon ticket, and so much more. Special Exchange Coins can also be exchanged for in-game goodies such as the Transcension Pearl and 1/10 NV Summon Tickets.

Finally, the Weekly Free Summon lets players score a weekly free 10+1 summon with one guaranteed 5-star or NV unit. This will be up for grabs until October 20th, so there's plenty of time to pray to the RNG gods and hope that they reward you with their favour.

If you just can't wait to join in on all the fun during this limited-time event, you can download Final Fantasy Brave Exvius now as a free-to-play game with in-app purchases on the iOS App Store and on the Google Play Store for Android devices.