My name is Guybrush Threepwood, and I want to be a cowboy!

The first episode of comedy retro-themed point-and-click adventure Fester Mudd: Curse of the Gold is now available for iPhone and iPad.

The game stars a hapless cowboy named Fester Mudd, who goes on a dim-witted quest to hire a gunslinger, cross the plains, and find untold riches in the desert.

Along the way, you'll be stopped at every turn, and so must overcome each hurdle by talking to characters, hunting for items, and using your loot to solve tricky puzzles. The usual stuff.

Fester Mudd: Curse of the Gold has pixellated graphics, no voice acting, and is backed by synthy chiptune music. But that's all part of the charm, for the designers describe the game as a "love letter" to classic point-and-clicks like Monkey Island and King's Quest. 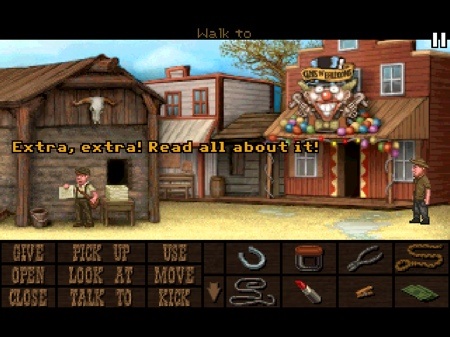 And the team has the chops to pull it off.

Fester Mudd: Curse of the Gold writer Josh Mandel designed games like Space Quest 6 and Freddy Pharkas at Sierra. And the game is published by Replay Games, which is currently working on the crowdfunded Leisure Suit Larry remake.

The first episode of Fester Mudd: Curse of the Gold is out now on iPhone and iPad, and costs 69p / 99c. An Android version is on the way - as well as the last two episodes in this three-part adventure.