Second in a series celebrating the handheld systems of yesteryear

If you missed it, our first Handheld Classics feature covered the SNK Neo-Geo Pocket.

When Gunpei Yokoi was tragically killed in a road traffic accident in 1997, he left behind a portable video gaming legacy the likes of which we're unlikely to ever see again.

Starting out at as a lowly maintenance engineer at Nintendo, Yokoi's rise through the ranks was prolific and he gifted the company with some of its most innovative and successful products, including the iconic LCD Game & Watch range and the best-selling handheld of all time: the Game Boy.

Sadly, Yokoi's tenure at Nintendo ended on a rather sour note. His final product for the company was the ill-fated Virtual Boy, a misguided attempt to bring crude 'virtual reality' gaming to the marketplace. It proved to be Nintendo's first real taste of failure in the hardware arena and it is rumoured that Yokoi was subsequently treated like an outcast within the company.

Realising he could do nothing of worth at Nintendo he resigned in 1996 to set up his own business, named the Koto Laboratory. It's here that he began work on a handheld that would prove to be the only serious challenger to the dominance his former employer exerted over the portable gaming industry.

However, as a tiny start-up firm, Koto Laboratory didn't have the clout to produce this new machine on its own. A powerful partner was needed in order to make Yokoi's dream a reality and thankfully the massive toy manufacturer Bandai, previously famous for creating ranges such as Go-Bots and Digimon, was looking to expand into the portable hardware arena. A partnership was formed that would ultimately result in the WonderSwan. 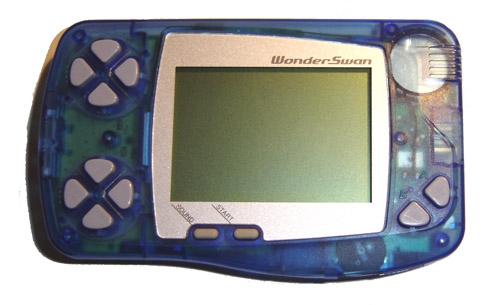 Sadly, Yokoi would not get to see the fruit of his efforts. The aforementioned traffic accident took place on October 4th 1997, when Yokoi was travelling with Nintendo businessman Etsuo Kiso. After being involved in a minor scrape with a truck, the two men alighted from their stationary vehicle to inspect the resultant damage and were hit by another car. Kiso survived but Yokoi was badly injured and pronounced dead two hours later. Therefore, his final contribution to the world of video games would be released posthumously in 1999.

The WonderSwan may have boasted a rather silly name but Bandai was deadly serious about challenging Nintendo for control of the highly lucrative portable gaming market. In March '99 the fledgling console was pushed onto shop shelves in Japan in a range of different hues, including such outlandish names like Skeleton Black, Camouflage and Sherbet Melon. In a neat gesture, the selection of different shades was decided by the public; Bandai held a vote on its website prior to the launch of the machine.

Facing competition not only from Nintendo but also SNK's recently released Neo-Geo Pocket, the WonderSwan nevertheless distinguished itself with some impressive sales figures. However, as SNK had experienced with its handheld, Nintendo's stranglehold was just too strong. By the time the WonderSwan was available at retail the Game Boy Color had been released and Bandai's hardware, with its blurry monochrome screen, was left looking a little archaic.

Just as SNK had been forced to do, Bandai updated its existing product with a colour display in order to maintain at least some degree of parity with Nintendo. The WonderSwan Color made its debut in 2000 and thanks to a cheap price point and the involvement of legendary Japanese developer SquareSoft, the enhanced machine managed to secure around ten per cent of the Japanese handheld market. This might not sound like much but was more than any other company had achieved previously. 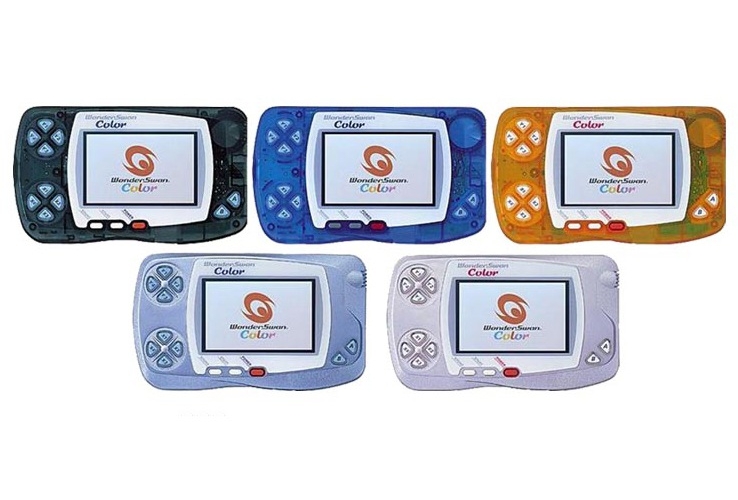 Sadly, the success was short-lived. Always seeming to be one step ahead of the pack, Nintendo launched the technologically superior Game Boy Advance the following year and this unsurprisingly had a massive impact on the fortunes of the WonderSwan brand.

However, Bandai wasn't quite prepared to throw in the towel just yet. Sensing that a little more could be eked out of the system, the company produced the SwanCrystal in 2002. This slightly improved edition of the WonderSwan Color showcased some neat embellishments but was still blatantly underpowered when placed alongside Nintendo's new console. What was clearly needed was a new and improved piece of hardware and although Bandai was rumoured to have been working on such a project, it unfortunately never saw the light of day. In 2003 the last few SwanCrystal units rolled off the production line and the company called time on the WonderSwan.

While in real terms the console barely dented Nintendo's cast-iron grip on the portable entertainment industry, it nevertheless did significantly better than the countless other rival machines that preceded it. SNK's Neo-Geo Pocket may have enjoyed a worldwide release but it couldn't match the Japan-only WonderSwan in terms of sales. Bandai at least proved that there could be a viable alternative to the incumbent Game Boy, and those gamers that lapped up the numerous system exclusives can justifiably look back on the console with fond memories.

When the WonderSwan design was first unveiled it caused quite a stir. The console came complete with two D-pads (one on top of the other on the left-hand side of the machine) that allowed the user to play the system vertically as well as horizontally. Some games, like Beatmania, Gunpey (named in tribute to the late designer) and Magical Drop required the player to hold the system in 'portrait' mode in order to play, and because the D-pads were actually made up of four separate components, they doubled perfectly as fascia buttons. However, this unique set-up wasn't universally liked by gamers and caused problems for some titles, as the lack of a unified D-pad made pulling off smooth motion commands (like those seen in 2D fighters) notoriously difficult.

The other surprising aspect of the WonderSwan was its size. Compared to the original Game Boy the unit was pleasingly thin and compact. The first iteration of the console featured a black and white screen that was impressively large but suffered from a disappointing amount of motion blur. However, where the console really triumphed was portability – running off a single AA battery, the WonderSwan could provide 40 hours of entertainment; for the time this was easily the most battery-friendly portable money could buy.

When the Game Boy Color launched, Bandai quickly retreated to the drawing board and released an updated version of its existing hardware. The snappily titled WonderSwan Color showcased a 2.8-inch FSTN reflective LCD display and backward compatibly with existing monochrome software. The casing design was subtly modified, too; the power button was relocated from the side of the unit to the front, thus avoiding any accidental presses during game play – a common occurrence with the monochrome WonderSwan.

As mentioned, the final hardware revision came in the form of the SwanCrystal. Named because the TFT display offered 'crystal-clear' viewing quality that far surpassed that witnessed on the previous unit, this edition was almost identical to the WonderSwan Color, save for some purely cosmetic differences.

Because the WonderSwan was never released outside of Japan, many of the games unsurprisingly contain copious amounts of Japanese text. This rather unfortunate fact renders some of the console's finest titles unplayable to those who can't read the language.

SquareSoft produced several notable games for Bandai's machine, including ports of Final Fantasy I and II, aviation RPG Blue Wing Blitz, mecha strategy title Front Mission and cute adventure game Chocobo no Fushigina Dungeon. SquareSoft's support for the console stemmed from the fact that the company had experienced a very public falling-out with previous bedfellow Nintendo and had refused to develop for the company's hardware. When the two former allies kissed and made up shortly afterwards, SquareSoft's focus shifted to the GBA and WonderSwan development was effectively terminated, dealing the Bandai platform's chances of long-term success a fatal blow. 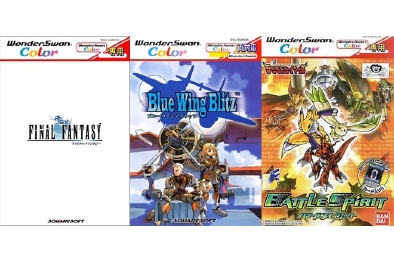 SquareSoft aside, the WonderSwan nevertheless managed to attract a fair number of big-name developers, including Taito, Capcom and Namco. Titles like Ghosts 'n' Goblins, Mr Driller, Guilty Gear Pocket, Pocket Fighter and Rainbow Islands all appeared on the console, proving that the WonderSwan was seen as a legitimate option for companies wishing to branch out their portable development. While developing for the market-leading Game Boy made sound business sense, the significant amount of competition on the machine made it increasingly tricky for some publishers to make a profit.

The WonderSwan was undoubtedly home to some truly brilliant titles, and unsurprisingly Bandai was behind many of them. The aforementioned Gunpey was the console's answer to Tetris and was so successful that it has recently been updated for the DS and PSP. However, it falls to Japanese anime licence One Piece to give the handheld what is arguably its finest hour – Grand Battle Swan Colosseum. Boasting massive, well animated sprites and some seriously addictive 2D brawling action, this thoroughly enjoyable game gave many GBA titles a run for their money and is practically worth purchasing a WonderSwan for alone. 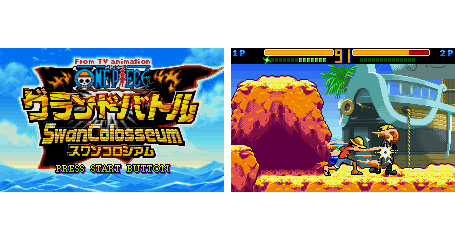 Sadly, the same can't be said of some of the other games in the WonderSwan catalogue. Many of the key titles for the machine were decidedly lacklustre and arguably went some way to damaging its reputation. A conversion of Sega's Golden Axe, for example, was crippled by dodgy controls and inconsistent collision detection – a crying shame given the graphical splendour it showcased. Similarly, Namco's Tekken franchise was given a rather disappointing outing, appearing not as a fighting game but as a weak Pokémon-style card game.

Ultimately, the WonderSwan couldn't hope to compete with the Game Boy when it came to volume of software, but regardless of this fact Bandai's challenger did host some truly decent titles – it's just a shame that the ability to read Japanese is so vital to enjoying many of them.

Thankfully, buying a WonderSwan console isn't a costly exercise these days. Auction sites like eBay are awash with units, with some brand new units selling for as little as £15. Many hardware bundles were produced during the lifespan of the machine, the most notable being the Final Fantasy editions. These tend to hold their value better than the console on its own, but still shouldn't break the bank if you feel inclined to make a purchase. 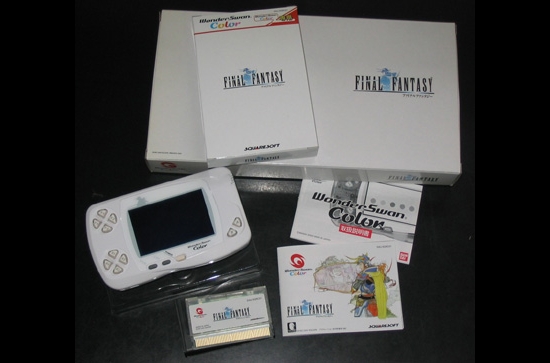 However, while the hardware is cheap as chips, the same can't necessarily be said of the software. As is often the case in the second hand market, the more desirable titles sell for many times more than their original retail price, with a few exceptions (the quite frankly essential One Piece: Grand Battle Swan Colosseum is fairly common and therefore relatively cheap).

One of the most expensive games is the wonderfully named Judgement Silversword, which actually started life as a game produced for a coding competition and was deemed worthy of a full retail release, albeit in limited numbers. A highly playable vertical-scrolling shooter, it has been known to fetch almost £100 in collector's circles.

Whatever your interest is in this unique and relatively unknown machine, the low price of the hardware should make dipping your toe into the water a heck of a lot easier.