To be bundled with Japanese Face Training game

It's probably getting things the wrong way around to say anything Sony can do Nintendo can do better, but with the PSP Go!Cam released in Europe last month, Nintendo has announced its own DS camera.

Unlike Go!Cam, which feeds into the general functionality provided by the PSP's inbuilt software, as well as having its own Go!Edit editing package, Nintendo's effort is less utilitarian, being purely game-related. After all, the DS doesn't really offer the same connectivity and memory storage options as the PSP, which has a mini-USB port and Memory Stick Duo flash card capability. 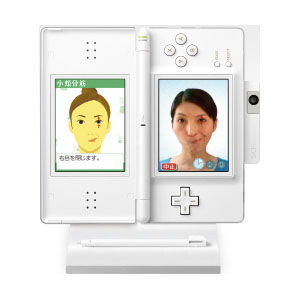 The game in question is Face Training, which currently has only been announced for a Japanese release, and somewhat surprisingly perhaps is being developed by Advance Wars studio Intelligent Systems.

According to Wired's GameLife blog, this is a 'game' that will video you while encouraging you to do face exercises in the hope it will make you look younger and less saggy.

The camera, which seems as if it's more focused on video resolution rather than stills photos, uses the DS's GBA slot for power and connectivity. It also comes with what appears to be a plastic stand, so you can position your DS/camera combo while gurning towards it.

It's not yet known whether the camera will be compatible with the original DS consoles, or whether Nintendo has any other plans for its use.

Face Training is due for release in Japan on August 2. No details about European or US availability have been made available.

Relax and tone your face and neck with DSi's Face Training