EXIT - The Curse of Ophir is an escape room puzzler that sees players exploring the titular Hotel Ophir in search of evidence that explains the disappearance of famous writer Tory Harlane. However, the hotel is strange and seems to have a mind of its own. We decided to send our App Army inside to see if they could uncover the mystery.

This game makes a hell of a first impression. Some great hand-drawn graphics that are colorful and atmospheric. The music fits the mood and the voice acting is good. You are an investor looking for a missing author in a hotel. Gameplay is a point and click puzzle much like PC games in the 90s. So far I’m quite enjoying it and I recommend it.

This is an excellent example of the puzzle genre. The graphics are sharp and the background music atmospheric. The puzzles were difficult enough to keep me entertained, with the odd easy one to keep it flowing along. The story is simple to follow with a mystery running through it, so players aren’t reliant on the puzzles to keep them interested. I have always liked this type of game and this is a good example. The price is right and I think value for money. Taking all into consideration I would recommend this game. 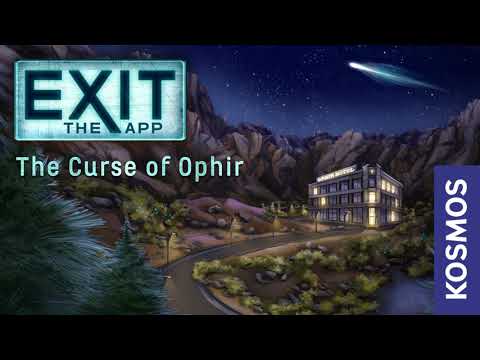 EXIT - The Curse of Ophir is a game that reminds me very much of the text adventures on early home computers. As you investigate the disappearance of an author in a creepy hotel you must solve a series of puzzles to progress. You must search each room for hints and objects to help you solve the puzzles. The difficulty of the puzzles ramps up quickly and this can get frustrating, however, the three-stage tip system helps a lot. Graphics and sound do the job and the creepy narration is a nice touch. If you like puzzles game then this game will be right up your alley. If you don’t, then this game will quickly frustrate you.

This is an entertaining mystery game that lays clues around for you to solve puzzles and an over-arching mystery. I liked that it’s not really so much a hidden object game. My eyesight isn’t what it once was so I find those annoying. This gives you a few large objects throughout various rooms... they’re easy to find, but you have to use logic and sometimes help to put the clues together in order to progress.

So I found the puzzles challenging but not too difficult. I liked having to use my iPhone’s features to get through some puzzles. That actually kind of added to the immersion quality for me, and I think it was a clever trick from the devs. It’s not too long, nor is it too difficult. Granted there are lots of mystery/puzzle games out there and none of them are all that terribly different. But some are better made than others, and this is one of them.

In this kind of subjective puzzle game, technical performances are important: if the game is badly finished, we do not only lose in immersion but the game then also loses in readability and becomes difficult to play and irritating. In this one, graphics and music are rather good and the handling is impeccable. The puzzles are quite few but very clever. There is no hidden push button to find here, but true logical and interesting riddles (although some require the use of the phone's own resources, which in my opinion may break the immersion a bit).

It is not a long game, and you are in front of the epilogue after a few hours, but some puzzles give the player real satisfaction of having understood their trick. Unlike some other mobile puzzle games that offer a long trip but a repetitive one, this one avoids all weariness and provides some moments of real pleasure and pride. It's up to everyone to decide what they are looking for more, but this game despite its limitations knows how to stand out from its counterparts.

Next Up :
Interview: Deyan Trichkov discusses March of Empires' new faction, the Shogun