Is the newly launched Supercell's Everdale any good? Let's find out.

Everdale is Supercell's new world-building simulation mobile game, created at their Helsinki studio and is currently available in certain regions in beta form. It is similar to Hay Day, in the sense that most of the game is about building up a settlement in a peaceful and calm world unlike other games like Clash of Clans, where there are constant battles to worry about.

In Everdale, you simply need to think about upgrading your village and contributing to the progress of the valley you are a part of.

Everdale will start off slow. It'll take a while before you've got enough villagers and resources to line up a good, well-built community. Compared to other Supercell games, this one definitely takes its time to unfold when it comes to building.

But that isn't necessarily a bad thing. You get the time to explore all the game's features and understand how to manage your villagers and divide the work. It requires you to assign tasks to villagers individually like cooking food, farming, harvesting, chopping up and collecting wood, building and carrying out research. 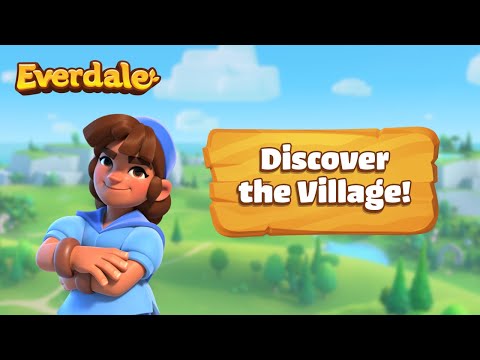 Build a world devoid of war and conflict

As we previously mentioned, Everdale isn't about fighting or looting players. It's about building up communities and a safe haven. The gameplay is definitely more laid back and calm. The game has a co-op mode, where players can come together to play in teams of up to nine villages.

The game hasn't been released globally, so there are not a whole lot of players at the moment. There's definitely tons of content to explore, even in terms of gameplay. Again, compared to other games, it definitely feels slower in pace, but managing villagers and giving them tasks will keep you busy.

Also Check out: Everdale - Here is how to get free 1000 gems by inviting friends

In terms of audio, the game has the usual Supercell soundtrack style. It's casual, and hence the sound effects are okay. The controls are standard click and touch style. The UI is also pretty simplistic, and after spending a while getting accustomed to them, it won't be too difficult.

The graphics have a similar feel to other Supercell games. Most of them have that signature look and color scheme, but immediately, it seems like the game's graphics could be a touch sharper. The graphics in Clash of Clans and Hay Day definitely feel better.

Everdale is a pretty simple, yet exciting game, there are no wars, but the game still keeps you on your toes all the time. You will have to upgrade your buildings, research, do valley tasks, and whatnot! I would say Everdale is a unique game. It has the potential to be big as an individual game and bring the entire spotlight on the quality mobile casual games that are not entirely about battling.

Just like other Supercell Games, it has a kind of pay-to-win concept but then who are you racing against? So you can take your time.

Everdale is available to download in selected regions via Google Play and App Store.

Next Up :
App Army Assemble: Rush Rally Origins - Is this new racer worth taking for a spin?

Here is how to download and play Everdale on Android

Everdale - How to change the name of the villagers for free

Everdale's latest update lets you create your own valley

Everdale - What is efficiency, and how to improve it?