Duel Summoners is a brand new PvP puzzler that's available now for iOS and Android. It comes from Nyou Inc, who you might be familiar with from their previous title Dragon Chronicles. It looks to blend multiplayer action with match-3 puzzles and summoning different heroes.

Nyou Inc has described Duel Summoners as being a tug-of-war between players where they'll look to match three or more blocks of the same colour together to summon their heroes to the battlefield. Once summoned, these characters will automatically begin to chip away at the opponent's health bar.

The game's heroes can all be upgraded and each possesses unique abilities that could prove useful in turning the tide of battle. These range from powerful attacks to providing handy buffs. There are over 30 heroes to collect and players will need to create a team of four to take into each battle.

The developers hope that by using the tried and tested match-3 setup, Duel Summoners will be an easy game for any to pick up and quickly get to grips with. You can check out some gameplay in the embedded video below. 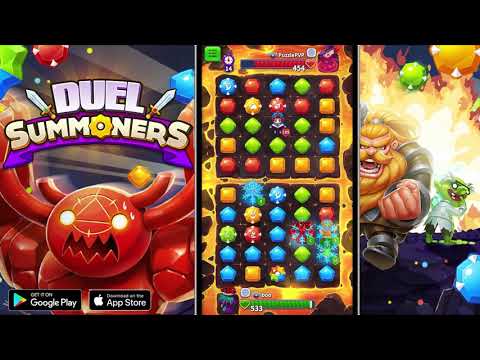 Discussing the game, Jung Hwan Kim, CEO of Nyou Inc said: “With Duel Summoners, We aim to satisfy both the strong tradition of competitive PVP mobile gaming and the need for simpler online gaming experiences that just about anyone can understand and enjoy pretty immediately.”

They added: “The iconic Match Three gameplay has turned out to be a perfect match for our mission to bring PVP to the masses.”

Duel Summoners is available now over on the App Store and Google Play. It's a free-to-play game with in-app purchases.

Looking for more stellar puzzle games to play on your phone? Here are 25 of the best available for iPhone and iPad
Next Up :
CROSSFIRE: Warzone adds new Sudden Breach content and other quality-of-life improvements in latest update