The venerable Doodle Jump has donned the fearsome black cowl of the ninja in its new and massive update.

Version 3.0 of the Pocket Gamer Silver Award-winner Doodle Jump introduces players to a new Ninja Theme along with plenty of new power-ups, obstacles and enemies.

Most impressive among these new features is a store mechanic, which allows players to purchase and upgrade power-ups and outfits with special abilities by redeeming coins collected during playthroughs.

The new outfits in the Ninja Theme add interesting mechanics to the original Doodle Jump game.

Players with the Sumo outfit can execute a screen-shaking stomp as they land, and the Shadow outfit makes the player’s avatar invisible to enemies.

Those who felt the propellerhats and jetpacks of the core Doodle Jump game weren't powerful enough to suit their needs can now upgrade them in the Ninja Theme's store to boost their efficiency.

Players can also purchase new Head Start and Resurrection upgrades that provide a boost to the launch jump and an extra life, respectively.

At current, the new version 3.0 update is only available for the iPhone version of Doodle Jump. 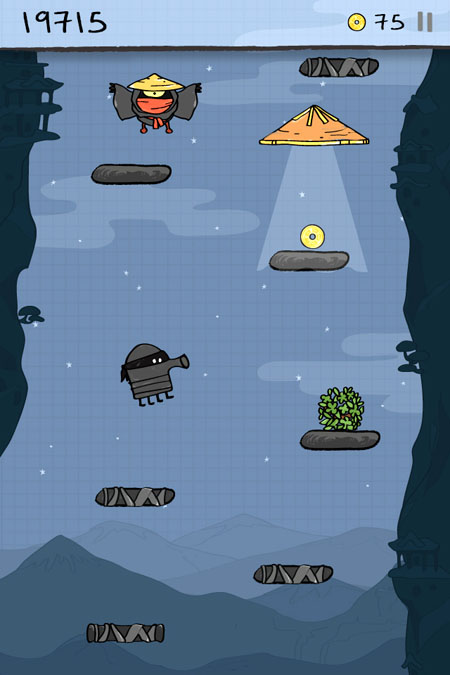 After a long wait, Doodle Jump finally hops onto iPad