We will fight them on the sandy bits

So, when we heard the Philadelphia-based developer was making another one, we thought: "Cool, we'll probably write something about that."

After the success of Drive on Moscow, which we talked about with Shenandoah's David Dunham recently, the wheels are in motion for the true sequel to the Silver Award-winning Battle of the Bulge.

It's called Desert Fox: The Battle of El Alamein. Here, Shenandoah focuses on the pivotal land battles in Egypt during World War II. And it has really big representations of really big guns in it, as you can tell in the exclusive screenshot below. 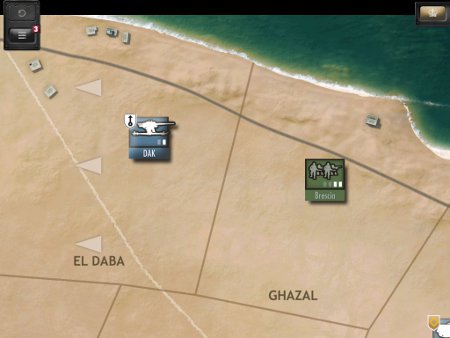 Just look at the SIZE of that shooter. It's a Flak Gun, apparently. It's one of the two new units that Shenandoah has confirmed will be in this upcoming desert battler.

There'll be a thick and juicy campaign mode for you to sink your teeth into here. You'll be able to play as either the Commonwealth or Axis troops.

Throw in some mines, ridges, and asynchronous multiplayer, and you're left with a heavy, heavy strategy game in the vein of Shenandoah's critically acclaimed back catalogue.

Desert Fox: The Battle of El Alamein should go live in the spring. We'll let you know more when we know more. If you want to know more. I'm going to guess you do.