Fireside chat about Battle of the Bulge, King of Dragon Pass, and Drive on Moscow

If you're at all interested in strategy games on iOS, you've probably heard of Shenandoah Studio and its genre-defining war games Battle of the Bulge and Drive on Moscow.

What you might not know is that the development manager at Shenandoah, David Dunham, is an old hand when it comes to strategy games.

He's the mind behind the extraordinary King of Dragon Pass, a bizarre blend of grand strategy, exploration, and Choose Your Own Adventure gamebook. It's one of the most unique games I've ever played.

I figured that one person being responsible for three groundbreaking mobile games couldn't be a coincidence. Eager to know more, I hunted him down for a chat.

Pocket Gamer: King of Dragon Pass is a highly unusual title. From where did the idea come?

David Dunham: King of Dragon Pass is inspired by a combination of the Icelandic sagas; the fantasy world of Glorantha; and the paper & dice role-playing game Pendragon.

In Pendragon, you could play as your character and his descendants over a 75-year arc, very much like the family sagas where children would avenge their father. 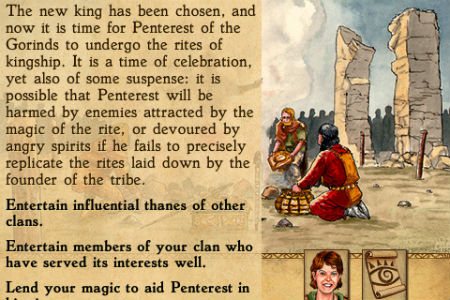 It's set in Greg Stafford's highly detailed anti-Tolkien fantasy world Glorantha. You must have learnt an awful lot of Gloranthan lore to make King of Dragon Pass!

More accurately, I think, the team made up a lot of Gloranthan lore!

Glorantha is one of the few organically grown fantasy settings, and it has an incredible coherence and richness.

As I said, I was already familiar with this. We just needed to add lore that was specific to the game, such as hero quests for gods other than Orlanth. And we could ask the creator if we had any specific questions.

So Greg was involved with the project?

Yes. Greg Stafford created both Glorantha and the Pendragon game. Originally, I adapted Pendragon to run a character-based RPG of the resettlement of Dragon Pass.

Later, I was talking with Greg and we realised that we both wanted computer games that were more story driven. I loved the story snippets that Scott Bennie put in the computer game Castles, but I wanted more of them.

Greg and I bounced ideas around a bit more. At this point, though, the basics of the game were pretty solid.

Did the game concept change much during the course of development?

Needless to say, many specifics changed once we started actual production. A few ideas got dropped, and we added battle scenes (thanks to Rob Heinsoo). But the game is pretty much what I had in mind at the beginning.

I was going to say "except for running on a handheld", but I think my first design sketches for an Icelandic saga game were for Newton.

The game was originally developed for PC. Were there any challenges in porting it to mobile?

Two thirds of King of Dragon Pass was already cross-platform. And the part that wasn't was the user interface, which we obviously needed to change.

I iterated on the UI design for some time before I came up with something that would work on the smaller screen. Once I had a design, the only real problem was the scope. There are about 50 distinct screens that needed to be designed and implemented.

Oddly enough, given that it turned out to be the optimal platform, iPad was a bit of a challenge. The original artwork was scanned at 640x480, so I had to come up with a new design that didn't use full-screen art. Once I had that, each of the 50 screens had to be reworked.

Do you think tablets are a good platform for strategy games?

iPad is a great platform for thoughtful games. You have a pretty powerful system with a decent-sized display, and you can pretty much guarantee that any player can play any other because she already has an account she can use on Game Center.

The touch gestures make navigating a map easy. And you're running a multi-core CPU that can power a computer opponent.

You very much need to design for your platform. iPad has a smaller screen relative to a computer, so you can't be lazy about information design. On the other hand, you can't just throw in the kitchen sink.

What about for military simulations like Battle of the Bulge?

The nature of the game is a factor, too. It's much harder to imagine a complex real-time game on iPad. Boardgames aren't always a good fit for online play. You don't want to resolve an attack, only to have to wait for your opponent to decide to retreat before you can decide on whether to advance after combat.

John Butterfield explicitly designed Battle of the Bulge for iPad. The map fits reasonably on the screen; there aren't hundreds of pieces to deal with; and player turns are short but discrete (so you can play readily over Game Center). 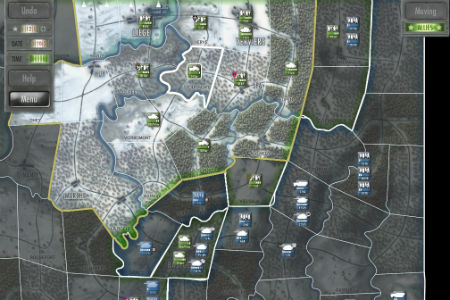 With Battle of the Bulge, you pretty much re-invented mobile war gaming. What were the original design goals for the project?

Probably just that. We wanted to combine serious historically accurate gameplay with the ease of use and polish of the best computer games.

You added a variety of in-app purchases to Battle of the Bulge after release. Have those been a financial success?

There's certainly precedent for selling content in premium games, e.g. Battle Academy. And we wanted to give the player actual game value, instead of manipulating her to buy something that really isn't content.

We did run into the problem that Battle of the Bulge as a game wasn't designed around in-app purchases. It took us a while to come up with content that would be a reasonable addition to the game.

I know that Battle Academy's "lite" free version didn't have a great conversion rate. However, you've made a similar free version of Battle of the Bulge. Has it worked out?

So far as I know, our conversion rate is higher than the industry's.

Battle of the Bulge is great fun to play, but there are historical elements, like the encirclement of Bastogne, that aren't reproduced in it. Do you think that's a failure in the game?

The goal, of course, is not to replicate history - you could watch a movie or read a book for that. Instead, we aim to give the player the same sorts of choices and challenges that her historical counterparts had.

For example, Bastogne is a major crossroads, so it's important to capture or hold. Given that, it's likely to be a battlefield. And while it may not end up encircled in every game, it often does end up so on account of supply.

Supply was one of the major concerns in the original battle, and that's why you need to worry about it, too.

How do you feel about realism in historical war games generally?

Again, this is a game that needs to be fun, not a recreation of history. So, we did a fair amount of iteration to make sure we found the correct balance.

If I recall correctly, Victory Points were a pretty major tool here. That seems pretty common in simulation games. They're abstract, but they also represent the external factors that can't easily be part of a specific battle.

In Drive on Moscow, you use the same basic game mechanics as the ones in Battle of the Bulge. What did you do to differentiate the games and ensure players got a new challenge in Drive on Moscow?

Drive on Moscow needed to be true to the historical event, which was different from the Ardennes Offensive.

For example, the Russian winter played a major part. Given this, we needed to make sure the weather was obvious to the player, so each of the four types has its own map and sound effects.

I also thought that the game shouldn't be exactly the same only on a different map. Our designer, Ted Raicer, had included one unit that could air drop once per game. At one point, we were concerned that implementing this would be a lot of complexity for something rare, and dropped it.

But I really liked the idea of having a unit unique to Drive on Moscow, so I came up with a user interface and implemented the feature over a weekend. 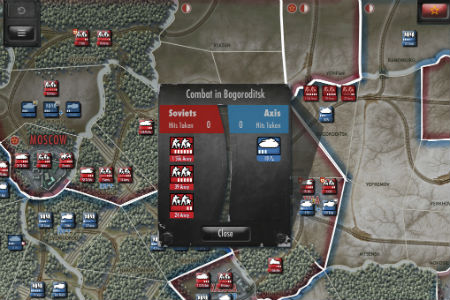 Both Shenandoah games so far have featured "personality-driven" AI opponents. What's the driver behind this?

Miguel Nieves has written a post on this. I think one reason, though, is that we didn't know how to play the game when we began. That is, what was a winning strategy?

With the 'utility' approach to AI, we could start by creating interesting ways to view each space, then tune to make better and better moves as the developers learnt to win.

By focusing on an interesting game, you also enable your opponent to have a bit more of a personality than a coldly calculating robot. And as a practical matter, it's data driven, so we can have more of the team creating AIs.

Do you think it's been a success?

It worked pretty well in Battle of the Bulge, but Drive on Moscow is both larger and longer. This tends to amplify any weaknesses in the the AI. So, we added a calculation layer on top of that.

Interestingly, it still uses utility rather like an instinct, to help guide the moves that it evaluates. Think of it like your gut saying that you should attack Orel but your head then thinking about what the consequences would be. Or a fast-acting instinct that you can override with intellect.

We did find it interesting that some App Store customer reviewers have taken a star off their game rating because the "personality-driven" agents are too easy, while other App Store reviewers took a star off because they were too hard.

One of the most noteworthy hallmarks of Shenandoah games is their high-quality presentation. I mean, military simulations are traditionally fairly drab. Why go to the effort of making such gorgeous-looking and beautiful-sounding games?

I'd turn that around: why make something in which you don't pay attention to the details?

A great game shouldn't be crippled by a poor user interface. Quality presentation is work. And if it makes Shenandoah stand out, so much the better.

I'd love to get more people playing games because they're not turned off by the appearance.

Your next game is going to be about the Battle of Gettysburg. Why the switch from World War II to the American Civil War?

Shenandoah always planned to do a variety of games. Eric Lee Smith had already designed a series of American Civil War games, which were well suited for the platform. My impression, though, is that people are more interested in conflicts that make for fun games than anything in particular.

After that, there's going to be another title with the underlying Battle of the Bulge / Drive on Moscow system but set in the Battle of El Alamein. Will there be more games with these mechanics?

Out at midnight: Drive on Moscow is an in-depth, historically accurate sequel to the Silver Award-winning Battle of the Bulge

Check out this exclusive preview trailer for Drive on Moscow