Dead Century is quite unlike anything you've played or seen before.

For starters, this Kickstarter game is set in the 1930s. You control a small party of three who are racing around the world to assemble a puzzle before the Nazis do.

The puzzle pieces are tucked away in dangerous parts of the globe, where monsters are often found to have been hiding out. 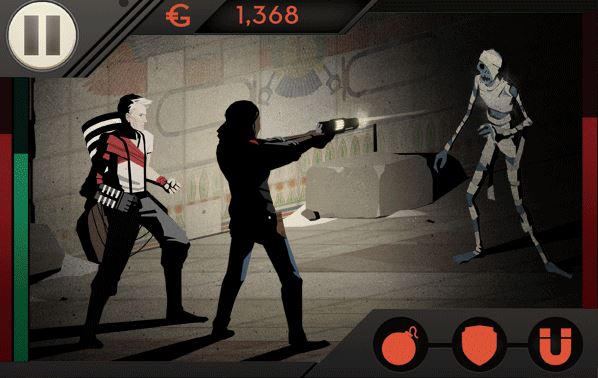 Combat in Dead Century can be boiled down to two things.

Either you're trembling through the dark in a top-down shooter. Or you're matching tiles to perform attacks and restore your shields during a stand-off.

What's further commendable about Dead Century is that each of the characters you control comes with three different appearances.

Your eye may be caught by the game's comic book-style narrative sequences, too. It seems that's plenty of humour in this puzzle-RPG, and that's always welcome.

The developer of Dead Century has already put a prequel to the game's main series up on the App Store [buy].

If you check it out, or just enjoy the concept of the game, then consider funding it on Kickstarter.

Next Up :
Becharmed is a new casual match-3 puzzler that has just soft-launched in select countries on Android