Dark Fear is not only inspired by classic Sierra adventure games from the 1980s, but it looks a lot like them, too.

It's for this reason that it stood out to me - those memories from my childhood sat in front of a computer screen came flooding back to me.

Don't worry if you're not familiar with those older game. Developer Arif Games assures us that Dark Fear will ease even the most novice of players into its dark and twisted story.

And on that note, all we know of the story is that you'll start out with nothing and the game's layers will slowly begin to unravel. We also know that its core theme is the occult and black arts. 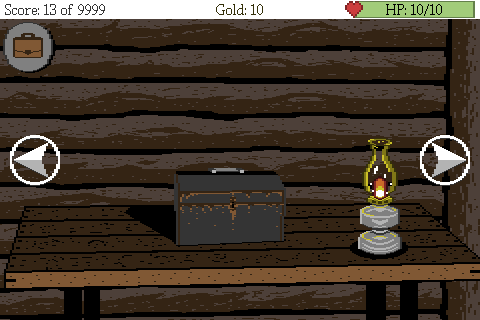 As far as it plays, you'll be exploring environments by tapping on arrows to navigate them. There are wells, dead bodies, and other objects to inspect closer.

Being a mix of horror, adventure, and also RPG, Dark Fear also has turn-based battling by the looks of it. One screenshot shows the player fighting a coyote with an axe.

There's no release date yet, but Arif Games is aiming to get Dark Fear out on iOS and Android by the first quarter of 2015. Check out its website for more details.

Dark Fear takes you back to the '80s with a retro-style creepfest, out now