Dan The Man is a humorous cartoon web series starring the eponymous Dan and his girlfriend Josie, a kickass pair of martial artists. Why is Pocket Gamer talking about this? Because an action platformer tie in has just launched on iOS and Android, silly.

If you combine Metal Slug with a brawler and liberally sprinkle humour over it, Dan The Man is the result. You run and jump through 12 levels, beating up enemies and blasting them with a variety of upgradeable weaponry.

As you can expect from Halfbrick, it's pretty full on in terms of action.

At review, we described Dan The Man as "A bright and bold platformer that might be a little formulaic but does everything it sets out to do brilliantly". What more could you ask for?

Well, the opinions of our hardened bunch of mobile gaming experts in the App Army of course! Here they are in all their glory.

Dan The Man is another great game from Halfbrick - it's fun and full of awesome power ups. It looks nice as well. There are loads of weapons to fight with and you can upgrade them. I like that you can pick between Dan or Josie - it's a nice touch.

The controls can be a little fiddly at times though. They're occasionally unresponsive. 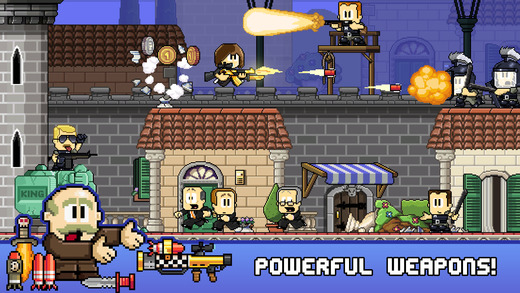 A fun platformer that allows you to play as various characters. There are a bunch of martial arts moves to perform, and you do so using several handy virtual buttons.

The graphics are funny, quirky, and appealingly cartoon. There are tons of enemies to confront and it provides a solid challenge. You'll need to upgrade your hero if you want to make it to the end.

Dan The Man is yet another retro-inspired platformer. I actually really like this one as there's loads to do and the controls are easy to pick up. The graphics are pretty good too - it's another winner from Halfbrick.

I'm in love with this. I like the retro vibe and how well it plays on an iPad. Having the ability to change weapons mid-battle is a really handy way to get out of tight spots, and there are loads of secret areas you can find to pick up more loot. The combat mechanics are intuitive and the ability to do combos reminds me of Double Dragon.

You can play as Dan or Josie and swap between the two as much as you like. You can also buy other characters via an IAP like Barry Steakfries from Jetpack Joyride. In fact, there's a pretty varied selection of Halfbrick characters available as an IAP - they're just quite expensive.

If you’ve played a mobile platformer, you'll feel right at home with Dan The Man.

It has an arcade feel about it. The sound and visuals are charming, the environments are nice, and I found myself taking the time to explore every nook and cranny rather than rush through it.

There's a nice sense of character progression as you can upgrade your moves, which makes combat feel more strategic rather than just button bashing.

Speaking of combat, it's fun but a little forgiving. You can switch between weapons during battles which is useful, and the aerial attacks help you get out of tricky situations.

With plenty of loot, collectables, and nice environments this feels like it fits nicely in with Halbrick’s already great portfolio. I enjoyed my time with Dan The Man and can see myself sticking with it for much longer.

This is crazy - and I mean crazy awesome. It's the best retro brawler I've played since Punch Quest.

Other than the slight control issues Dan The Man is certainly a winner in my book.

This has all the ingredients of a classic platformer. The graphics are bright, the sound and music quirky, and the controls easy to pick up.

As you scroll along and battle the King's soldiers you collect coins, food, and weapons. There are shops dotted along the way to spend your coins on weapon upgrades and food to top up your life.

With plenty of leaping and bashing, it's a great game that promises hours of fun.

Halfbrick is experienced in making games that are perfectly suited for mobile, and Dan The Man is no exception. The controls are great and responsive, the pixel art looks good, and the animations are fluid.

It's free to play with some interesting ad implementation. You'll come across statues which you can hit to watch an ad and receive random items.

The only downside to me is the length of the levels - they're too long and I don't appreciate it, despite the number of checkpoints.

Dan The Man is an absolute joy. It's beautifully presented and is really fun to play. It would be great as a platformer alone but the combat adds a lot to the gameplay.

The only issue I have is the MFi controller implementation - you have to press the D-pad all the way to the left or right to register movement. Please allow smaller values to trigger movement!

The App Army is Pocket Gamer's very own community of mobile game experts. Each week, we provide them with a bunch of free codes and early access to the hottest upcoming games so they can provide their thoughts in features like this. We also host regular community-driven events with them in mind like tournaments, giveaways, and multiplayer evenings. To join, simply follow this link to the page on Facebook and request access. We'll get you in right away!
Next Up :
Definitive Apple Arcade games list - Every available title so far

Halfbrick announces new lineup of games, updates, and a special Dan The Man 2 preview at Halfbrick Beyond 2023