Do you want to put the bad guys in their place in a very uber cool manner? Perhaps, as a ninja? If you answered yes to both, then Cyber Ninja – Stealth Rush Warrior might be the game for you. The product of a young indie development team in Karlsruhe and Berlin, Reija GmbH aims to offer a premium gaming experience to mobile gamers by utilizing challenging game mechanics with high accessibility and cool looking 3D graphics. 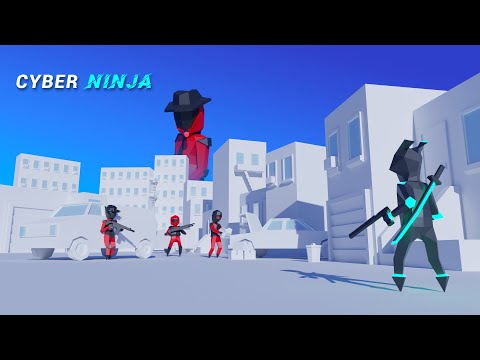 You will find yourself in a cyberspace that has been plagued by lawbreakers, evil thugs, and drug cartels. The entire world is in turmoil thanks to these goons. In this dire situation, the world has turned to the only man they think can end the war – you. You’re an assassin of the digital age who wears a futuristic suit that reminds me of the Tron series. Your two best friends are your piercing katana and gun. You have an absurd amount of firepower to take out all these bad guys and turn them into ashes.

Cyber Ninja will force you to be on your toes at all times. You must think and act fast while being absolutely merciless because these crooks don’t deserve one good thing. Thinking fast doesn’t mean you always go in all guns blazing. A lot of times you’ll be forced to employ stealth tactics to trick your enemies before killing them.

You control your character using a virtual pad where you must dodge enemy vision cones in order to remain undetected. If your ninja sees a clear shot, he’s gonna take it. Cyber Ninja – Stealth Rush Warrior will feature five worlds with 17 main levels and over 120 sublevels. Completing levels and killing enemies, especially the leaders will add more weapons and equipment to your arsenal. You can also unlock new ninjas like the Cyborg Ninja, the Knight Ninja or the Shinobi Ninja by using the game’s virtual currency.

Free cyberspace of crime once and for all by downloading Cyber Ninja – Stealth Rush Warrior for free on Google Play.

Level up your sneaky skills by checking out the top stealth-based games to play on mobile!
Next Up :
Final Fantasy VII: The First Soldier crosses 500,000 pre-registrations in just 4 days