Time for work...to defend the city!

Counter: Side is a game where you play as a CEO whose job is to help defend the world from monstrous creatures. You'll be able to do so by sending out skilled soldiers called "Counters". The game features beautiful 2D graphics that look straight out of an anime.

It has been out for a little while now but for the first time, it will officially be released all around the world as we have a confirmed date! The game plans to launch on May 27th, 2022.

Turn-based combat is a major aspect of the gameplay as you take on many mysterious monsters throughout the city and world. Each Counter has its own skills and abilities to help give you the upper hand in the battles that lie ahead.

You'll also need to build a rapport with each Counter. This will help you learn more about the world around you to figure out what's truly going on. You can do this by increasing each character's loyalty. This is also good as it will net you fresh new scenarios and cool rewards. 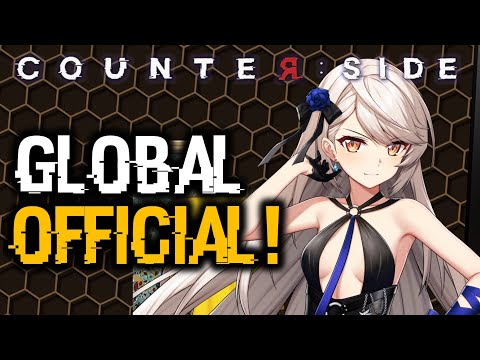 No two characters are the same, which is one of the nice things about a game like Counter: Side. You have a bubbly character like Yang Harim while having a more gruff character Lin Xiem with her old-school gangster attire and Tommy gun. We made a Counter Side tier list, that should be viable after the official release, and we will make certain to keep it updated in case some of the characters change a bit.

And with the game opening up its story more to you as you go, you're in for an intriguing ride of both combat and storytelling. Imagine, being able to uncover the many secrets of Counter: Side's world while taking in the vibrant, breathtaking art as well as the epic strategic style combat?

Really, when you think about it, Counter: Side is several games put into one. It features strategy, storytelling, combat, colourful characters, and a retro, 2D style of art that is splashed with modernity! You will be able to pre-register on the game's website to receive some rewards.

And so, there are reward tiers based on the number of gamers who pre-registered. So essentially, it's a community effort. The first reward is at 10,000 registrants and rewards you with 270,522 credits (which is cleverly numbered based on the release date of 27/05/22).

The grand prize will be earned if the community can get up to a whopping 250,000 (!) pre-registrants. This reward is a fresh new recruit on demand. All you need to do is pre-register yourself and hope that everyone comes through so you all can collect the treasures! Counter: Side is quite a versatile game so it will be fun to see how it evolves.

Next Up :
Genshin Impact's latest event called Spices from the West is now live