Clustertruck is an odd metaphor for life. You can hop along using as much or as little speed as possible, but your journey's never going to be easy and sometimes things just go to hell for no reason.

This game is brutal, unfair at times, and frustrating, but it's so, so addictive once you get over the need to scream. Where it has its positives, there are a few negatives to balance out the scales.

Clustertruck has one primary mechanic and a primary goal - you've got to jump your way towards victory at the end of the level. While that sounds easy, in first-person it's a little harder, and that's without considering the mass of trucks at your feet.

You have ten levels throughout the nine worlds, each of which introduces another obstacle or ups the difficulty.

While the controls are easy, and the range of abilities is basic to start off with, you can upgrade your skills as you earn more points, giving you access to things like 'Time Slow', 'Air Dash', and 'Double Jump'. 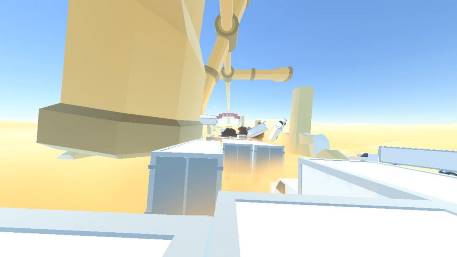 The more risks you take, the higher the number of points you get if you end up making it to the goall. At least you're rewarded for acting like a reckless fool.

You jump across the sea of trucks, but can't touch the floor otherwise you're sent back to the beginning. If you're like any normal human you'll probably see the fail screen a lot in your time with the game, but that's okay.

It's part reaction-based, part luck-based, and part skill based. Though, you don't have to be a ninja-reacting pro to be able to play. Clustertruck's nature means it's super simple to pick up and play regardless of your skill level. Whether you'll make it to the end is another matter.

The floor is lava

While the process may start off the same each time, the game's real-time physics is both good and bad. It means each level will be slightly different when replayed at least, but you'll also need a little bit of luck on your side to get the best result.

When you just can't seem to get the right rhythm or the right speed it can be quite disheartening, especially if you're barely out the gate. The difficulty curve definitely steepens quickly. 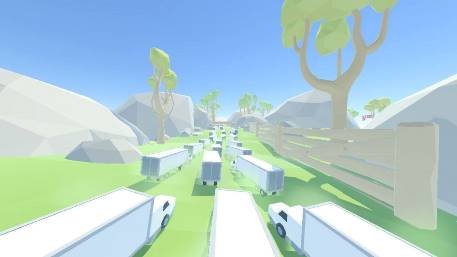 Its controls may be nice and simple, but when using the right analogue stick to look around it's way too sensitive. Any point the track curves around a corner, looking in the correct direction is a real chore and incredibly frustrating in such a fast-paced game.

For hardcore gamers there's a long, grueling process to knuckle down with. You might even get addicted to that incredible rush you feel when completing a level.

For the average gamer, however, you'd best be patient, because Clustertruck isn't going to hold your hand. No, it's going to kick you in the shin, rub your face in the dirt, and then help you up afterwards with a question of 'no hard feelings?'

Clustertruck may be fun for short periods of time, but it's also hard and unforgivable and eventually that can grind you down
Next Up :
Star Discord review - "Needs polish, but it's shaping up to be a true RTS on the go"

6 ways Clustertruck & The Final Station will test your 'driving' skills