In Clash of Beasts, you step into a world where mighty beasts and monstrous titans roam the land. Will the Beastmaster's Spark within you help you tame these primordial forces? Can you keep them under your control, or defend your stronghold against these unstoppable beasts rampaging in the wild?

The idea of training and collecting these gargantuan powerhouses should sound appealing enough, but just in case you need more reasons to dive into Ubisoft's original war strategy title Clash of Beasts, we've got a few more right here. 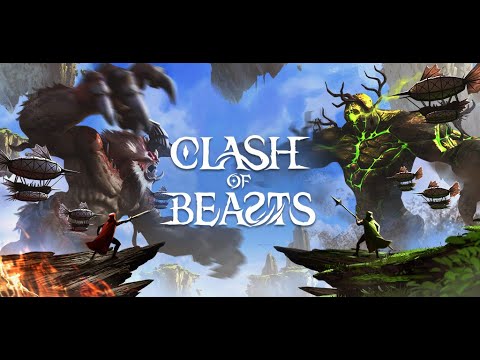 An enchanted land where beasts roam the earth

Welcome to Veren, where you, as an aspiring mercenary Captain, step onto the shores of the New World in hopes of following in the footsteps of Lara Malorn. Not only is she a mercenary commander known throughout the land, but she's also your mother, and expectations of your abilities are high.

You are in possession of the Beastmaster’s Spark. When your settlements are raided while you're away, tragedy strikes - your mother is captured and used as a blood sacrifice by Gideon Morvus. Now, with the livid fire in your heart and the thirst for revenge coursing through your veins, you must gain the strength you need to defeat Morvus and keep him from taking control of the ancient being Shivara.

A whopping 65 beasts can dominate both the land and the skies under your control, as you rain down death and destruction on your foes. You can collect, train, and experiment with a wide variety of beasts, tinkering around with their unique classes to best suit your combat strategy. There are different spirit combinations to discover and legendary monsters to unlock on your road to becoming the ultimate Beastmaster.

Beasts require Soulstones to summon, and some can be merged to birth other creatures. For instance, parent beasts Shadescale and Talvara can create Brightwing, Shalegrasp, and Iridoz. Beasts have different affinities as well - for instance, you should avoid attacking islands using beasts that have the same affinity as that island. Otherwise, doing so will reduce your beast's attack power and mana recharge.

On the flipside, Clash of Beasts tasks you with fortifying your defenses against those who would use the wild beasts to bring your stronghold down. You can unleash your inner tactician with different tower placements and more than ten towers to synergise. Each tower will have its own offensive skills, unique effects, and other attributes.

Now, defending your settlements needn't be a solo affair. Teamwork can spell the difference between victory and defeat - you can loan beasts from your online buddies should you need a helping hand to drive off would-be invaders at the gates.

Speaking of online pals, you can join a guild and conquer territories with your allies. Coordinating attacks with your guild can help you storm enemy strongholds and lay siege to their territories across the globe. There will be fresh content every new season - plus weekly events that yield generous rewards - so there's always something to look forward to when it comes to rare beasts, limited skins and more.

Ubisoft's war strategy game features real-time dynamic 3D action gameplay that lets players fortify their strongholds and wage beast warfare against enemies. If you're eager to start your collection and forge your path as the ultimate Beastmaster, you can download Clash of Beasts on the iOS App Store or on the Google Play Store for Android devices. It's a free-to-play game with in-app purchases.

Download Clash of Beasts now to get exclusive avatar x1, soul shard x 150, only available for players who join before 24th Jan 2022!

To discover more about the lore of the game, you can also head on over to the official website or check out Clash of Beasts’s social media and video channels via the links below:

What's A Preferred Partner Feature?
From time to time Steel Media offers companies and organisations the opportunity to partner with us on specially commissioned articles on subjects we think are of interest to our readers. For more information about how we work with commercial partners, please read our Sponsorship Editorial Independence Policy.
If you're interested in becoming a Preferred Partner please click here.
Next Up :
App Army Assemble: Perfect Grind - "Does this skateboarding game successfully bring the thrill of the sport to mobile?"

Clash of Beasts, Ubisoft's strategy-based monster battler is out now on Android and iOS