If adventure games are your preferred prescription then Catopia Rush, which combines the best of popular aRPGs with stylish, cute visuals, might be exactly what you've been waiting for.

Over the last week, we've been playing through the cutesy adventure-rpg Catopia, well ahead of its planned soft-launch (16th September) and late-October release date. It's been an absolute delight, not least due to its hero-collecting antics, but also in its interesting twist on the normal aRPG style. In Catopia Rush you don't attack unless you first move, but from that point, it's a free-for-all, with your allies rushing into battle - complementing or conflicting with each other depending on how you assume your team.

In this way, it's almost an inverted twin-stick shooter. In those games, your aim is to rarely stop moving, to dance between enemies - and their projectiles - through a constant stream of inputs. Catopia Rush operates instead on the moments between movements, with your team attacking while you are mid, or freshly-finishing movements. It also feels quite close to minion-command games like Pikmin or Undead Horde where you influence your unit's moves indirectly. It's much more about creating complimentary fusions, levelling them up with in-game currency and tweaking your team as you come up against tougher-and-tougher odds. 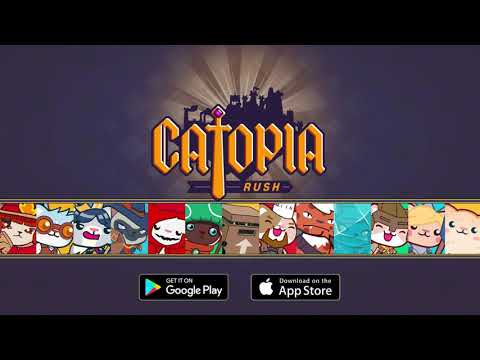 And, in case you hadn't guessed from the title or media, everything is delightfully feline-themed. You'll have chef cats, toast cats, regal cats and much more all available as options for your team within your first hour of play. It doesn't slow down either, there are dozens of cats available and each one  - once unlocked - can be levelled up if you deem them worthy of a place on your team.

You'll need to pick your team carefully, the reward for a successful dungeon-dive is far more than the currency needed to strengthen your squad - you can also rebuild a city, buildings and all, which open up a mass of new ways to play.

Catopia Rush will be available in Soft-Launch in September, with a full release for both Android and iOS devices planned for October this year.

Head to the Pocket Gamer LaunchPad hub to find all of our exclusive announcements from our three-day event.
Next Up :
Rivengard, a fantasy RPG by Snowprint Studios, is featured in Apple's Founder's Campaign alongside an assortment of other great games