Set in a vibrant world of magic and strange creatures, Catalyst Black is the second game from Vainglory developer Super Evil Megacorp. It's an ambitious cross-platform battleground shooter that aims to evolve its genre while delivering a deep combat experience and an inventive drop-in, drop-out multiplayer system.

The game has been built using the team's console-grade E.V.I.L. game engine and has been designed to be "cloud first" and cross-platform ready, with controller support available from the get-go. 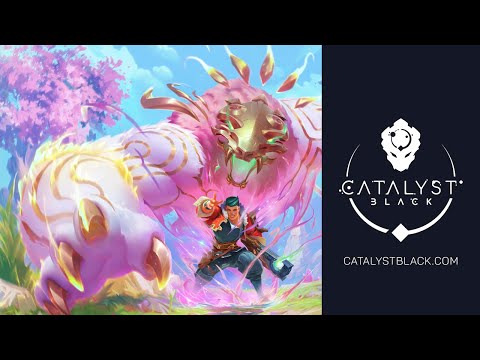 That said, the game is launching first on mobile until the core experience has been perfected. When the time comes for it to expand elsewhere, you can expect content and competitive parity, allowing players to band together regardless of their chosen platform.

The focus here is placed on large-scale battles featuring teams of 10+ players. Matches combine layered combat and strategic objectives, such as taking down roaming monsters or setting out to capture the enemy flag.

The combat itself aims to be layered and malleable, giving you the chance to try different combos of customisable gear, weapons, and abilities. It's very much about player experimentation and devising your own strategies. Interestingly, you'll also be able to equip special masks that allow you to transform into a primal god.

The drop-in, drop-in nature of its multiplayer means that you can get into the action quickly and with minimal fuss. It sounds like waiting to join a party or suffering through lengthy matchmaking times will soon be things of the past. Instead, you can jump directly into a friend's game by tapping on their name, while those going it alone can easily join in-progress matches.

Beyond its gameplay innovations, Catalyst Black also introduces an all-new environment authoring system and updated technologies that have allowed the team to create stunning environments. The move from pre-baked environmental lighting to full dynamic lighting, as well as upgrades to the team's animation system, should be immediately apparent.

Though despite its good looks, Catalyst Black also aims to be playable on the broadest set of devices. The team is said to have adopted a new approach to back-end services in order to give players a more reliable and performant game across the board, now boasting optimised performance, rapid downloads, and the ability to leave the smallest possible memory footprint.

Head to the Pocket Gamer LaunchPad hub to find all of our exclusive announcements from our three-day event
What's A Preferred Partner Feature?
From time to time Steel Media offers companies and organisations the opportunity to partner with us on specially commissioned articles on subjects we think are of interest to our readers. For more information about how we work with commercial partners, please read our Sponsorship Editorial Independence Policy.
If you're interested in becoming a Preferred Partner please click here.
Next Up :
Space War Battle Cadet DX lets you match colours to defeat enemies, out now on Android