Catalyst Black is Super Evil Megacorp's follow-up to its beloved MOBA Vainglory. It looks to be both an evolution of what the developer does best and something completely new. In fact, the team has even come up with its own subgenre name, "battleground shooter", to describe how it plays.

Intrigued to learn more, I spoke with Super Evil Megacorp CEO Kristian Segerstrale to discuss the upcoming mobile game, which is set to enter iOS early access on August 12th. 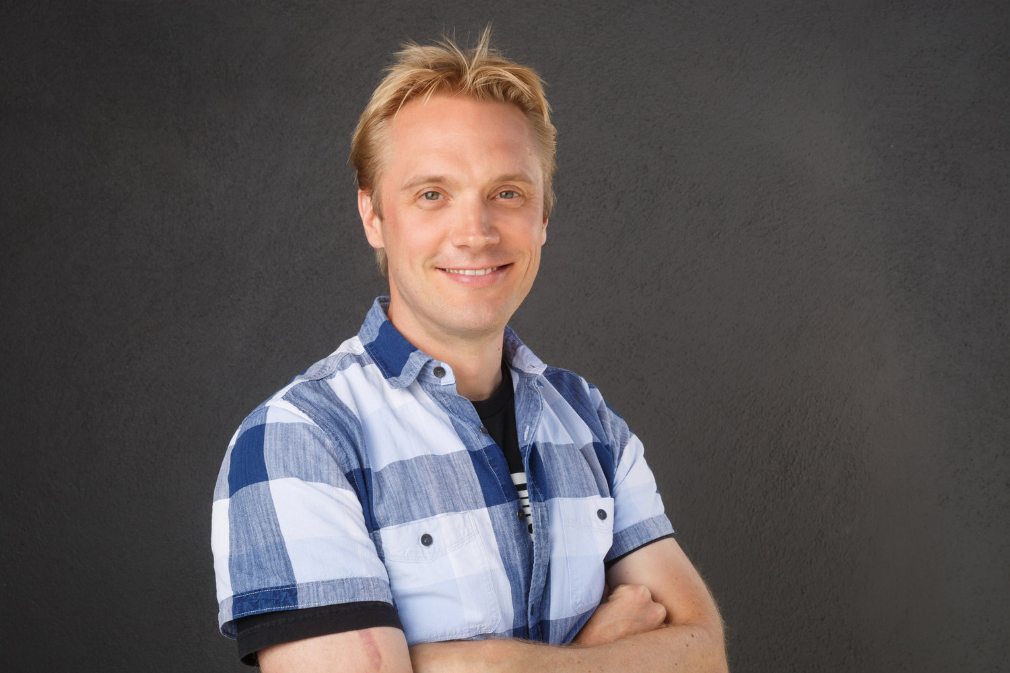 We don't really think of games generationally on mobile, but from a technical perspective, Catalyst Black sounds like a giant step above what the team accomplished with Vainglory. How has honing and utilizing your own proprietary engine helped you to achieve this, and what are some of the standout technical changes/improvements we can expect to see?

We at Super Evil Megacorp believe that owning our engine lets us build truly unique player experiences that push the boundaries of the industry. Knowing what the code does all the way down to the bare metal means we can build a company culture that does not take "no" for an answer, and establishes our own rules. Our engine is what enabled us to showcase Vainglory's MOBA gameplay on the Metal API on an iPhone 6 on stage with Apple in 2014 with hundreds of actors, thousands of dust particles, butterflies and incredible graphics all while running at 60 FPS.

With Catalyst Black, we have taken this technology to the next level; we have introduced a whole new environment authoring system and technologies that let us create beautiful, performant maps much faster. We have moved from pre-baked environment lighting to dynamic lighting to allow for more variety and flexibility while reducing our file sizes. We have also upgraded our animation system substantially to allow partial animations for strafing, transformations and much more. The result is a unique graphical look, hyper-responsive and tactile gunplay on the broadest set of devices.

As a learning from Vainglory, the team invested a lot of extra time optimizing for performance, faster downloads and the smallest feasible memory footprint. We have also taken an entirely new approach to the back-end services for a more reliable and performant player experience across the board.

The cross-platform learnings from Vainglory also allowed us to bring game controller and mouse and keyboard support in from day one. We will be prioritizing mobile platforms first, but we want to make it be able to hold its own on any platform once we've worked with the community to get the core experience right.

What lessons have you taken from Vainglory into Catalyst Black?

We spent a lot of time analysing both our internal learnings and community feedback from Vainglory before setting the direction for Catalyst Black.

Catalyst Black refines further many of the things we built and loved in Vainglory. We've kept the top down camera and the fluid, precise combat rhythm. Catalyst also shares some of Vainglory's design philosophy around rewarding individual mechanical skill as well as team tactics and strategy. And of course the focus on creating something unique and fresh that we feel really stands out from other games.

There are also many important areas where we wanted to depart from some of the decisions we made in Vainglory. Unlike Vainglory, Catalyst Black has a loot-based economy, meaning you have access to 1,000s of combinations of weapons, abilities and other gear that form your loadout. This allows for much more customization and progression toward your own perfect playstyle.

Drop-in, drop-out - or “DIDO” - is also a major area of innovation for us. Different from Vainglory - and most other multiplayer games - we wanted to eliminate waiting to get into a game, and the anxiety of leaving mid-game, so we designed Catalyst Black entirely around a drop-in, drop-out model, letting you join a friend's game or another game in progress vs having to wait for lengthy matchmaking or for friends to join your party. And for you not to feel bad when life gets in the way and you need to abandon a match halfway through.

Technically, we also spent a lot more time improving our engine for performance on lower-end devices, as well as authoring tools and pipelines, letting us create updates, maps, game modes, weapons, etc much faster to be able to serve the community better over time. 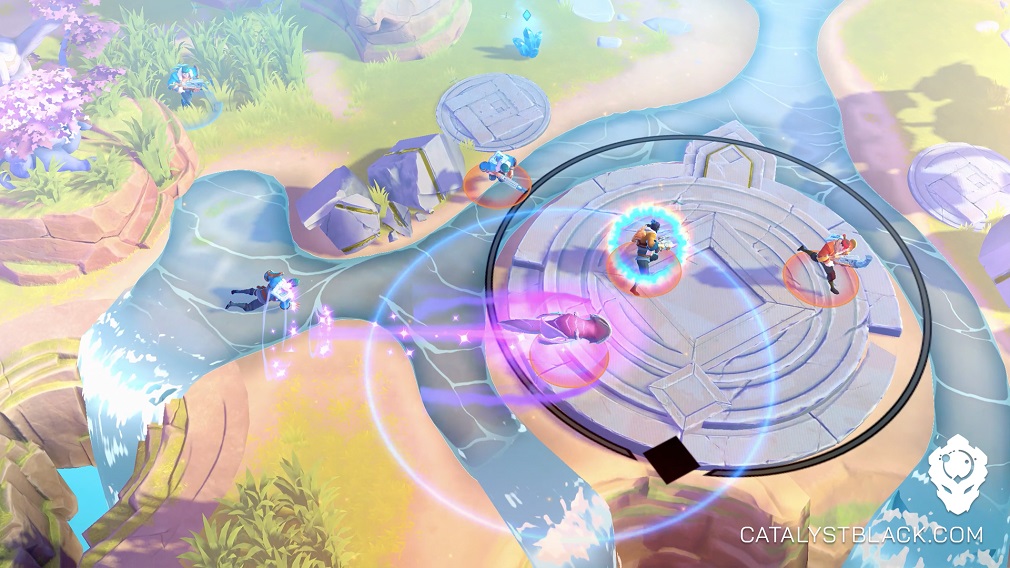 How does Catalyst Black evolve its genre? What are some of the new gameplay mechanics that it introduces, and how do transformations alter the core gameplay?

It is actually difficult to fit Catalyst Black into an existing mobile genre. We call it a "battleground shooter".

When designing the gameplay of Catalyst Black, we wanted it to really stand apart from other mobile multiplayer games in its sense of scale, its level of combat refinement, as well as bringing a transformation fantasy into a shooter.

Catalyst Black allows for teams of 10+ to play against each other and neutral monsters at a scale of maps that are several times the size of most other shooters. This allows for a varied combat experience ranging from 1v1 duels to squad skirmishes over minor objectives to large scale all-out mayhem over major ones. It also brings a sense of strategy, tactics and teamplay to the game.

For combat refinements, we spent a lot of time on controls, aiming and camera in particular. We wanted to create something that feels intuitive and easy to learn, but still precise and with a high skill ceiling. We were very inspired by the evolution that Halo represented for console shooters, and wanted to make a similar mark on mobile shooters.

With transformations, we wanted to bring a different creative fantasy to a shooter - to be able to "bring a god to a gunfight". Transforming into a primal is conceptually similar to a "super" or an "ultimate" - you get that hero moment as a player when you alone can turn the tide of a battle. It further adds to the strategic and tactical dimension of the game.

The loot progression and drop-in, drop-out mechanics are pretty meaningful differentiators for the overall experience but we covered those in the previous question.

The long-term dream would be for Catalyst Black not to just be a success on mobile over time, but to be equally respected as an evolution of the genre on PC and console. But we need to crawl before we walk and work with the mobile community first to get the experience right. 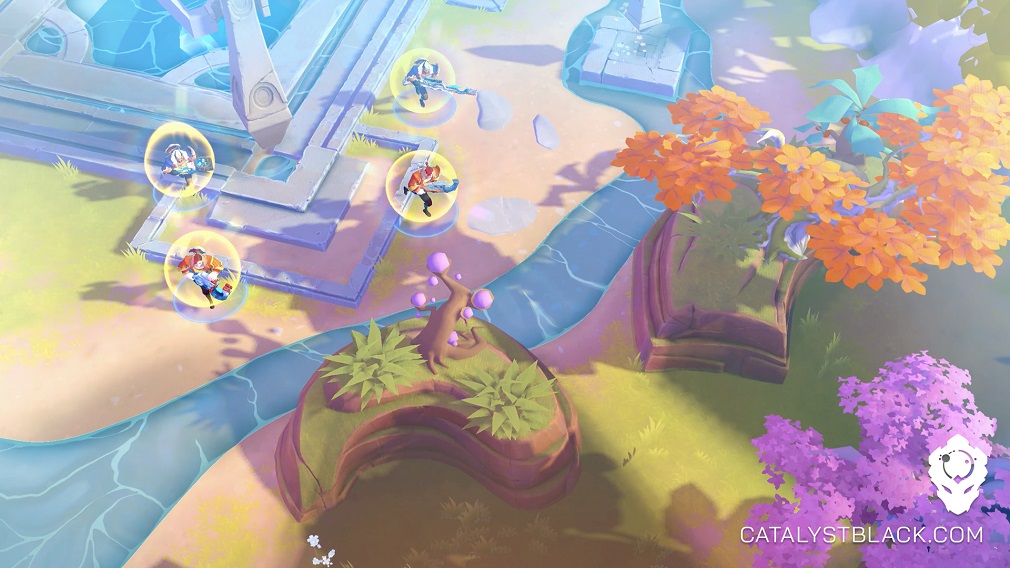 How has the game's matchmaking system evolved when compared to Vainglory's?

Matchmaking in Catalyst Black is fundamentally different from Vainglory and most other multiplayer games.

For most game modes, Catalyst Black matches will accept players joining and leaving mid-match. This means that there is always a match available for you to drop into when you log into the game.

We expect the main way to play the game to be to start the app, look at what your friends are playing, then tapping their name to drop straight into their match. If no friends are playing, you can also just tap play and the matchmaker will pick the most suitable match and the most suitable team for you that is running right then and there - meaning you will be in the action within seconds. We love the immediacy and accessibility that comes with this.

We've been spending a lot of time looking at the corner cases of what happens in different drop-in or drop-out situations to keep the experience fun for everyone. And this is one of the things we want to really test out and get right during our early access period.

From where did the team take inspiration for the game's strong aesthetic and setting? What can you tell us about its world?

With Catalyst Black, we wanted to create something different from the dark and brooding world of Vainglory. We wanted to create an inviting world that oozes magic and mystery, that is bright but dangerous. The world of Kyria has over time been injected with a magic that the people don't entirely understand, but are happy to put to industrious use. The Chosen, our player characters in Catalyst Black, carry masks that are capable of transforming the wearer into primal beings from another realm. This divine tie between the individual and the primal is an aspect of the story we'd love to unpack more as time goes on.

Our art and technology teams spent a lot of time trying to find a visual style and feel that would convey this and stand apart as a result. The tech art and engine teams then worked on various ways to deliver that aesthetic and feeling without compromising on frame rates or readability of the action. As well as a story we can expand on over time. We're pretty happy with how it's come out so far! 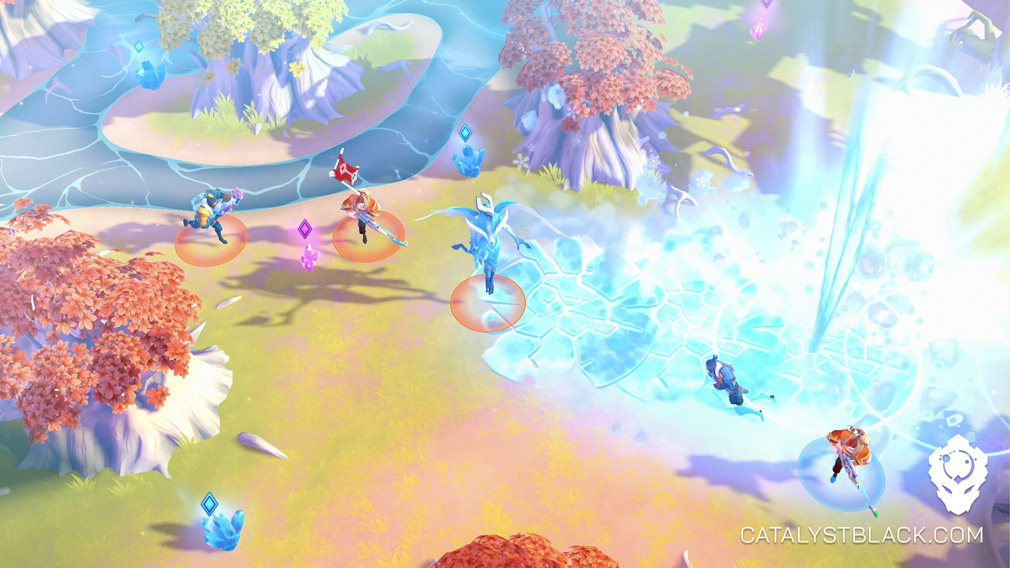 When you talk about Catalyst Black offering accessibility, what specifically are you referring to?

One of the learnings from Vainglory was that, while loved by many of our core players, the game felt inaccessible to players new to MOBAs. With Catalyst Black, we have been careful to retain strategic depth and a high skill ceiling, while working hard to create much more accessibility for more casual players. There are three key things we've worked on to make Catalyst Black accessible; drop-in, drop-out, the loadout progression system, and the combat design.

"DIDO" (drop-in drop-out) makes it quick and easy to play with friends while allowing players to gracefully drop-out when life happens and interrupts your game session. The loadout progression system lets players learn by changing one thing at a time, allowing you to easily learn weapons and abilities at your own pace. Finally, our combat design rewards high-skilled play and decision-making without punishing mistakes. Our death timers are low, and you can almost always help your team just by running behind friends and shooting where they're shooting.

We're also hoping to release Catalyst Black not just on the broadest set of mobile devices, but on other devices over time to let anyone, anywhere play with their friends.

Can we expect to see esports support for Catalyst Black? Has the game been developed with esports in mind?

We love competitive play. Catalyst Black certainly has the kind of pacing, rhythm and incredible outplays that make it entertaining to watch as well as play. At this point, we're super focused on just creating an amazing gameplay experience for everyone, however. We will decide on future game modes based on community feedback and how our early access players play.

Get involved by signing up for early access once it opens up on August 12 by joining our Discord server - or check out our website catalystblack.com for instructions.

How many players are being accepted into the early access test, and will it be a region-specific test?

We're hoping to have thousands of players involved within the first few weeks. We have no regional restrictions, although some regions may be earlier than others to maintain a good play experience.

What are some of your current concerns surrounding mobile gaming, and what types of games would you like to see more of going forward?

I actually don't have many concerns about mobile gaming. I'm incredibly excited that we're seeing more of the traditional game industry embrace mobile and mobile gamers as first-class citizens in the ecosystem. I'm excited to see more cross-platform play where the platform that you're on doesn't define your play experience. These are of course both trends that we're pushing ahead with as a company also.

Get yourself some free summons in One Punch Man: Road to Hero 2.0 with special promo code