Developer Flying Ants Studios initially launched Car Smash last year. It's a retro-styled, arcade racing game where the aim is to destroy as many other cars and objects as possible before running out of fuel. It has now been updated to introduce a whole host of new features and changes that will hopefully improve the experience.

First up there's a whole host of new tracks to race around whilst causing as much damage to other people's personal property as possible. These new tracks will feature a mix of two, three and four-lane tracks in an attempt to keep the gameplay feeling fresh. 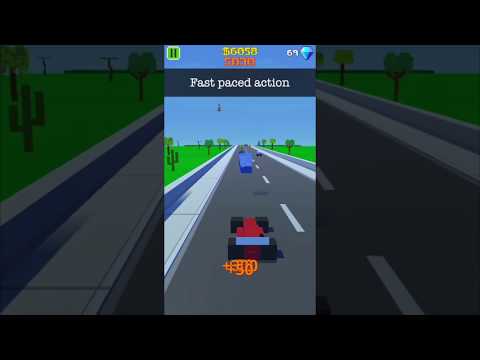 Elsewhere there's been a few changes to weather, with rain and thunderstorms now possible during the races. Similarly, Flying Ants Studios has also implemented a day and night cycle so you'll be able to speed into other vehicles at various times during the day.

They have also introduced a new level-based progression system to give players something to work towards. Similarly, players can now upgrade the cars that are in their garage alongside being able to obtain faster rides in general. Players can also find a Gift Box in the game now that will give them extra items.

The graphics have also been enhanced to show off all these new features with prettier visuals. Likewise, the car destruction has also been improved so that hopefully players will get more satisfaction from driving into other vehicles at high speed before watching its blocky remains tumble across the track.

Finally, there are now two different control schemes players can make use of. The first is swiping whilst the other makes use of tilt controls. So if you have a penchant for tilt controls over swiping, you can now make that choice.

Car Smash is available now over on the App Store and Google Play. It's a free-to-play game with in-app purchases.

Looking for other racing games on mobile? Here are 25 of the best available for Android
Next Up :
Blast Waves is a roguelike tactical arcade shooter launching for mobile later this month