Brilliance: Catch the light is the recent iOS release by solo developer Lajos Farkas (Sprightly Wolf) and its light-based puzzle gameplay is making quite a few waves (excuse the pun) amongst puzzle fans.

Using an extremely sophisticated set of algorithms, Brilliance tasks players with manipulating light to solve its logic based puzzles through the use of refractions, reflections, and colour combinations. The game is both scientifically sound and straight-forward in terms of its mechanics, but, like all good puzzlers, these mechanics are deceptively simple, presenting challenging yet near limitless possibilities for finding solutions and testing your logical prowess. 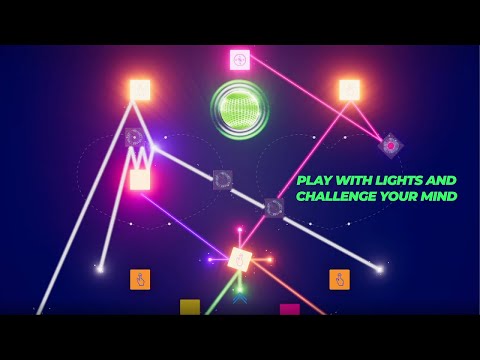 As a big supporter of the indie scene, we took the opportunity to interview the game’s developer to learn about the challenges, inspirations, and reactions to their stunning debut title.

First off, what do you think Brilliance: Catch the light offers that you can’t get from any other title on mobile?

There are hundreds of logic-based games out there, but there are only a few that require real systematic thinking. With Brilliance: Catch the light, I wanted to make a seriously thought-provoking and challenging game.

The first 20 levels are quite easy to solve, but they are very important for understanding how the light elements in the game work. As you get deeper into the game, it won’t be enough to determine the next logical step; you’ll need to know in advance the effects of the light beams; how they refract, deflect, and recolour each other.

Fundamentally, Brilliance: catch the light is designed to test your logic rather than your dexterity or speed so, for the first half of the game, mostly common sense is needed; nothing else.

The real challenge comes after that in the latter half of the game where some of the levels turned out to be particularly mind-boggling. However, if anyone gets stuck in the game they don't have to get discouraged because they can get schematic help for the solution on every level; the ultimate goal is entertainment.

In my childhood, I drew and painted a lot and also tried my hand at photography. At that time, my dream was that as an adult I would be involved in some form of fine art. It didn't turn out that way later however, and for the past 20 years I’ve lived in a completely different field, but my love of colours, lines and lights has remained unchanged.

As a child there were no sophisticated computers and tablets, so the Rubik's cube was the first logic game that really moved me, and the task to mix and match the colours was born there. Sure, it was not in the way that can be seen in Brilliance, but in the end it contributed significantly to its creation.

This is my first game and my first project as an independent developer. It was a challenge in itself to create something completely new for me. I have IT education, but life has taken me far away from developer tasks in recent years.

The most difficult part of development however was the creation of the algorithm that handles the lights in real time. The light refraction itself is simple, but I tried to create an environment for the players where they have the greatest possible degree of freedom; they can play with the lights without limits, so the effects on the levels are undeterminable in advance. This is exactly what gives the game one of its special features, that there are countless solutions in most levels, there is no predetermined one that the player must follow in order to progress.

Also, I didn't want to simply increase the number of lights and game elements to infinity as the levels progressed, as the player would quickly get lost in the details. I tried to work with less light in a sophisticated way, relying more on refractions and other tricks. So often the problem is not the number of elements used on the levels, but how to combine those few ones in order to achieve the right result.

Which aspects of Brilliance: Catch the light are you most proud of?

This is my first game, so simplicity was a kind of priority, but I also wanted to create a game that no one had done before. To do this, I focused on the desire that lives in every child and in most adults as well: to be creative. It's already an indescribable feeling to complete a game, but, according to feedback so far, it seems to be a real challenge for the puzzle lover community, and that makes me very proud.

Do you have anything planned in terms of future updates and, if so, can you give us any details of what these might include?

In recent weeks, several people have asked me whether an Android version of the game is expected and, if so, when. Apple's devices, especially for retina screens are unique both in terms of size and colour display. In order to produce the wonderful colourful world drawn by Brilliance, suitable display hardware is needed.

Originally, I planned to make the game exclusively for iPad. The first test versions were made exclusively for this device, but in a later phase of the development it was installed on a 5.5'' iPhone out of "testing necessity", where, despite the smaller size, it works quite well.

I am currently conducting tests on various Android devices. My goal is to have Brilliance appear on the Android platform as soon as possible, but I want to make sure that the Android players get the same gaming experience.

Brilliance: Catch the light can be purchased right now from the iOS App Store for $2.99 (or your local equivalent). You can also visit the official website to find out even more about the game.

What's A Preferred Partner Feature?
From time to time Steel Media offers companies and organisations the opportunity to partner with us on specially commissioned articles on subjects we think are of interest to our readers. For more information about how we work with commercial partners, please read our Sponsorship Editorial Independence Policy.
If you're interested in becoming a Preferred Partner please click here.
Next Up :
Yeager preview - "Exhilarating monster hunts, but with lifeless eyes"

Brilliance: Catch the light, a new light-themed puzzle game where you reflect beams to clear levels, is out now for iOS