Does any genre harbour inquisitive and creative players while simultaneously satisfying their wicked side quite as well as the bridge builder genre? No, I'd wager. In the shiny and new Bridge Builder Adventure, there's just something so fun about sending your gormless goblin avatar on its merry way across a wonky bridge, toward what is very likely a most dreadful demise.

The real USP with this one is that you're required to collect a glimmering key in order to unlock the gate at the end of each level – simply making it across the game's many chasms in one piece is no longer enough. This idea causes a good deal more disruption than you might initially be led to believe, as the levels eventually demand the most absurd feats of engineering on your part, including, but not limited to, intentionally sloping your bridge halfway down a frosty cliff face.

As a free to play game with 60 levels spread across 4 fantasy-themed worlds, it feels fairly generous. Coins – which can be amassed partly through watching ads, waiting for your chest to fill, or completing worlds – are used to unlock hints or buy your way into each new level. Though, more often than not, you'll be spending most of your savings on the game's various power-ups.

There are four power-ups in total, with the magnet being used to attract the key on each stage, the "easy mode" power-up strengthening your building parts, the space power-up lowering gravity, and the speed power-up making your vehicle a little, well, speedier. And while they never develop into an integral part of the experience, I'm sure less adept players will benefit from their addition. 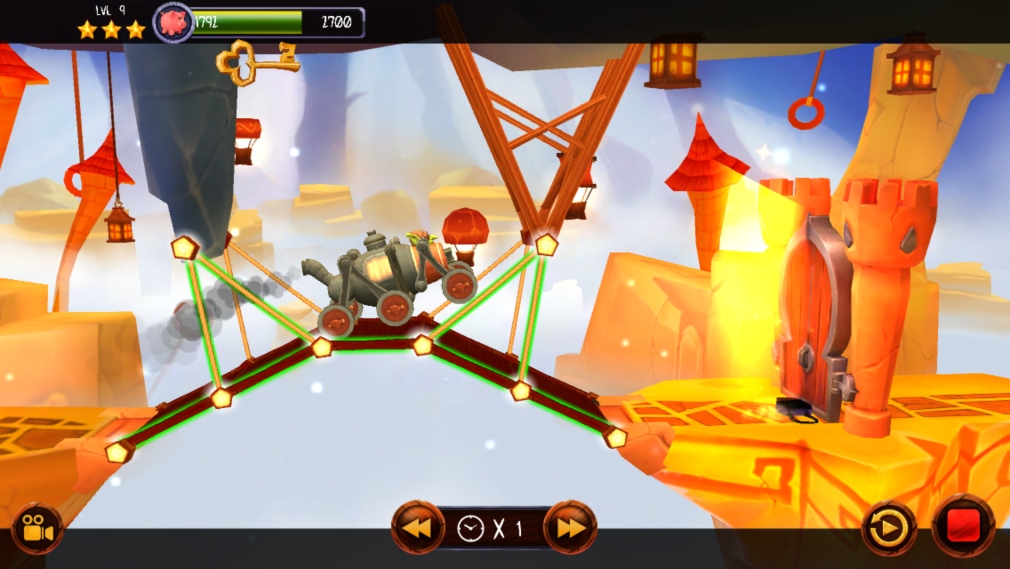 In a similar vein, the game also does a good job of carefully dolling out its mechanics – allowing ample time for them all to be explained and tinkered with. The result of this smart, measured approach to tutorials was that I never felt ill-equipped to take on each fresh challenge, and this was achieved without the need for a dozen pop-up explainers right out of the gate.

Sadly, the flow of creativity can occasionally be stunted by the odd accidental button press or positioning difficulties. Trying to connect the various parts together, while certainly aided by the optional transparent grid, can be a little finicky on smaller screens. Therefore, those with more sizeable devices (or less chubby thumbs) will surely benefit from the added space.

I'd probably describe its general style as being clean, exhibiting little of the visual clutter that continues to muddy the look of many a mobile game. That being said, despite the somewhat fresh setting, none of the game's character or level designs are likely to stick in the mind. It's also equally disappointing that any potential for comedy or even the slightest of narratives is left wholly untapped.

Similarly, the music, while charming in small doses, never quite materialises into anything special. It's a real shame that everything peripheral to the core building is typically bland, as it puts a damper on what is otherwise a mostly reliable, entertaining little game.

With a bit of control optimisation, an even greater emphasis on its key collecting idea, and a sizeable injection of personality, I could see this flowering into something pretty special. As it stands, proceedings in Bridge Builder Adventure admittedly never drop below being decent, but, with such tough competition already on the market, it needed something else – something more – to give it that all-important edge.

Bridge Builder Adventure offers a slightly irregular bridge building experience, but it doesn't go far enough to differentiate itself from the heavy hitters of the genre
Next Up :
UFO99 review - "A fun little arcade game on the go"