Blue Archive gave fans a brief look at its roadmap for the next few months which contained a tonne of events, main story events, and a lot more. Over the last week Nexon also celebrated the game’s half anniversary with numerous rewards given out to players. Today, we learn of a new story event, Bunny Chasers on Board, that will now be part of this month’s line-up which is now touted as Blue Archive month.

Bunny Chasers on Board deals with the C&C tirelessly trying to hunt down the White Rabbit. This elusive mischief maker has now made her way to a luxurious ship and if the C&C want to catch her, they must change the way they look. Thus, we see the Cleaning & Clearing crew members dress up as Bunny Girls who they can catch Millenium Science School’s White Rabbit. 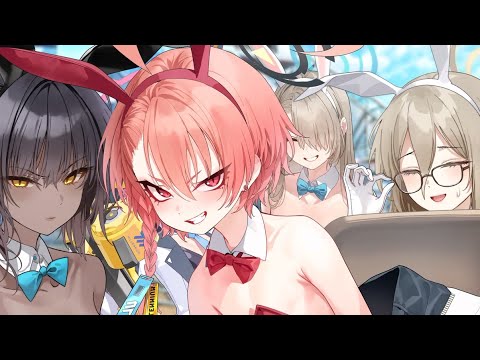 Players who pre-registered for the event in advance will now receive 1,200 Pyroxenes for free. Throughout the event, they will also collect numerous chocolate coins, bunny stickers, and boarding passes which can be used to purchase items like the Intact Phaistos Disc, Superior Tactical Training Blu-ray, Asuna’s Eleph and more from the event shop.

Two characters from Blue Archive also receive fresh looks. Neru (Bunny) is a Tank with an Explosive Attack Type whose EX skill can transport her to a particular location while creating a barrier with it. Karin (Bunny) on the other hand, is a Mystic Type Dealer capable of dealing damage in a fan-shaped area with her EX skill. Both of them are 3-star characters and will have unique Recruitment Events that will run until May 17th.

Begin your journey to catch the White Rabbit by downloading Blue Archive for free on the App Store and Google Play.

Also, check out this month’s redeemable codes to get some extra free goodies on Blue Archive!
Next Up :
Root launches Root: Exiles & Partisans & Vagabonds expansion pack for mobile and PC