Blood & Laurels is an intriguing political thriller set in ancient Rome, and available now on iPad

Versu released its first interactive fiction (IF) on iPad today called Blood & Laurels. It's a thriller full of political intrigue, and set in ancient Rome.

Written by prolific IF author Emily Short, Blood & Laurels feels like a piece of theatre as the play is found in the conversation between its actors.

I've only played it for a short while, but already felt tension between the dialogue, and the political weight of each decision.

It helps that small portraits of each character changed their expressions to match their mood. They felt more present than they would if it was entirely text-based.

A lot of this is due to the aims of the Versu platform Blood & Laurels is built on. You can read what it allows for here. 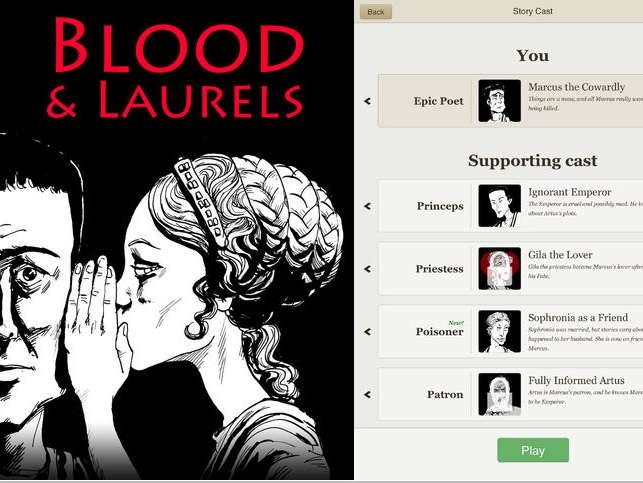 Anyway, you play as Marcus, who is a poet supported by an old general acting as his patron. You're under the thumb, but nowhere near as unfortunate as the slaves scrubbing the floors.

As with many IF, play is mostly about determining what actions to perform, or what direction to steer conversation. However, I was pleasantly surprised by being able to interrupt dialogue at nearly any point.

While sat around a dinner table, I decided to hand my patron some olives in an attempt to please him. A small gesture, but it felt like I had improvised within the script.

You don't have to try to keep your patron happy - it's up to you where you take the story. You can even betray him if you wish.

The official website teases that all of the following can be found: "Cults. Conspiracies. Poison. Stabbing. Blackmail. Seduction. Prophecies and rumors. Divine wrath."

Apparently, one playthrough of Blood & Laurels will mean you only see about a tenth of the entire game. There are lots of options to play with.

If you're intrigued to explore the game for yourself, you can purchase Blood & Laurels for £1.99 / $2.99 on the App Store right now.