Almost a full year since its launch in the Asian markets, Bless Mobile, the first mobile release to emerge from the Bless MMORPG series, is now available worldwide for iOS and Android.

The Bless series first appeared to western markets in 2018 with its debut PC release, Bless Online, swiftly followed by a console version in Bless Unleased. As a franchise it’s still somewhat in its infancy and therefore forgivable for not being a household name. However, the quality displayed in play tests for Bless Mobile leading up to its full release has demonstrated a standard of quality that matches the biggest and best MMO titles on the app stores right now. 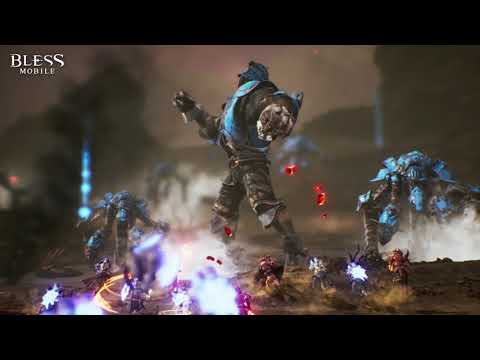 All of the features you’d expect of a modern triple-A MMORPG have been optimised for smartphones in Bless Mobile; farming, trading and economy systems, PvE and PVP combat, character classes, and in-depth customisation are all included with a robust level of detail, utilizing the latest Unreal Engine 4 to deliver stellar performance that can be enjoyed even on lower-end devices.

Among the many features that stands out about Bless Mobile is its combat mechanics. Camera rotation, attack animations, and character reaction speed is incredibly smooth and the abundance of attack and defence commands at your disposal with the onscreen d-pad which makes for an extremely dynamic experience. Making the combat even more dynamic still is the developer’s choice to incorporate a direction based system in which range of attack is determined by weapon type and range of motion, with the hit box always following the weapon’s path.

Prior to its global launch, Bless Mobile held a pre-registration period for eager fans that’ll now be rewarded with an exclusive ‘Ladis’ luxury belt, 500K Gold, and numerous other gifts. Those that didn’t pre-register won’t necessarily be left empty handed though as there are currently 10 different in-game events taking place with rewards on offer for those that join the game in time for its launch celebration, including the chance to receive a legendary class pet upon logging in for 4 successive days.

You can find Bless Mobile available to download right now for free from the App Store and Google Play.