Battlelands Royale is here to give us all a Fortnite and PUBG Mobile battle royale alternative that, unlike in those games, you can actually play and finish a game within a few minutes. Perfect for those of us that want battle royale action in more bitesize chunks.

That's exactly what the game is here for, and the isometric perspective makes it stand apart from its contemporaries.

If you're interested in an even more cutesy and easily digestible battle royale experience, Battlelands Royale is well worth a go, and we've got a bunch of tips to help you adjust. Not bad! 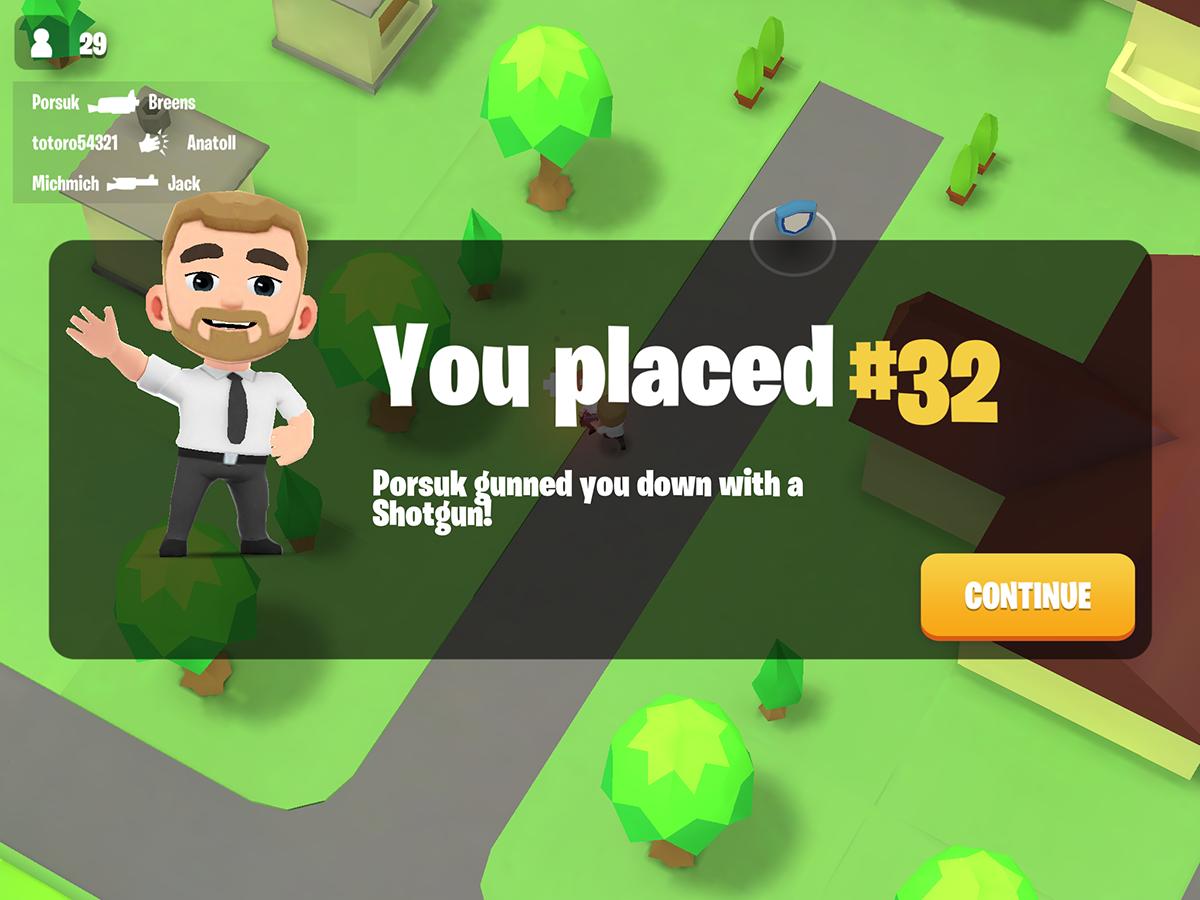 Going into battle without equipment? An act of suicide. That's why the very first thing you need to do is grab some weapons, and make sure you don't get beaten to the punch by anyone else.

There's a good variety of simple weapons, from ARs to sniper rifles, and you can simply use the second on-screen analogue stick to aim at enemies and fire away.

Grab a weapon type that best suits your playstyle before going absolutely anywhere, keep an eye on its ammo (the gun disappears once the ammo is gone) and take a look at its firing range before going up to someone. 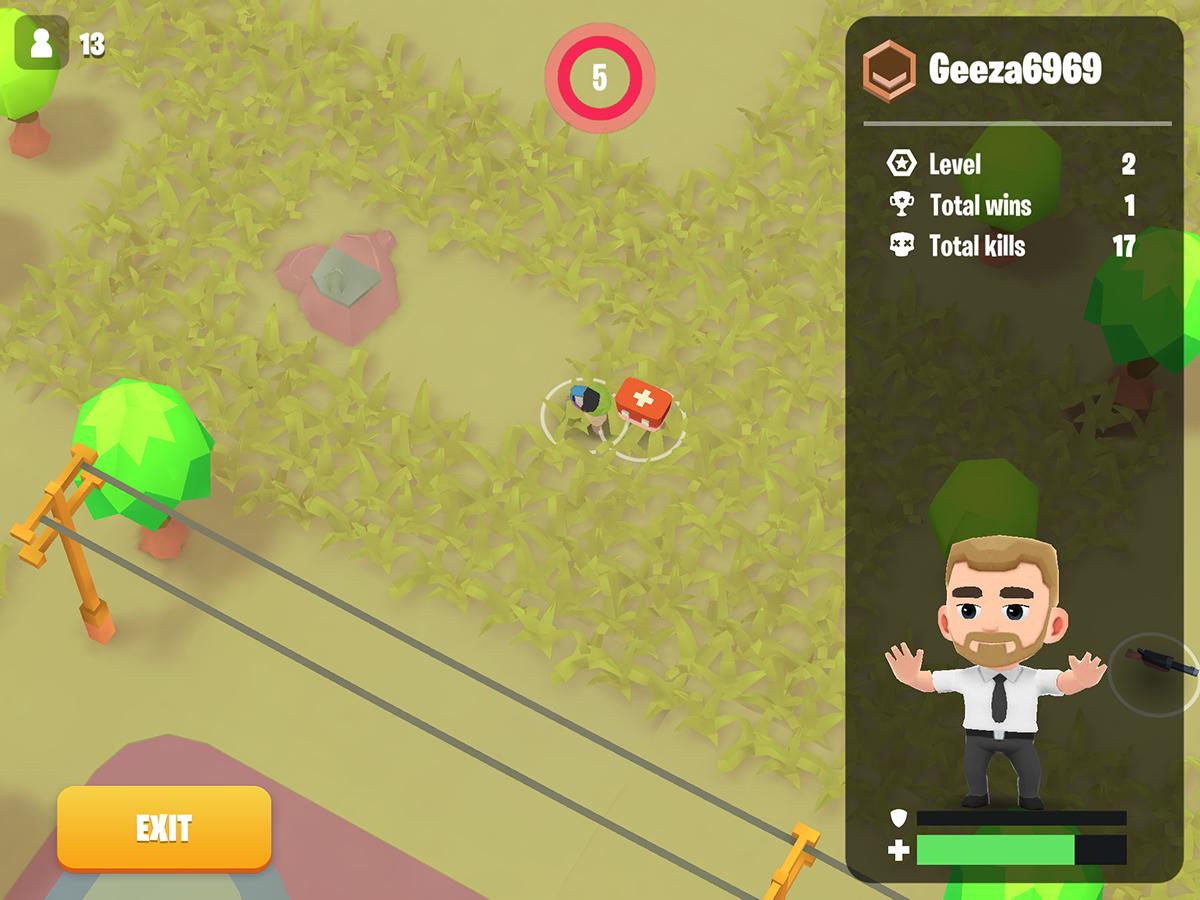 The second most important thing to grab? Shields, of course. Shields give you, well, a shield, which acts as a secondary health bar, and your first line of defense against bullets.

Yep, it's very similar to Fortnite in concept, and therefore just as important here as they are in that game. So make sure you shield is fully stocked up.

Ultimately, due to limited weapon range and simplified combat, whomever has the most health and shield will likely come out of these encounters on top. 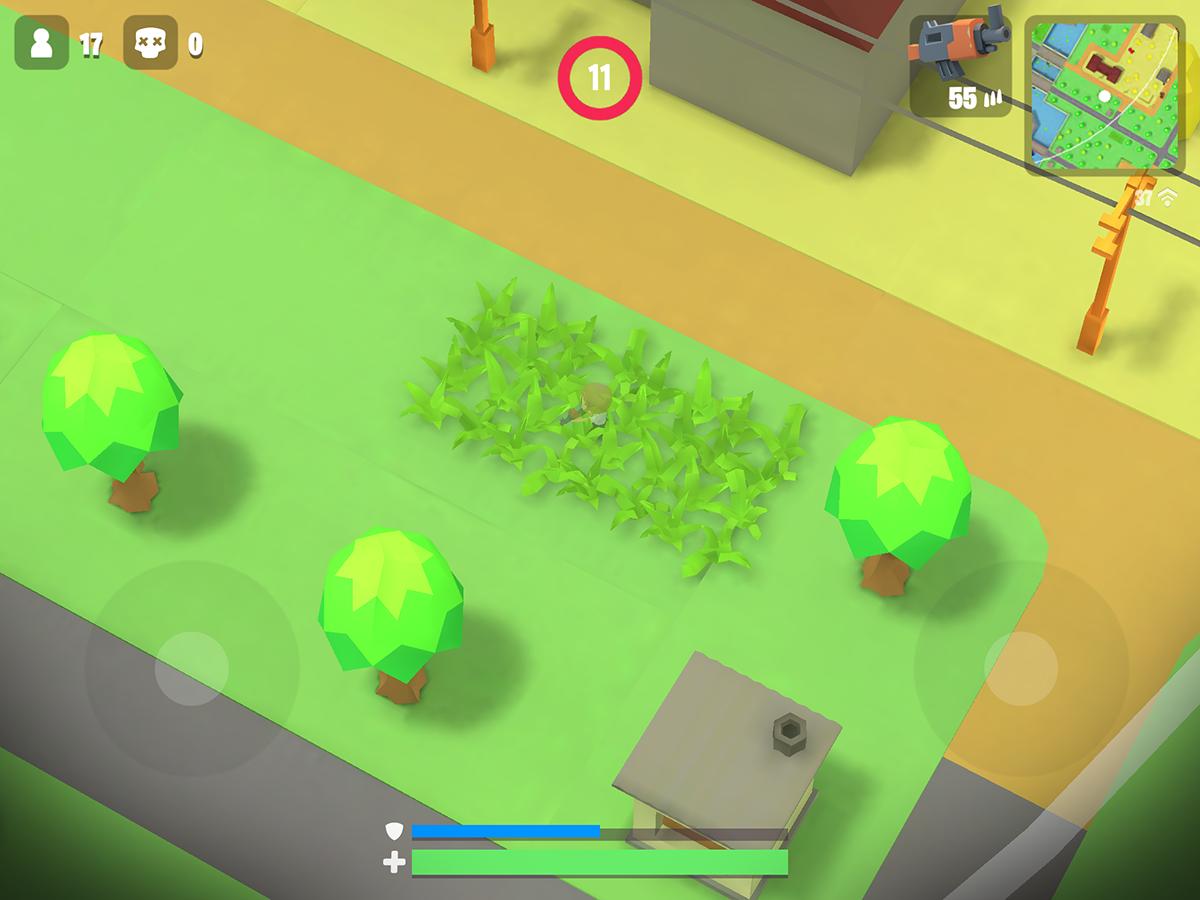 Yep, it's speedy. You really need to stay within the safe zone at all times - and head towards it immediately when it switches places - to stay alive.

If the danger zone catches up to you and you find yourself in the midst of it, well, unless the safe zone is very close, it's over for you, kid. 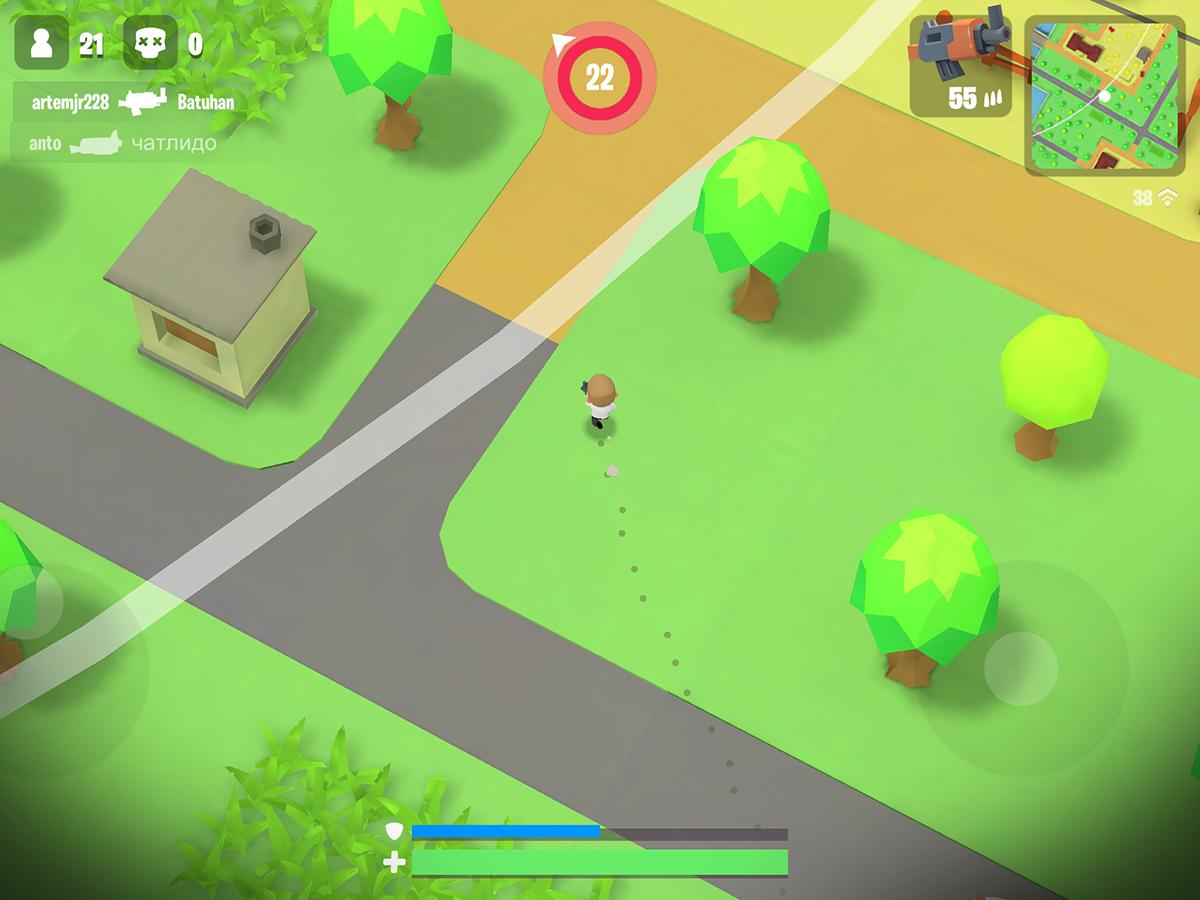 Unlike in other battle royale games, where stealth and cover is sort of non-existant and you just kind of hope you're vaguely camouflaged against the environment, Battlelands Royale actually hides you.

That is, when you're in the tall grass, at least. You'll go invisible, so you can hide away, but you'll also move more slowly.

Enemies will be hinted at your location, as leaves kick up and grass sways as you move. Still, better than being in the open, by far. 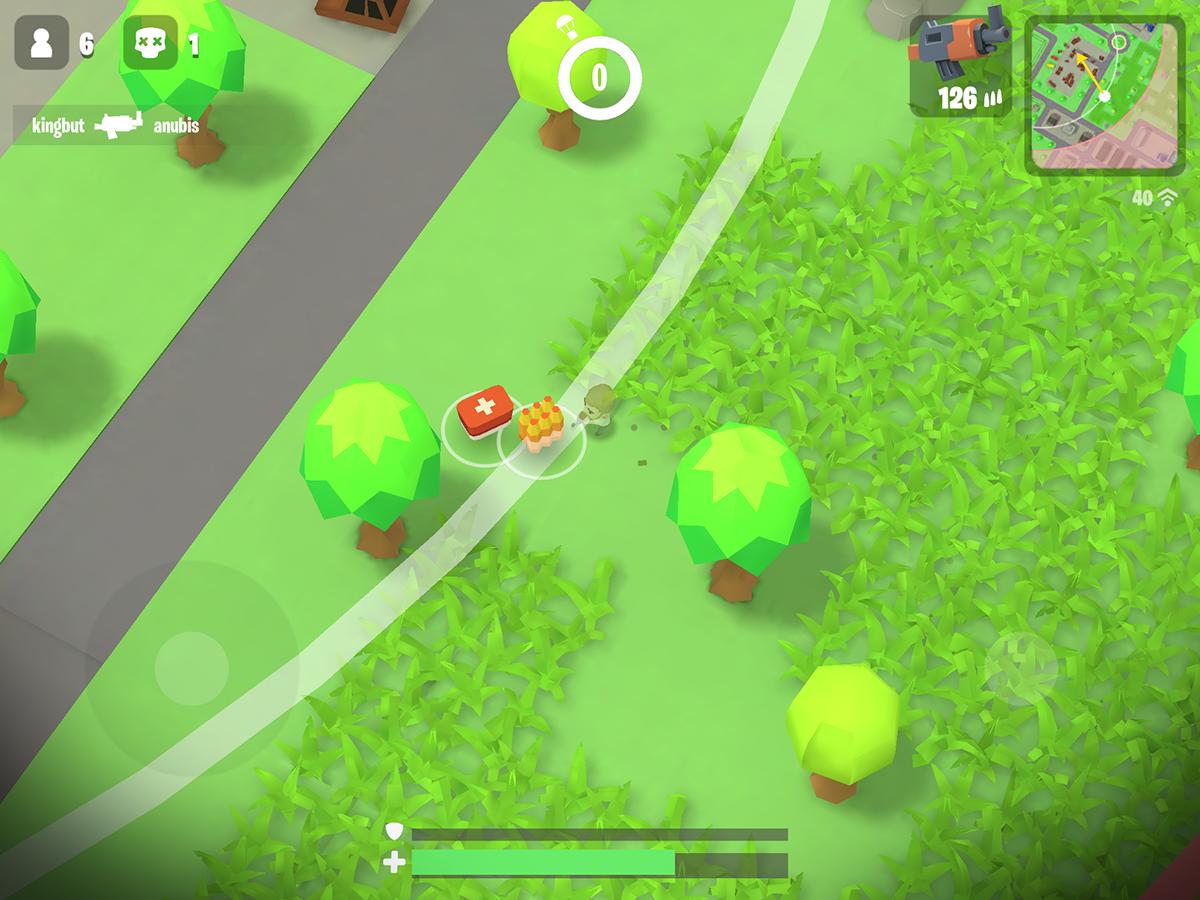 It's a battle royale game, right? That means you really need to finish off your enemies in order to win. Crazy, right?

Well, there's not 100 other players to deal with here, more like 40, and the games go a lot faster in a much smaller map, but that means if you stick near the centre, you're really likely to come across a bunch of enemies.

Remember as you aim/fire your weapon you'll see the range on the floor, shown by a line of dots. Anything that interrupts this line, even small objects, will halt your fire. That also means they make for good cover, though. 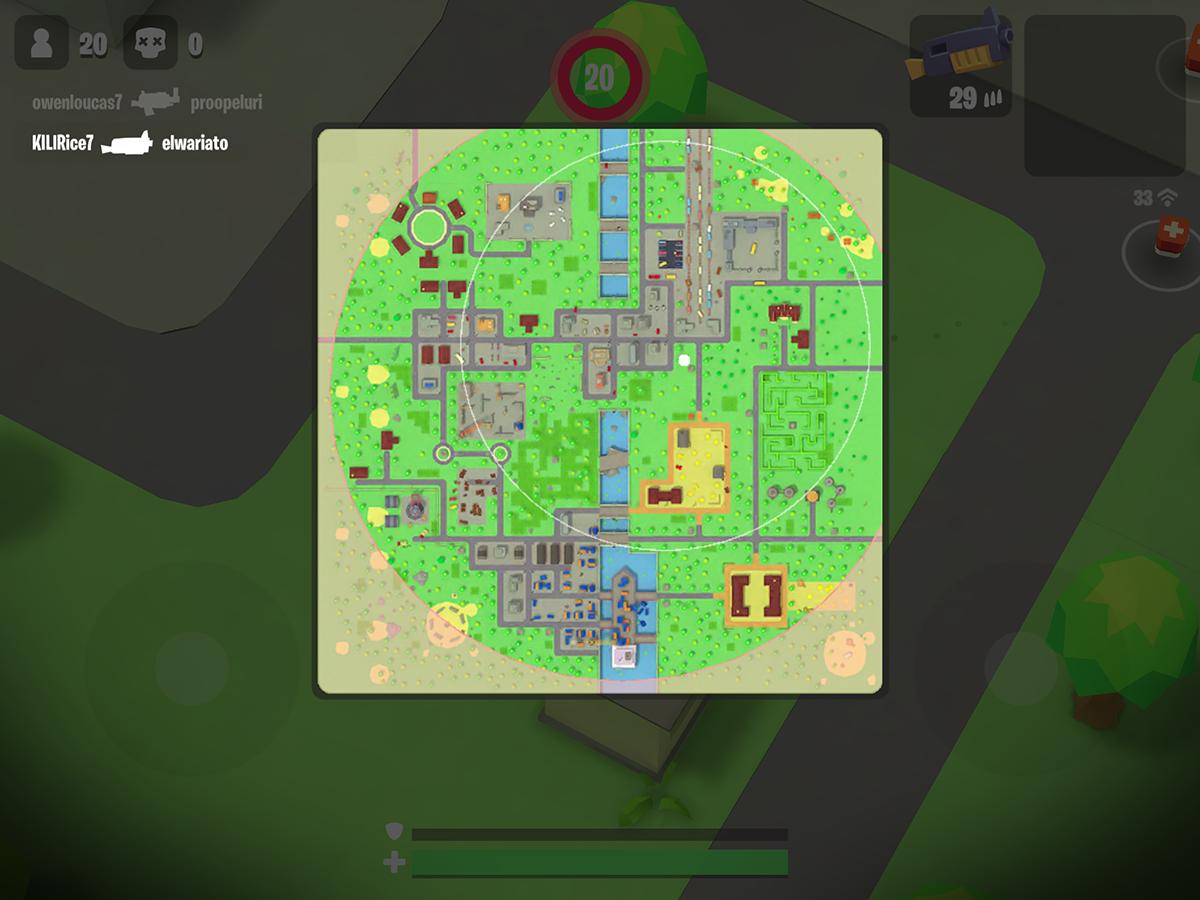